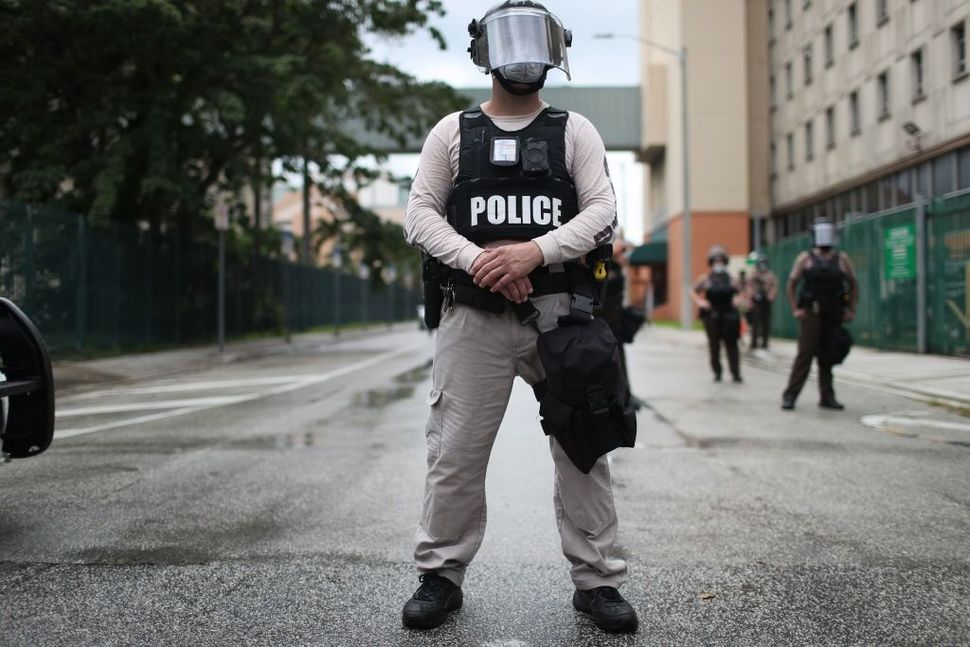 Miami-Dade police officers watch as demonstrators walk past during a protest against police brutality and the recent death of George Floyd on June 02, 2020 in Miami, Florida. Image by Joe Raedle/Getty Images

And they’ve known it for at least 15 years, which is how long federal officials and media investigations have been sounding the alarm about growing white nationalist recruitment among police officers.

“There are scores of officers facing inquiries over their connection to online bias and/or being in bigoted social media pages,” said Prof. Brian Levin, the director of the Center for the Study of Hate and Extremism at California State University, San Bernardino. “So it’s probable that we’re just getting the tip of the iceberg.”

Amid the recent rise in anti-Semitism, Jewish community leaders have grown increasingly reliant on local police for protection and security consultation. Some in the Jewish community are calling to reexamine this relationship, citing racism in law enforcement and the discomfort Jews of color might feel around police as a result. Levin, who is Jewish, argued that Jews could leverage the historic relationships with both the police and with African-Americans for the betterment of society.

“It gives us a unique opportunity to try to serve as a bridge with many others to address the horrible issue of racism which Jews in particular have a strong moral imperative to address,” he said.

The document warned of officers wearing “ghost skins,” white supremacist parlance for people who, in the FBI’s description, “avoid overt displays of their beliefs to blend into society and covertly advance white supremacist causes.”

The problem appeared not to have improved by 2015, when a classified FBI counterterrorism guide, acquired by the Intercept, noted that many suspected domestic terrorist investigations focused on extremists who “often have identified active links to local law enforcement officers.”

By 2019, an investigation by the Center for Investigative Reporting found hundreds of active-duty and retired law enforcement officers who had made racist posts or were members of neo-Confederate Facebook groups.

The problems can be found in cities big and small; there are around 700,000 police officers and sheriff’s deputies in America. In 2014, three of the 13 officers in Fruitland Park, Fla. (population 4,078) were found to be members of the Ku Klux Klan. And last year, 72 officers in Philadelphia were fired or suspended after an investigation into offensive social media posts.

While most prejudiced police misconduct is directed against African-Americans and Latinos, it has also affected Jews as well – a Howard County, Md. sheriff resigned in 2016 after investigators revealed he described black colleagues with the N-word and called a Jewish politician a “little Jew-boy,” and two Jewish cops in Philadelphia sued the department in 2018 alleging anti-Semitic discrimination by their coworkers, including etching Nazi symbols on one of their lockers.

“American policing is at a crossroads, where standards relating to equity and professionalism have to ferret out the minority of officers that engage in this dangerous subculture,” said Levin, a former NYPD officer.

Studies have shown that allegations of officer misconduct are not evenly distributed – that is, someone already accused of one complaint of excessive force is likelier than the average officer to have a second complaint, or more. For example, Derek Chauvin, the Minneapolis police officer charged with murder in the death of George Floyd, had 18 previous complaints against him over 19 years, which policing experts say is excessive.

There is no evidence that Chauvin is in any way tied to white nationalist groups. But Levin said that a pattern of complaints could be a tipoff for where internal investigators should look when trying to discover white nationalist sympathies.

“What we often find is that in many but not all of these cases, there are clues on the table that haven’t been acted upon: Statements around coworkers, statements on social media, or a pattern of complaints that indicates a systemic problem with particular officers,” he said.