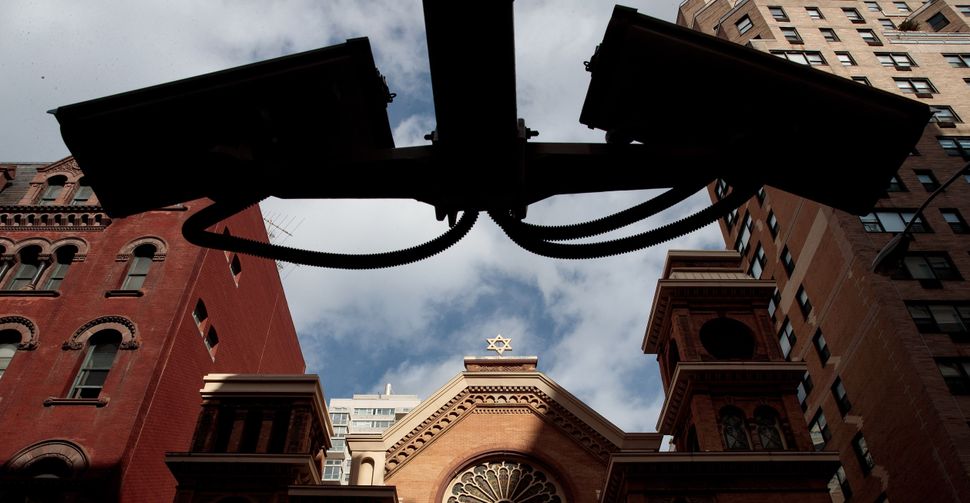 As the High Holidays near, some religious Jews are considering an unusual question: Are swords like jewelry?

In the time of the Talmud, one stream of rabbinic thought considered swords to be an adornment — and thus permissible to carry in a synagogue on the Sabbath and holidays. After a year in which a dozen people were gunned down while davening in synagogues in Pittsburgh and Poway, Calif., some rabbis are now arguing that guns, like swords, should be allowed under the “adornment” argument, especially in shuls too small to afford security guards.

It’s just one of the many ways that Jews are trying to make their traditions comport with reality going into one of the tensest High Holiday periods in memory.

The committee on Jewish law at the Rabbinical Council of America, the membership group for most Orthodox rabbis, has only just begun a wide-ranging inquiry into the nexus of security and halakcha, or Jewish law, according to Rabbi Asher Bush, the head of that committee.

“Security and safety are paramount. Shabbos is sacred. And we need to put both together in the best way we can,” he said.

Many congregants will welcome the heightened presence of police and private security guards, not to mention other, less visible mechanisms that synagogues are putting in place ahead of the High Holidays, which are the best-attended services of the year. Others — particularly Jews of color — are concerned that extra security will mean increased, and potentially hostile, scrutiny towards minority groups on their way to pray.

“How do we balance warm welcome with necessary security? I think that’s what leadership is really wrestling with,” said Rabbi Rick Jacobs, leader of the Union for Reform Judaism, the country’s largest Jewish denomination.

Jonathan Sarna, a professor of American Jewish history at Brandeis University, said that synagogue security on High Holidays has long been a barometer of which threats American Jews consider the most perilous. During the civil rights movement, synagogues hired security guards and some southern rabbis carried guns, fearful of bombings and assassination plots from the Ku Klux Klan and similar groups. After the terrorist attacks of Sept. 11, 2001, synagogues began hiring security guards for High Holiday services, worried that they could be the next targets. 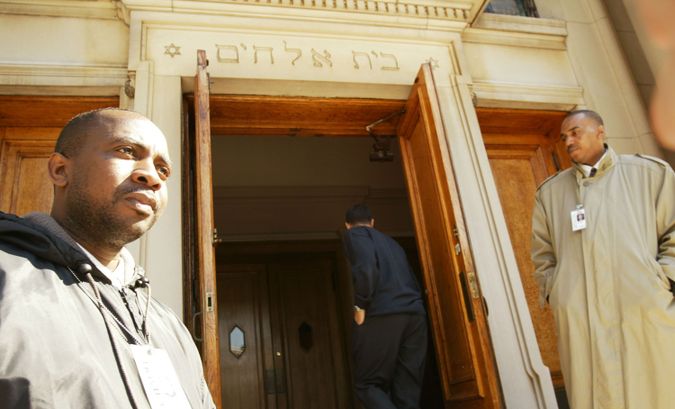 Security officers standing outside a Brooklyn synagogue in 2003 during the High Holidays, when some communities heightened security during the American invasion into Iraq. Image by Getty

This year, Jews are scared anew, with anti-Semitic hate crimes up around the country, Patrick Daly, deputy director of the Secure Community Network, a nonprofit organization that provides security consulting to Jewish communities, told the Forward earlier this year. In the 10 months since the Pittsburgh shooting on October 27, SCN got more than 1,500 incident reports, requests for security advice and other communications — about triple the number in the 10 months before.

Pittsburgh and Poway happened amid a nationwide increase in anti-Semitic incidents, primarily vandalism. The FBI reported 938 anti-Semitic hate crimes in 2017, up from 684 in 2016. In New York Ciry, the police recorded 152 hate crimes against Jews through the summer, up from 93 in the same period last year. Orthodox Jews in Brooklyn have suffered repeated violent assaults including one horrific attack just last week in Crown Heights that was captured on video.

And across the country, instances of anti-Semitic graffiti and property damage are on the rise: in 2017, the most recent year for which the FBI has released data, there were 938 anti-Jewish hate crimes, the most in any year since 2008. Three-fourths of the incidents were nonviolent.

In response to all this, synagogues are implementing a variety of new protocols. Those that can afford it have hired security guards — in some cases more than usual. Some without such resources have deputized congregants to carry their own weapons, according to Rabbi Yair Hoffman, an Orthodox educator who writes frequently about Jewish legal decisions.

Security needs have forced a confrontation with Jewish law for traditionally observant synagogues, While some are citing the Talmudic acceptance of swords as adornments, Rabbi Hoffman said that the threats American Jews face are not pervasive enough to even justify carrying cell phones in synagogue on Shabbat or holidays, something rabbis have frequently allowed in Israel.

But as in Talmudic times, not all rabbis agree. Rabbi Jeffrey Myers famously had his cell phone with him during the Tree of Life shooting, having been encouraged to do so during a security training; his call to 911 helped bring police officers to the synagogue a few minutes after the shooting started.

Other changes are less religiously fraught.

Some synagogues have decided to only use a single entrance and exit, and others are denying entry to people who didn’t buy tickets. At various points throughout the year, synagogues have discussed allowing members with gun licenses to bring their weapons into the building. Jonathan Burstyn, a nursing home administrator and marksman, trains a group of congregants at his Orthodox synagogue on Chicago’s North Side who bring their handguns on the Sabbath; the identity of the armed congregants is not known to the rest of the community. (Security experts have told the Forward that only congregants that have been authorized by their synagogues, and have gone through extensive special training, should bring their weapons to synagogue.)

To pay for the new security measures, synagogues across the country have foregone improvements to their buildings and added extra charges to membership fees in order to increase their security budget, Daly said. SCN encouraged synagogues and Jewish community centers to apply for $100,000 security grants from the Federal Emergency Management Agency. Synagogues “are significant recipients of the awards,” according to an official with the Jewish Federations of North America who asked not to be named because he was not authorized to speak on the record. FEMA does not publish a list of grant recipients or track religious affiliation, the agency said.

“People really appreciate the increase, whether that be with local police at the perimeter, or it might be a security guard at the door,” said Jacobs, the leader of the Reform movement. “It gives people a feeling of more safety coming into the building.”

One Conservative synagogue in Virginia installed cameras, a fence and new windows and doors instead of hiring armed guards, said the president of the synagogue, who asked that both her name and that of her congregation be withheld to keep its new measures a secret.

Congregants are largely accepting of added security fees, as well, said Jacobs and other synagogue leaders.

When Baltimore’s Beth Tfiloh Congregation, which calls itself the largest Modern Orthodox congregation in the country, added the fees to its membership dues, “very few people complained,” the synagogue’s leader, Rabbi Mitchell Wohlberg, told the Forward.

Yet despite many people’s comfort with more security, clergy and congregants also worry that the new measures could overshadow the Jewish virtue of hospitality. The North American Association of Synagogue Executives, the National Association for Temple Administration and the Anti-Defamation League have been holding webinars and conference calls to help synagogue leaders maintain strict security protocols while still making congregants and guests feel welcome. One such seminar in September addressed questions like, “What steps should you take now to ensure an environment that is both sacred and safe?”

Shir Tikvah Congregation, a Reform synagogue in Minneapolis, has tried to maintain a balancing act in its security planning. Their security committee includes people of color, queer people and a former police officer, in order to bring diverse perspectives to the problem, the synagogue’s rabbi, Michael Latz, said. In addition to having a police officer stationed in front of the synagogue during services, the synagogue also sought out security personnel who had undergone anti-bias training.

Many Jews of color feel conflicted about the increased security.

“It’s a double-edged sword,” said Yolanda Savage-Narva, the executive director of Operation Understanding D.C., a nonprofit in Washington, D.C. that promotes black-Jewish relationship-building. “I’m happy that we’re secure. But it does evoke an emotion that makes you fearful and very triggered by how law enforcement can negatively affect people of color and communities of color.”

At the same time, she said, “Jews of color understand that we have to keep the synagogue safe.”

Due 2 the fact that the community I currently live in is crappy & people r calling 4 Jews in USA 2 carry visibly threatening weapons, I decided 2 not go to shul at all 4 Rosh Hashanah & Yom Kippur. I don’t need extra stress 2 go 2 shul. I know Hashem will understand ??‍♀️

Mimi Premo, a black Jewish woman who lives in the Las Vegas area, acknowledged that racial profiling of Jews of color is a real problem. When she visits synagogues where she is not a member, she calls beforehand to let them know she’ll be attending services. She has been stopped and asked to identify herself when she has not called in advance. But she feels that security guards and police officers are a necessary precaution.

“Even as a woman of color, I don’t feel personally attacked by the idea of having law enforcement or security close by,” she said. “I believe that they are here to protect us and make sure we’re okay.”

But even if most American Jews either welcome or tolerate enhanced security, there is a sense of sadness at how necessary they are. For as long as Wohlberg has served Beth Tfiloh, High Holiday tickets have been a formality, because the policy has always been to let people in without them. The tickets usually stay in a congregant’s pocket, or in the bag in which they keep their prayer shawl.

This year, for the first time in four decades, Beth Tfiloh will be checking tickets at the door on Rosh Hashanah and Yom Kippur for the 2,000 people who have purchased them.

“It’s not that we’ve changed,” he added – it’s America that has.