Arming Synagogues Will Make Them Less Safe – For Black Jews. Stop Erasing Us. 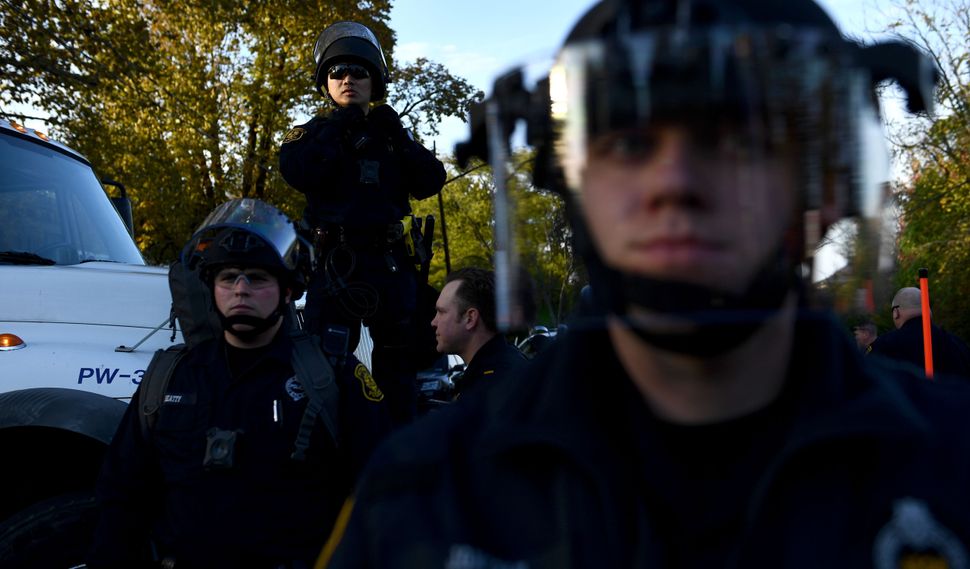 The Jewish community isn’t going to forget Saturday, October 27, 2018 anytime soon. A gunman, armed with an AR-15, burst through the doors of Pittsburgh’s Tree of Life synagogue. Shouting anti-Semitic slurs and exclaiming “All Jews must die,” he opened fire, killing 11 members of our community who had gathered to pray and celebrate Shabbat.

The brutal massacre has Jews wondering how to respond: What steps can we take to ensure that we can pray on the holiest day of the week without fearing loss of life?

One response popular among the American Jewish community is the increase of security at synagogues. The most popular proposal has been to have off-duty police officers or other armed security officials inside or outside the shul. In the wake of last week’s massacre, Brooklyn Borough President Eric Adams urged congregants to bring their firearms to religious services. New York State Assemblyman Dov Hilkind tweeted in support, “I am registering immediately for a gun license. And I encourage other Jews to do so to protect their institutions and synagogues. If we are targets, we need to be prepared.”

And of course, President Donald Trump told reporters on the day of the massacre, “If they had an armed guard inside, they might have been able to stop him immediately.”

This approach is absolutely wrong.

Instead of mindlessly contracting off-duty police officers to stand in the lobbies of our synagogues, we must focus our attention after Pittsburgh on eradicating the anti-Semitism and white supremacy that allowed this attack to happen.

When I was around ten years old, and my brother around six, my mother sat us down on the living room couch. Earlier that day, the family car had been pulled over on the highway. My father took his hands off the wheel, informed the officer of all his motions before he made them, and was eventually allowed to keep driving.

In that moment, however, my mother, a white Jewish woman, saw the loss of her entire family. She knew that for a Black man and two Black boys, that situation could have very well been disastrous.

So, not for the first time, and certainly not for the last, my mother sat us down and begged us to remember, her voice breaking with emotion, that when interacting with police officers, we were to be completely non-threatening, tell them all our movements ahead of time, and focus on getting home alive.

My story isn’t a unique one at all. Every Black person I know has some story where they were taught, or they realized the very intense danger a police officer posed to their lives. And this danger isn’t imagined, either.

Last June, a white police officer in Georgia who’d been hired despite admitting to domestic abuse, illegal drug abuse, and arrest for “reckless, eluding, speeding,” according to his handwritten file, was charged with voluntary manslaughter for shooting dead a man who drove away from him at a traffic stop.

Also in June 2018, a Portland State University police officer shot and killed a 45-year-old Black navy veteran who was breaking up a fight. The man killed, Jason Washington, had a registered and legal concealed carry permit on him. The officers faced no criminal charges.

These are just two examples of all too many. African Americans, who represent just 13% of America’s population, make up fully 31% of the people killed by police.

The fear I feel, and that Black people all around the nation feel, when we encounter a police officer, is not unfounded in the slightest. I’m terrified for my life because far too many people who look like me have lost theirs in seemingly innocuous interactions with law enforcement.

And yet, time and again, the communities we live in ignore this well-founded fear and resort to law enforcement in order to “protect” those in our vicinity.

Like American Jewish synagogues, my university, Johns Hopkins, made this same mistake last years, during the Spring 2018 semester. Hopkins students, faculty, and parents received an email from university president Ronald J. Daniels in early March. This email cited “the challenges of urban crime here in Baltimore and the threat of active shooters in educational and health care settings” as justification for the introduction of bills in both chambers of the Maryland state legislature that would allow Hopkins to create an independent police force.

Almost instantly, students from dozens of different groups stood against this measure united and participated in a number of powerful actions to affirm that a private university police force was not something we wanted, needed, or would feel protected by.

The student coalition fought this bill through a number of tactics, both on campus, in surrounding neighborhoods, and at the state capitol. Because of the hard work and organizing effort we all put in, the bill was pulled from the state legislature at the end of the month.

And yet, Johns Hopkins has begun placing armed, off-duty Baltimore police officers around campus. Their cars idle next to the entrances to campus, and they stand wordlessly in coffee shops and buildings and dorms.

There are few things more terrifying to me than seeing a man with a gun standing inside the library’s cafe as I’m trying desperately to get my latte before my 9AM sociology class.

When I walk, exhausted, into my dormitory building at midnight, my hand tightens around my university ID in my pocket, just in case instantly proving I belong is key to avoiding harassment, arrest, or worse.

This is the same fear I felt when I saw a group of police cars idling outside of a synagogue I had been invited to for Rosh Hashannah this year.

In the wake of the Pittsburgh massacre, it’s only natural that the looks I get every time I walk into a synagogue, questioning my belonging, would turn to pointed questions. However, when these distrusting white Jews can turn to a person with a gun and tell them that I don’t belong, that becomes a threat to my personal safety in the scariest way.

My heart already clenches each time I walk into a shul because of fear of an anti-Semitic attack; I don’t need to also be terrified of the possibility of the police violence that’s become all too normal.

Instead of throwing guns at the problem, let’s work to eradicate the problems of antisemitism and white supremacy that allow these massacres to happen.

Arming Synagogues Will Make Them Less Safe – For Black Jews. Stop Erasing Us.