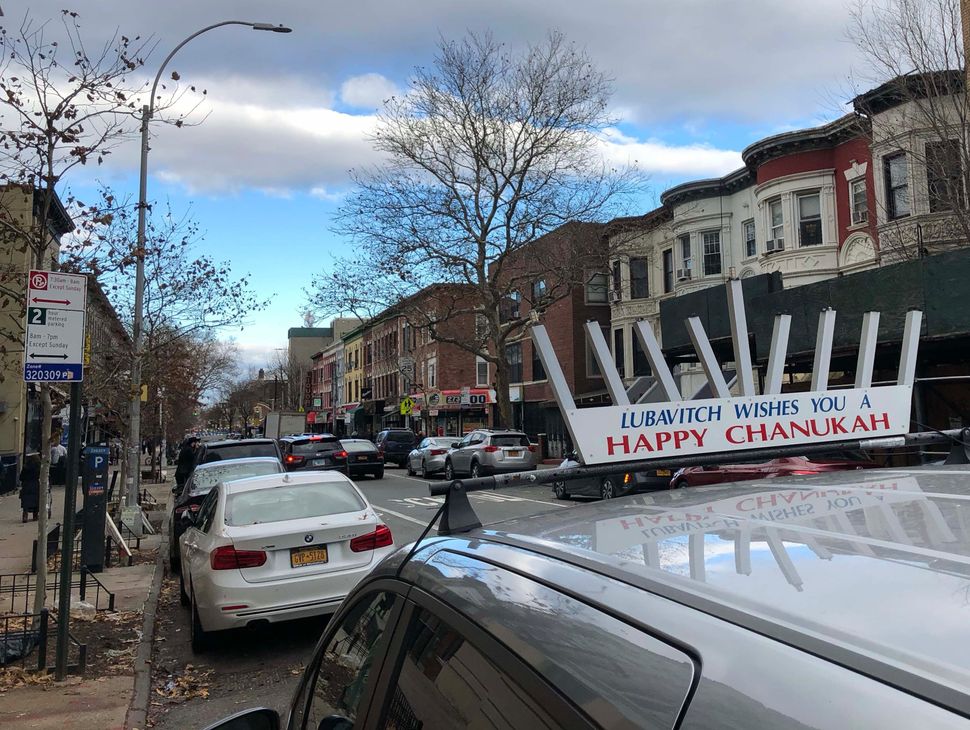 Mindel Zaetz’s husband was chased down the street last week by a group of men while he was on his way home from work, just off of Eastern Parkway, the broad thoroughfare that runs through the middle of Crown Heights, in Brooklyn.

“He came home really spooked,” said Zaetz, 29, as she was on her way home from midday shopping. “He said, ‘I’m not going out at night anymore.’ I said, ‘Finally.’”

Out of six attacks on Jews in Brooklyn in the last month and a half, three have occurred in Crown Heights. On Oct. 15, a teenager beat a Jewish man with a stick. On Nov. 19, a high school-age yeshiva student was “sucker-punched” by an assailant. On Saturday, a man was punched without provocation on his way to synagogue. The last incident came amid four attacks on Jewish people — two of them on children — that occurred on the same weekend.

The attacks have triggered fears in those communities that more violence is in the offing. In Crown Heights, many residents interviewed this week, like Zaetz, have a story about an attack or a near miss that didn’t get reported to the police. Jews are being targeted, say residents of these communities, by members of non-white ethnic groups who see Jews as symbols of gentrification in their neighborhoods.

“It’s less of an anti-Semitic thing than they needed a target to respond to this word: gentrification,” said Mendel Turner, 28, a salesman at the Borsalino hat store on Kingston Avenue.

The New York Police Department declined to respond to emailed questions from the Forward, and declined to make any representatives available to answer questions.

The incidents come amid reports about a 37% national rise in anti-Semitic incidents in 2017, according to FBI statistics. Yet the Jewish residents of Crown Heights say what’s happening in their neighborhoods is unrelated to the white nationalism that seems to have fueled numerous incidents of Nazi-inflected vandalism nationally. Indeed, no one who was arrested for perpetrating an anti-Semitic hate crime in New York City in the 22 months leading up to October has been associated with a far right group.

The attacks in Crown Heights are “clearly anti-Semitic,” said the executive director of the Crown Heights Jewish Community Council, Rabbi Eli Cohen. But, he said, “if someone feels that white supremacists are feeling more empowered, how would that make a young minority kid hit a Jewish person?”

Crown Heights residents are particularly attuned to violence against Jews because of the neighborhood’s history of racial tension. That culminated in violent riots in 1991 after a car escorting the Lubavitcher Rebbe — the leader of the worldwide Chabad movement, headquartered in Crown Heights — hit two small children, killing one. During the rioting, a Jewish man was stabbed to death by a black assailant.

“This is not the eighties over again,” Cohen said, but the attacks have left residents scared and looking for ways to limit their risk.

Zaetz said that she is having her elementary school-age son take the bus to school — a three-block journey he used to do by foot. When explaining her decision, Zaetz said she used the early evening winter darkness as an excuse, lest she scare him.

“I don’t feel threatened when I walked down the streets, but I know this area has changed,” said Shani, 36, who declined to give her last name. Public school children frequently yell “Heil Hitler!” into the front gate of her kids’ school, she said.

Deeply concerned with increase in violent incidents against Jews in NY. Most recently, last night a chasidic Jew was knocked to the ground in Williamsburg , and a Jew was beaten in Crown Heights 6am this morning. A parent asked me today if it is safe for her kids to walk alone! pic.twitter.com/3WTpea6W1G

Crown Heights residents say that the attacks here are caused by local issues, and need local solutions. They say that rapid gentrification, less intensive policing and other pressures are combining to stoke animosity between Jewish and other minority communities.

Jews are pegged as the representatives of gentrification because, in many poor Brooklyn neighborhoods, they are, says Avi Leshes, a director of economic development at the Brooklyn Chamber of Commerce. He pointed to hotly contested development project like one in the Broadway Triangle, in East Williamsburg, from a Hasidic-owned company.

And while the attacks are targeting Jews, it may be because black people identify Judaism as “a form of almost hyper-whiteness,” according to Mark Winston Griffith, executive director of the Black Movement Center, a not-for-profit group that promotes communal organizing in the black community in Crown Heights.

In that regard, Griffith said, the attacks may Be an extension of animosity toward white people in general, who drive gentrification in Brooklyn. He added that the attacks are not on the radar of people involved in social justice initiatives in Crown Heights.

“To the extent that people hear about it, they are probably thinking about it in the national context of anti-Semitic acts, and the larger landscape of hatred that is being painted by Donald Trump,” he said.

In Crown Heights, however, the Orthodox residents — mostly members of the Chabad-Lubavitch movement — have been living in the neighborhood for decades. Indeed, in the late 1960s, the Lubavitcher rebbe spoke out against large numbers of white New Yorkers moving to the suburbs. He called the phenomenon a plague and said those who stayed in the neighborhood would be blessed. His flock remained.

Leshes, Cohen and others also say that police are not as present in the neighborhood as they once were, leading to a culture of permissiveness for would-be assailants.

“We’re seeing that the police department has taken a new approach to policing that is much more hands-off,” Cohen said. “I hear from the cops that they feel that there is a little bit of a sense of lawlessness.”

On Monday, 13 members of Congress from the New York City area released a letter urging the NYPD to do more to combat anti-Semitism and increase crime reporting rates, such as publishing the city’s hate crime statistics in Yiddish. The letter also asked the NYPD to disclose how often its hate crime unit meets with local community leaders, and how much the department spends.

However, Jewish community leaders like Cohen are cautious about “explaining away” the anti-Semitic nature of the attacks, worrying that it could detract from the severity of the crime.

“There’s never an excuse for anti-Semitism,” said Yaacov Behrman, a local activist who directs a community drug use prevention program. “But there’s a reason it’s growing.”

What some non-Jewish residents miss is that the issues the assailants may be responding to are things the Jewish community is struggling to deal with as well.

Imani Keith Henry, the executive director of Equality For Flatbush, a not-for-profit that organizes tenants in Brooklyn, said that while many notorious landlords in Crown Heights are Jewish, it’s important to remember that gentrification also impacts poor Jews.

Turner, the hat salesman, said that his parents are finding it increasingly difficult to pay the rent on their apartment, which is not rent-controlled or -stabilized.

“We’re thinking, okay, how are we gonna live here?” he said. “I don’t think people realize that we all have the same concern.”

To stop the attacks, community leaders say they are hoping to see more police patrols. Many of them were meeting Tuesday with the commanding officer of the precinct that covers the southern portion of Crown Heights, said the head of governmental affairs for the Crown Heights Community Jewish Council, Chanina Sperlin.

“I always tell them, they have to put a police officer on every corner,” Sperlin said. “You have to make sure the residents are safe.”

Cohen said that he also wants to know if there is some central source of motivation for these attacks.

“One of the things we need to do is find out if there’s a conversation that we don’t know about, either online or in person, that is focusing on Jews,” he said.

But all are hoping that residents and observers avoid over-simplifying the attacks — and prevent the neighborhood from devolving into the kind of inter-communal enmity that characterized the atmosphere in the early 1990s.

“It comes from a deeper place than: black, Jew,” Turner said.