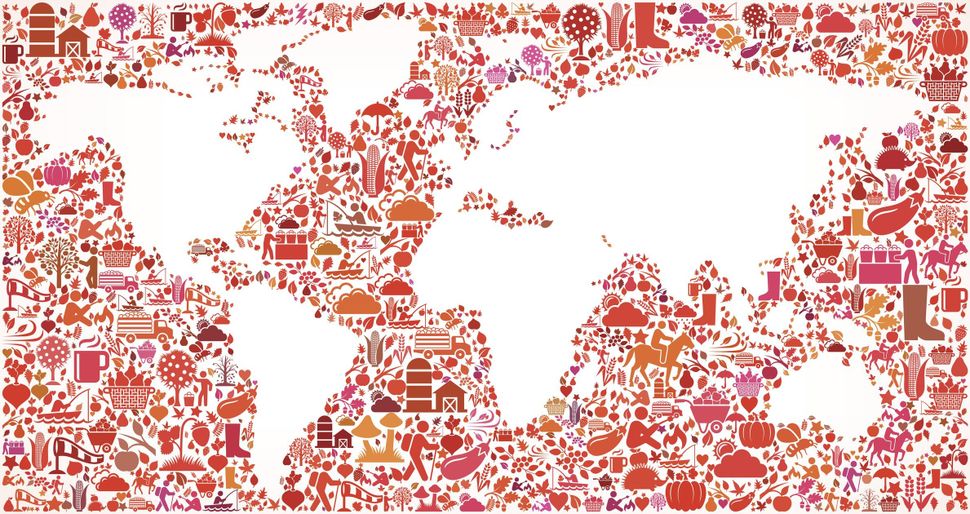 This is the story of how a game taught a young, Black Jewish girl that she didn’t belong. The game is Jewish Geography. The young girl is me.

Urban Dictionary defines the diasporic pastime of “Jewish Geography” as what happens when “two or more Jews get together and discuss who knows whose Jewish friends and relatives from where.”

The game is a staple of small talk in Jewish circles across North America, and even more so in Canada where I live, since the Jewish community is heavily concentrated in Montreal and Toronto.

But what are we as Jews achieving with this seemingly harmless small talk? What are our intentions? Hometown, last name, parents’ names, maiden names, high school… the questions go on and on until you can be marked and accounted for.

For the truth is, the game of Jewish Geography is not just a who’s who. At its root it’s a test to determine the legitimacy of one’s Jewishness. The game masquerades as a kind of small talk, when it’s actually a mechanism for keeping the Jewish community insulated and exclusive.

In Jewish Geography, Jewishness is proved by the consistent and traceable socio-economic status, pure bloodlines, and proper mingling with the other Jewish families in the area. Succeed, and you’re in; fall short, and you’ll be what I call asterisk Judaism or Jewish*.

Being Jewish* means you know you’re Jewish, but you’re constantly questioned, quizzed, and challenged. It means you always lose at Jewish Geography.

I’m Jewish* thanks to prejudices held about my Blackness, my mother’s Blackness, and her conversion, and Jewish* I will always remain, no matter what I do.

I have come to understand that I exist in the sweet center of overlapping prejudices held in every typical diasporic Ashkenazi community I’ve encountered: anti-Black, anti-conversion, anti-intermarriage.

But it took me a long time to figure this out. There was a lot of denial, a lot of tears, and a lot of losing at Jewish Geography.

I grew up in a middle-sized city in Ontario, Canada with a highly concentrated Jewish community spread between about 15 synagogues. My family started out involved in community life. My parents (my Mother specifically) made a concerted effort to bounce around Conservative, Reform, and Reconstructionist synagogues, trying to find a good fit for our family of five.

But it was tough. A naming ceremony here, a High Holiday service there, and a handful of years at a Sunday Hebrew school (a goldmine of stories, for another time) later and we found ourselves sans synagogue, but invited to celebrate the “big four” (Rosh Hashana, Yom Kippur, Chanukah, and Pesach) with family friends close in age to my sisters and I.

I persevered. I worked at the Jewish Community Center as a camp counsellor, lifeguard, and administrative assistant (jokingly referring to my reign of six years as ‘Princess of the JCC’), in addition to volunteering at the Jewish retirement home right across the parking lot.

These late teenage years to early adulthood marked a significant departure from my family’s approach, which didn’t really embrace the Jewish community. I used to resent my parents for having retreated from the small community in the city, wrongfully blaming their choices as the cause of my insecurities in the community.

Some years of serious maturing, a greater awareness of anti-Blackness, and a change of city has reframed my understanding of their choices. I realized that they weren’t trying to deny me Jewish community, but rather protect me from one that would reject me.

It took me a while to understand this. As a teenager, I found myself surround by a cluster of people whose families had grown up around each other, sometimes for two or three generations. They had attended the same private schools, synagogues, and summer camps, creating an impenetrable fortress of community against which I stubbornly rammed by head for five years, desperate to be accepted.

But of course, I wouldn’t be. Because when it comes to Jewish Geography, Jews like me will always lose.

This, my friends, is how you lose at Jewish Geography: Have a plain as day British last name, tawny skin, curly hair and bright blue/green eyes, a white Ashkenazi Dad, a Black Mom who converted to Conservative Judaism prior to her marriage to my Dad, be a Sunday Hebrew school drop-out due to microaggressions targeted at the aforementioned descriptors, plus have no long-standing family synagogue membership (see microaggressions), no Bat Mitzvah (see Hebrew School drop-out), and no Jewish sleep-away camps.

This means you will lose, despite 20+ hours a week at the Jewish Community Center, regular appearances at a friend’s synagogue, two summer trips to Israel, and a summer working at a Jewish sleep-away summer camp.

Despite all this, playing Jewish Geography, I will always be subjected to quizzical looks and a judgmental “Oh, I see.”

People are thrown, starting with the last name, Blakey. An old-timey English name coincidently links me to a list of dead British men with whom I share nothing but a long history of mispronunciation and misspelling.

How interesting that the choice made for survival by my great-Grandfather amidst rampant anti-Semitism in pre-Shoah Europe would come to mark me as an outsider from community.

“It was changed from Blaschkey!” I used to blurt out, trying to buy myself back in.

For some, that would suffice. For others, the next question would be about my appearance.

“I would have sworn you were Sephardic!”

“Someone told me you were Israeli — you’re not?”

And it went beyond questioning. A university campus Chabad Rabbi retracted his invitation for me to participate in a belated Bat Mitzvah ceremony upon finding out that I indeed was not Sephardic (his assumption), and that my mother had converted and not through an Orthodox Rabbi. He rather offered instead to prepare me for my own conversion, to “avoid passing on this ‘problem’ to my future husband and children.”

Then there was the time I was rejected without having even completed the application form to a summer program in Jerusalem sans explanation, but leaving me to believe it was based on my mother’s (apparently sub-standard) conversion.

Blackness marks me as outsider. Anti-Blackness finds me. My racial ambiguity does nothing but bring more questions and doubts. During my years of peak insecurity, I would hide and seek comfort in my ambiguity and pass as Sephardic (fueled by a rosy experience in Israel during my two summers there, when I remained ignorant of the rampant anti-Blackness but highly aware of the representation of Sephardic women in ads).

The sting of these and other rejections hurt all the more seeing other twenty-something Jews floating with ease through Jewish spaces with zero effort.

I became jaded and judgemental, bitter and resentful at the relentless effort I’d made for acceptance as opposed to others’ half-assed Judaism. They had community because they checked all the boxes that I didn’t: Jewish private school, sleep away camps, bar/bat mitzvahs, synagogue memberships that were barely put to use.

They were white. They made sense.

They were winning Jewish Geography without even trying.

This exclusivity creates a cycle of ostracization for families like mine, and it took years for me to realize this. The problem isn’t with me; it’s with the game itself.

The effects of seemingly harmless Jewish Geography are part of a much broader problem of prejudices held in Jewish spaces. Ask the average moderate Ashkenazi upper-middle class individual if they hold any of these prejudices and chances are you will be met with a rapid and defensive “No, of course not!”

But what exactly is being said, or rather implied, when community is conditionally given to those who check the same boxes as you?

My ask for 5779 is for white-majority Jewish communities to reflect upon what they see as key markers for someone’s Judaism. I ask you to really sit with any feelings of discomfort, anger, and defensiveness. Ride the waves and take the time of Yom Kippur to truly reflect on implicit or explicit exclusion in the community. Because trust me, it’s there.

Stop forcing people like me to identify as Jewish*. Let’s make 5779 the year all Jews can be just Jewish.

Alysha Ruth (she/her) is a Jamaican Jew on Treaty 6 territory focused on making space for Black Jews and decolonial intersectionality within the community. Follow her on twitter @lyyyyysh.