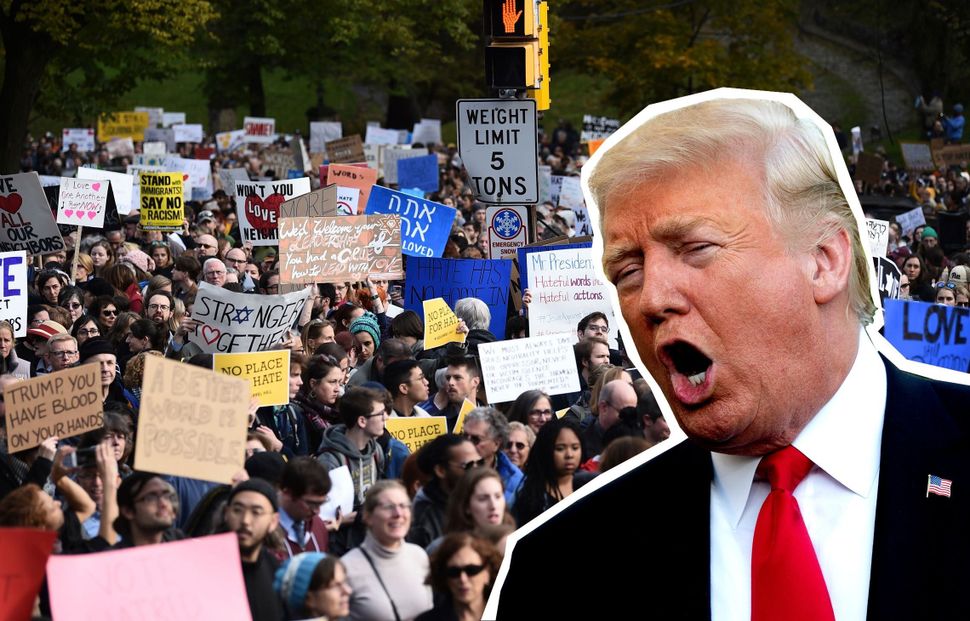 A powerful split-screen image greeted those following President Trump’s visit to Pittsburgh yesterday in the wake of a horrific massacre that left 11 Jews dead. As the President’s SUV pulled up to the Tree of Life synagogue where the massacre took place, thousands marched through the neighborhood, chanting Jewish prayers about love and kindness and holding a huge sign that read, “President Trump: You are not welcome in Pittsburgh until you cease your assault on immigrants and refugees.”

By this morning, Trump had already tweeted to complain about the coverage.

Melania and I were treated very nicely yesterday in Pittsburgh. The Office of the President was shown great respect on a very sad & solemn day. We were treated so warmly. Small protest was not seen by us, staged far away. The Fake News stories were just the opposite-Disgraceful! pic.twitter.com/9B9HgCF1G9

But what he was greeted with on the streets of Squirrel Hill was a vision of American Jewry in a nutshell. 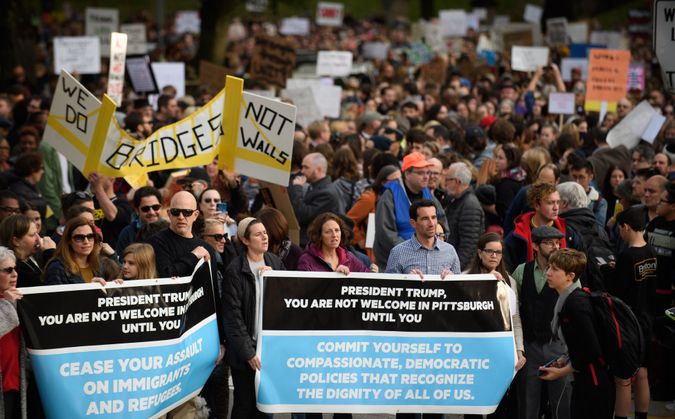 It’s a fact that’s been obscured because Trump has ingratiated himself with Israel, which is after all the Jewish State, with a series of moves that many – Israel included – consider to be in Israel’s best interest. He moved the embassy to Jerusalem from Tel Aviv, recognizing Jerusalem as Israel’s capital rather than a bi-national city whose status would be decided in a future peace negotiation. He scuttled the Iran deal, the bane of Israeli President Benjamin Netanyahu’s existence. Trump also withdrew all aid to the Palestinians until such time as they stop identifying as refugees.

As a result, Israelis love Trump more than any other nation, a recent survey found.

Many extrapolate from this that he must be popular among American Jews, over 90% of who consider themselves pro-Israel. And indeed, Trump is very popular with the Orthodox, for whom Israel is a big if not the biggest priority when it comes to voting.

American Jews by and large are liberals — pro-immigrant, pro-LGBTQ, pro-choice. It’s the twisted reason that Robert Bowers gave for murdering them. As Alex Kane movingly put it, Bowers and his white supremacist brethren are actually right about one thing: “Most American Jews stand in support of American Muslims, opposed the Trump administration’s cruel Muslim travel ban, and welcome in refugees from Muslim-majority countries.”

Despite the extreme distaste the majority of American Jews have for their president, non-Jewish Americans would be forgiven for missing it. Trump surrounds himself with sycophantic Jews anxious to do his every bidding, including his own son-in-law Jared Kushner, and Stephen Miller, the architect of the disastrous family separation policy, to say nothing of Netanyahu, whose fawning over Trump is by now legendary.

Trump arrived to a stark shunning. He stepped off the plane in Pittsburgh to be greeted by no one. This despite Jared Kushner working behind the scenes “phoning Trump allies and encouraging them to support the president,” according to The New York Times. Over 82,000 people signed a letter by Bend the Arc telling Trump in no uncertain terms, “President Trump, your words, your policies, and your Party have emboldened a growing white nationalist movement. The violence against Jews in Pittsburgh is the direct culmination of your influence” – a rallying cry that helped mobilize the protestors.

Those protesting Trump in Pittsburgh included Orthodox Jews, whose words of consolation and comfort have been genuine and manifold. It also included Republicans. One Republican who lives in the Squirrel Hill neighborhood told the Times he was furious that Trump had not “distanced himself enough from views espoused by white nationalists.” “You never saw any leader speak this way and the country become so polarized,” he said.

Even family members of the slain declined to meet the president when they met with the F.B.I. “We said absolutely not, not after blaming people for what occurred,” Steven Halle, the nephew of Daniel Stein who was killed at the Tree of Life Synagogue, told The New York Times. “It was just a worthless thing to say. The man doesn’t think before he opens his mouth.”

Instead, when he arrived in Pittsburgh, the President was met with many protesting American Jews — and with Israel’s Ambassador to the U.S. Ron Dermer.

The rabbi of Tree of Life, Jeffrey Myers, also met with Trump, though he revealed that he had been inundated with angry messages from his community for inviting the President.

It makes sense. American Jews have never been as alienated from Israel as they are now. Thanks to Israel’s refusal to recognize liberal Jews, and its treatment of the Palestinians it holds under occupation, American Jews are increasingly critical of Israel, especially of leaders like Netanyahu, or the settler leader Naftali Bennett, whose proposal for resolving the Israeli-Palestinian conflict involves depriving the Palestinians of civil rights in perpetuity.

And yet, it was Naftali Bennett who Israel sent to console American Jews in the wake of their biggest tragedy to date.

One can see just how out of touch Dermer and Bennett are from the American Jewish community by what they have said. Like Trump himself, their words of “consolation” have involved chiding American Jews, many of whom have placed the blame at Trump’s doorstep.

On MSNBC, after being played a clip of Trump saying that there were both sides to the neo-Nazis marching in Charlottesville, Dermer was asked if he didn’t see that as a dog-whistle to white nationalists. Dermer chose to repeat the President’s exact language — though it has been widely derided as a defense of white nationalists.

“I see a lot of bad people on both sides who attack Jews,” he said (later, when pressed, Dermer allowed that he “didn’t think the President’s comment after Charlottesville were very good”).

Not to be outdone, following his visit Bennett tweeted a long thread criticizing those who would blame Trump for Pittsburgh, which included anecdotes about how wonderful Trump has been to Israel.

Make no mistake: These messages are aimed at a liberal Jewish community that was just attacked for these very liberal values — for the very things that make Trump so reviled in their communities.

The Israeli response to Pittsburgh has not only revealed the crater separating American Jews from Israel. It’s actually deepened it.

But Pittsburgh has revealed that Trump has no idea who the American Jewish community is. Well, he didn’t until yesterday.

America and its President just got their first visualization of who the majority of American Jews are. They spoke loud and clear: “President Trump: You are not welcome in Pittsburgh.” Because, as they sang, “Olam Chessed Yibaneh.”

The world is built out of love.

Correction: This article has been updated to reflect that in the interview in which Ron Dermer repeated President Trump’s assertion that there are “bad people on both sides,” Dermer, when pressed, later allowed that he “didn’t think the President’s comment after Charlottesville were very good.”