Wake Up, American Jews: Donald Trump Is A Huge Threat 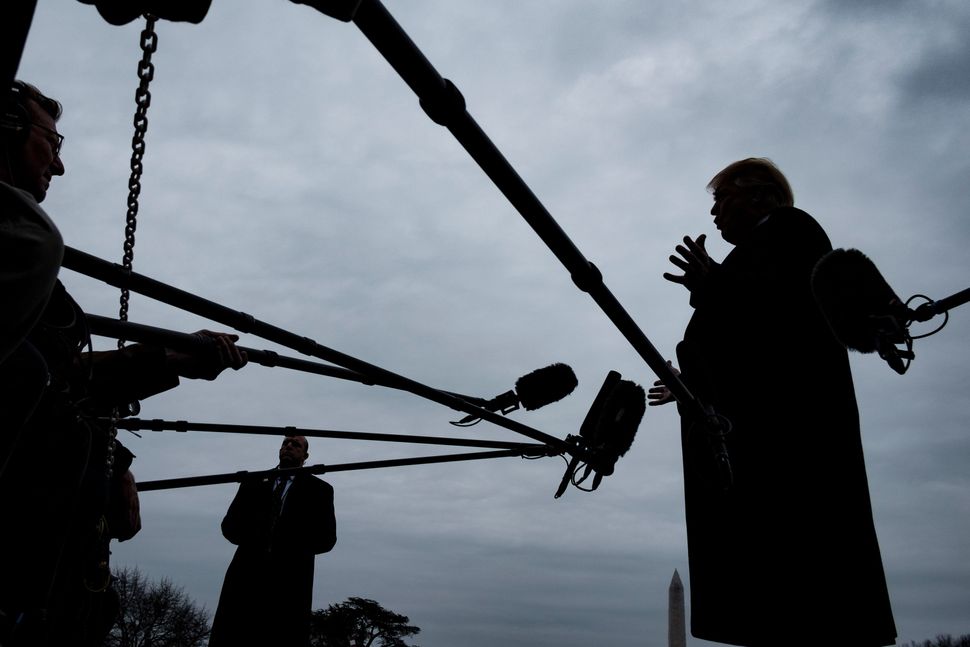 As a French Jew, I am often asked about anti-Semitism in France. Without fail, the last question at any appearance I make is the same: Should French Jews leave and move to Israel or America? I always insist that Jews have played an instrumental role in founding modern-day France, and if anyone is going to leave, it should be the anti-Semites.

But implied in the question is the belief that America, like Israel, is a safe haven for Jews. And I am not sure this is still the case. The opposite, in fact; in recent years, I have witnessed the oldest hatred in the world brewing in the United States.

I wish to warn my Jewish American brothers and sisters of the danger I perceive from the vantage point of a French Jew all too familiar with anti-Semitism. I wish to warn them that they are under siege.

Anti-Semitism in the U.S. is proliferating in a number of ways. The tradition of Holocaust denial is alive and well. The BDS campaign is gaining traction on campuses across the country. The left has embraced a form of identity politics that excludes Jews.

Then there’s the President himself.

I do not believe, as many Americans do, that the President was responsible for the massacre of 11 Jews in the Tree of Life Synagogue in Pittsburgh. But from the moment he began rallying hordes of far-right extremists, I have found myself with a singular thought: Jews, be wary of Trump.

Since his arrival on the scene, Trump has championed the legacy of Charles Lindbergh, the first architect of “America First” and a known anti-Semite.

But this was only the first in what has become a long list of signs signifying how bad the President of the United States is for the Jews. Think of the tweets and retweets during the presidential campaign, where every strain of lunacy seemed woven together to form a single story of hate and criminality. Think of the bile brewing on social media as so many souls called for the re-opening of gas chambers and “ovens” for the Jews of New York and Los Angeles.

Or think of the President’s consistent refusal to call out anti-Semitism. Think of the strange set of circumstances that resulted in the President’s remarks on Holocaust Remembrance Day, when he omitted the six million Jews exterminated by the Nazis. Think of his refusal to condemn the marchers in Charlottesville, Virginia who chanted, “Jews will not replace us;” instead, President Trump called them “fine people.”

Then there was the time he told the Republican Jewish Coalition, “I know why you’re not going to support me! It’s because I don’t want your money!”

We are often told of Trump’s love of Israel. But Israel should tread carefully with this President.

How reckless and hazardous to the Jewish state was President Trump’s recent move announcing the withdrawal of troops from Syria? The brewing destabilization of the region aside, from an Israeli prism, betraying the Kurds is disastrous. Iraqi Kurdistan is one of the very rare areas of the Middle East where Jews and Judaism are viewed positively. I don’t know another Muslim country where the memory and birthplace of a future Israeli Defense Minister are held in such high regard and with pride, nor where Yom HaShoah is celebrated with devotion and respect each year.

And following the 2017 referendum and the Battle of Kirkuk, Trump served Kurdistan to Iran on a silver platter, with no regard for Israel or its security.

As for the much hailed historic move of the U.S. Embassy to Jerusalem, this decision was a campaign promise made to Sheldon Adelson, as the New York Times reported, in exchange for $25 million. No doubt, the President was also thinking of the Christian right and their neo-evangelical, anti-European form of Zionism that sees in Jews bit players in a spectacle of the End of Times. In this religious fantasy, the Jewish people’s wholesale return to the Holy Land is considered a prelude to their conversion. (In this context, it’s not surprising in the least that the two pastors invited to bless the new Embassy were two declared anti-Semites: John Hagee and Robert Jeffress.)

It’s hard to believe that moving the Embassy came from a love of the Jewish people, especially in light of President Trump’s limited responses to the unprecedented spike in anti-Semitic attacks.

The President of the United States cannot pretend not to know that words have memory; they are like reactors that emit radiation. And the radiation given off by the words “America First” are on the Nazi spectrum.

It’s simply too dangerous, and can only result in a lightning storm of hate.

That tornado came last October on a Sabbath morning in the form of the hundreds of bullets that pierced the bodies of 11 holy Jews who had gathered to pray. America, as a shelter for the Jews, was suddenly swept to the dust. For the dissolution of this long-standing bond, Trump bears a portion of responsibility.

Bernard-Henri Levy will be speaking about this subject at the 92Y with Simon Schama.

Bernard-Henri Lévy is a philosopher, activist, filmmaker and author of more than thirty books including the forthcoming “The Empire and the Five Kings,” and “The Genius of Judaism,” Lévy is co-founder of the antiracist group SOS Racisme and has served on diplomatic missions for the French government.

Wake Up, American Jews: Donald Trump Is A Huge Threat