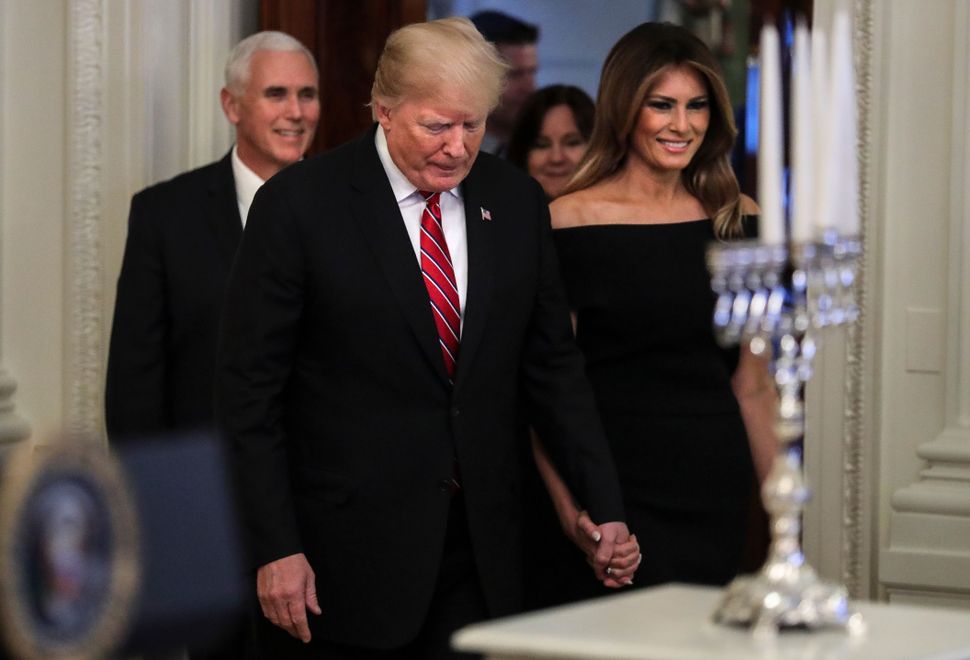 President Trump’s two Hannukah addresses at the annual White House Hannukah Party included a number of moving tributes, one to a group of Holocaust survivors and a second to the Jews he calls family – Ivanka and Jared Kushner.

He also issued a shocking insinuation that America was not the home of its Jewish citizens. The audience of pro-Trump Jews was so enamored of their host that they seemed not to notice, but when Trump introduced Vice President Mike Pence, he did so by way of Pence’s support for the Jewish State, or “your country” as he called it.

The President’s remarks are deeply offensive. They take the classic anti-Semitic canard that Jews have dual loyalties to their home country and to Israel and go one step further, suggesting that Jews have only one loyalty — to Israel.

Not only that, but the President contrasted the singular loyalty of American Jews to Israel with the love shown by Vice President Pence, who is able to love both America and Israel.

Amazingly, his audience of right wing Jews applauded. Their applause for the President’s casual anti-Semitic remark is staggering, not least because some in the audience had called Linda Sarsour an anti-Semite for saying something similar just weeks ago.

Sarsour also deployed the dual loyalties canard when she noted that attacks against some in her camp were “not only coming from the right-wing but some folks who masquerade as progressives but always choose their allegiance to Israel over their commitment to democracy and free speech.”

For this she was denounced as an anti-Semite. And yet, when the President of the United States said something much worse, the same people applauded him.

What could possibly explain this double standard? Ironically, it’s Israel. Trump’s efforts to please his patron Sheldon Adelson have resulted in measures that have greatly pleased the right wing Jewish camp, efforts like moving the U.S. embassy to Jerusalem and exiting from the Iran Deal, both hyped by Trump in his speech.

And in their rush to thank him for these actions, Trump’s Jewish supporters have not only condoned anti-Semitism in their ranks; they have stooped to literally applauding it.

Meanwhile, anyone who opposes Israel or any of its policies is immediately denounced as an anti-Semite, even if they have made great efforts on behalf of the American Jewish community.

Trump’s remarks are not surprising. It’s clear by now that he has replaced American Jews with Israel. When asked by a reporter after the Pittsburgh massacre what he intends to do about rising anti-Semitism, he boasted about how much he’s done for Israel.

Asked about the rise in antisemitic incidents and other hate crimes, and asked why he thinks it’s happening, Trump says, “It’s very sad to see it. I hate to see it.” He touts Israeli PM Netanyahu’s praise of him, then boasts about how he moved the embassy to Jerusalem.

Not only is it deeply insulting to Jews, but it’s insulting to any American who believes, in line with our Constitution, that “all persons born or naturalized in the United States, and subject to the jurisdiction thereof, are citizens of the United States and the State wherein they reside.”

Trump’s view of American Jews betrays his narrow, ethno-nationalist view of the world. If you believe that at its core, a nation’s identity stems from that of its ethnic majority, you will view America as a white, Christian country, and you will view the Jewish State as the country of the Jews. In this, Trump joins Prime Minister Benjamin Netanyahu, Hungarian Prime Minister Viktor Orban, and President-elect of Brazil Jair Bolsonaro, all of whom put a premium on ethno-nationalism and have embraced measures that privilege the ethnic majorities of their nations over their minorities.

It is this worldview that underpins Trump’s remarks at his Hannukah party, however unconsciously. It’s a worldview that has always ended up hurting Jews, and one that is fundamentally at odds with the values America is built on: liberal democracy, minority rights, pride that we are a nation of immigrants.

But the tolerance for anti-Semitism if it benefits Israel is by now a firmly established trend. Netanyahu’s penchant for whitewashing Holocaust deniers in Eastern Europe is second only to the stamp of approval he’s put on the anti-Semitic campaigner Viktor Orban.

There’s an irony to the fact that the Jewish State is selling out Jewish history to bolster its bonafides with other ethno-nationalists, given how much Jews have suffered as a minority from ethno-nationalism throughout our history. It’s an irony that was rendered vividly in Trump’s Hannukah party speech, when he praised Pence for Pence’s love of Israel — by insinuating that that’s where Jews belong.

I don’t believe that Trump himself is an anti-Semite. The rest of his speech and the second one he made revealed how close he feels to the Jews in his life, and how proud he is of what he sees as his gifts to the Jewish people.

But when he went off script, his view of Jews as being of Israel rather than the U.S. was exposed, and with it, an ethno-nationalist view that is fundamentally at odds with America as the country that’s been most good to the Jews throughout our bloody history.

Let us have no tolerance for anti-Semitism on the left, and none from the President of the United States.

This is our home, Mr. President. Before your German and Scottish ancestors set foot in our immigrant country, the American Jewish community was already making America great. So we must insist, not only for our sake, but for the sake of all minorities in all countries across the world from Hungary to Brazil to the U.S. to Israel, that America is our home. And we intend to fight for it.