Several weeks ago, the Forward hosted a symposium about being Jewish in America in the wake of the Pittsburgh massacre. If I’m being honest, some of the responses annoyed me; we aren’t living in 1930s Europe, or 1900s Poland, or 1490s Spain. There is no need to keep bags packed waiting for a pogrom; we live in the most welcoming country for diaspora Jews in history.

To be sure, things here aren’t perfect, for Jews or anyone else. There have been a rash of violent assaults on visibly Jewish residents of Brooklyn for months, leading to serious injuries in plainly anti-Semitic attacks. We can never forget what happened in Pittsburgh one fall Shabbat morning; the scars of the worst attack on Jews in American history will never totally heal.

But America distinguishes itself because our government — regardless of political party — as well as our media and our neighbors are, by and large, enormously welcoming of those of us of the Jewish faith.

Are there exceptions? Of course. But how many countries in world history, or even currently, would hold a party like the one I attended last night at the White House? 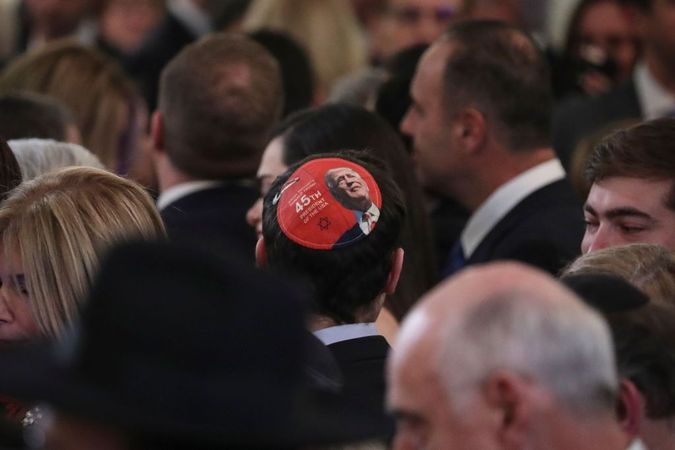 For the second year, President Donald Trump hosted a party for Jewish Americans at his home and place of work, the White House. I scored the invitation via a very kind friend, who asked, “Would you want to go to the White House Hanukkah reception?”

Never having been to the White House, I eagerly accepted, just as I would have done under President Obama, or President Clinton, or any other President. It doesn’t matter who lives there; a chance to experience the pomp and history of the White House is one every American should have in their lifetime.

Upon our arrival, after passing through several rounds of security, we were greeted by a small band playing in the foyer and a selection of kosher wines. My husband, far more strict than I am about such things, walked past the wine, assuming he couldn’t drink it. I asked an attendant, who assured us every single item served at the reception was kosher. There were several libraries to peruse (and peruse we did) before entering the buffet room and the general meeting room, where the President appeared and spoke to the gathered guests.

We didn’t actually make it into that main room; we didn’t leave the buffet area, and I may have eaten my weight in rack of lamb. We mingled with old friends, folks we’ve interacted with professionally for years but whom we’ve never met in person, and did a few double-takes when Jared Kushner walked by, or Sheldon Adelson passed on his scooter.

There were a lot of these bizarre moments; walking around the White House, seeing famous portraits of ex-Presidents and First Ladies, and then seeing a bright red TRUMP yarmeluka pass by. We also heard a somewhat decent speech from the President about Jews lost in Parkland and Pittsburgh, and then hearing chants of “TRUMP TRUMP TRUMP!” down the hallway and through the television monitor broadcasting the speech into the buffet room.

Even the cult of personality couldn’t dampen the feeling of being in the White House at Hanukkah, surrounded by beautiful Christmas trees and decorations. As we left, the Marine Chamber Orchestra played an entire songbook of Jewish music, from Hava Negila to Dreidel, Dreidel, Dreidel. It was an incredible moment that brought me to tears.

I stood and watched the band. I took a peek at their sheet music, and marveled about how blessed American Jews are.

For many of those present last night, our recent ancestors arrived with little in their pockets and no grasp of the English language. They lived in tenements on the Lower East Side, toiling in factories, hoping to give their children and grandchildren a better life.

And a better life is what they gave us — nothing short of the American Dream.

In 2018, hundreds of American Jews were invited into the White House and served kosher food and drink. They enjoyed the music of the official White House musicians playing Jewish music.

The President himself — far from an ideal man, of this we are all aware — proudly spoke of how “the Jewish faith is so deeply woven into the fabric” of his family.

This country isn’t perfect, for Jews or anyone else, but for a precious few minutes, looking at the sheet music and seeing those in attendance dancing, it felt remarkably close.