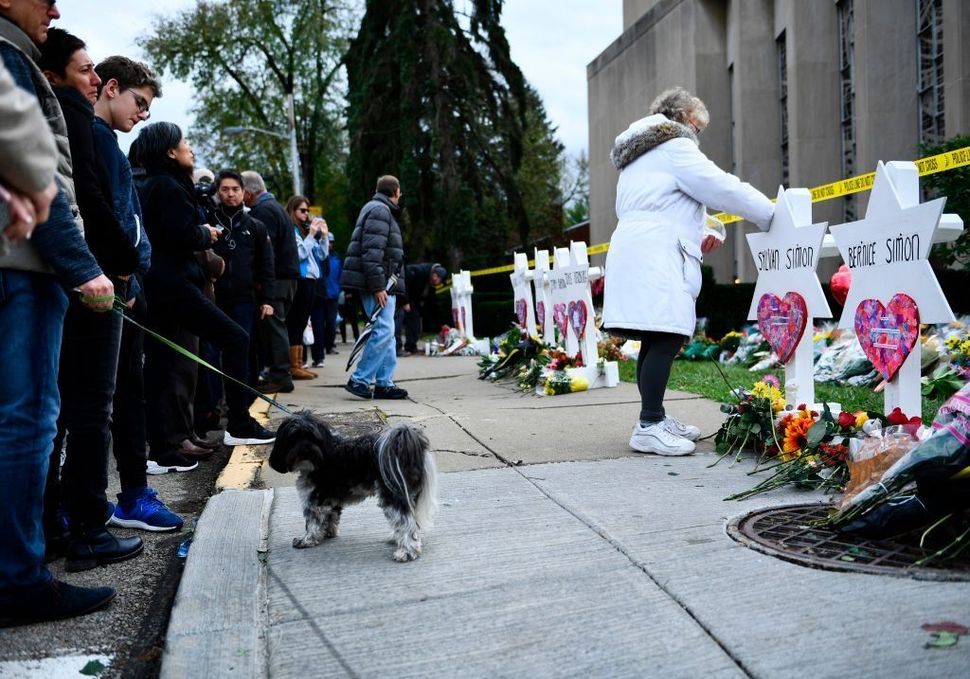 Americans mourning after the shooting at a synagogue in Pittsburgh. Image by Getty Images

In last night’s State of the Union address, President Trump cited his accomplishments fighting anti-Semitism. He noted his rejection of the Iran nuclear accord and his move of the U.S. embassy to Jerusalem. He also brought two Holocaust survivors to the address, one of whom narrowly escaped the Pittsburgh massacre in the Tree of Life Synagogue.

Trump’s Jewish supporters cite these accomplishments to justify their support. When Trump says or tweets something that gets him in trouble with Jews, like his comments following the Unite the Right rally in Charlottesville, Virginia in which he called neo-Nazis “fine people.” His supporters say don’t listen to what he says; watch what he does.

And yet, Trump insists that I listen to his words. He constantly talks or tweets in ways that cannot be ignored; certainly, the people who hate Jews aren’t ignoring them, but are finding comfort and even encouragement in Trump.

And bringing a survivor of the slaughter at Tree of Life to the SOTU address does not make up for his complicity in rising anti-Semitism. It’s frankly an insult.

Trump did not pull the trigger of the AR-15 which killed eleven Jews while they prayed. Robert Bowers did.

But Trump politicized and demonized the poor, frightened people making their way from Central America to seek asylum in the United States, just as many of my ancestors did, and for the same reasons: to escape hatred and violence for a chance to succeed in a nation which holds itself out as a beacon of liberty to the poor and dispossessed.

Trump and his political advisors created the ads that stated that these wretched people were coming here to kill, rob, and sicken Americans. And he blamed George Soros for it, finding a convenient Jewish scapegoat.

Robert Bowers was listening. As he murdered defenseless Jews praying at synagogue, he screamed “Kill all the Jews.” Bowers was convinced that the Hebrew Immigrant Aid Society was bringing in immigrants to kill his people.

But Trump’s history of deploying anti-Semitic tropes goes back to his campaign. In 2016, Trump linked the problem of immigration from Latin America to a conspiracy of “globalists” who cared less about the welfare of Americans and more about control of the world’s power structures. In an ad that many viewed as anti-Semitic, three people were prominently portrayed as representatives of that elite power structure: Federal Reserve Chair Janet Yellen, Financier George Soros, and Lloyd Blankfein, current Chair of Goldman Sachs. All happened to be Jewish.

This conspiracy theory of Jewish control of the levers of power is a throwback to the Protocols of the Elders of Zion, an anti-Semitic mythology written down and disseminated by the Russian military as the Communists overthrew the Tzars in 1917.

No wonder there has been a spike in anti-Semitic activity in the past two years.

Any President who calls poor migrants from Central America or Muslims fleeing a murderous regime in Syria as security threats to scare the American people is no friend of Jews, whether in the diaspora or in Israel.

Trump may not be an anti-Semite. But he allows his political operatives to fan the flames of anti-Semitism. So it’s nothing short of insulting to have him stand before the nation and claim to be fighting anti-Semitism.

In the Pinkas Synagogue in Prague, a wall is engraved with the names of Moravian victims of the Holocaust. My great-great grandmother and my great grandmother immigrated to the United States in the late 1880s, leaving behind a number of immediate family members whose names are engraved on that wall.

My father told us about relatives from Hamburg visiting in 1935 that were urged by my grandfather and my great uncle to stay and sell what they could. They chose to return saying, “We have seen this before. It will pass.”

It passed and so did they — at Auschwitz-Birkenau.

We can’t normalize Trump’s hate. And we can’t accept his claims that he’s fighting anti-Semitism. He’s not. He’s fanning its flames.