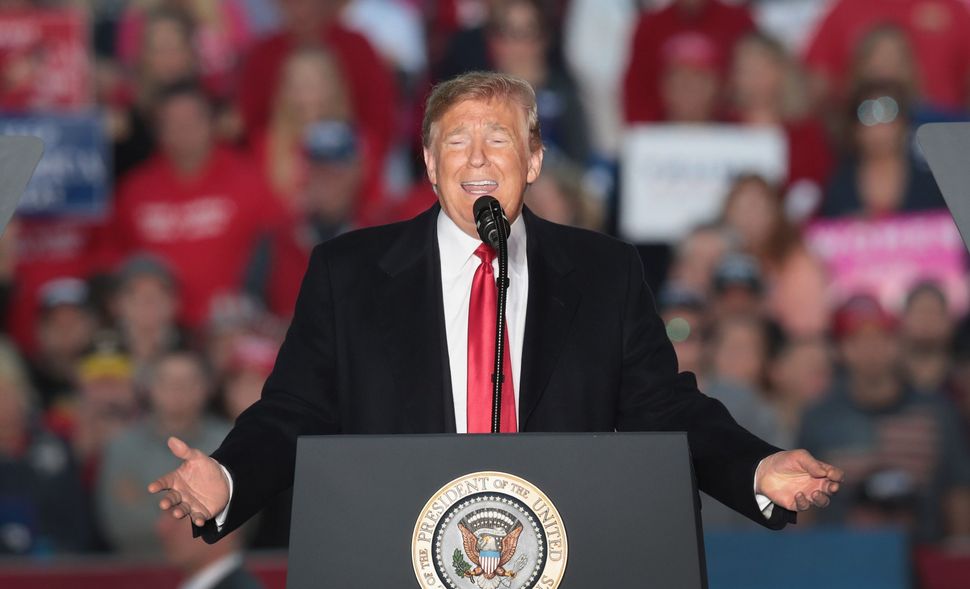 After Pittsburgh, with 11 Jews dead, the recriminations began swiftly. The moment should have been about community and togetherness. Instead it became about finding someone to blame for anti-Semitism.

The finger was pointed at President Donald Trump.

The progressive group Bend the Arc issued a statement telling Trump he’s “not welcome in Pittsburgh.” The story got picked up as “Pittsburgh Jewish Leaders tell Trump he’s not welcome.” CNN and MSNBC went wall-to-wall about Trump’s “rhetoric.”

This was all Trump’s fault, they argued. His rhetoric had fired up this man to go into a shul on Shabbat and open fire. It didn’t matter than the shooter had actually objected to Trump’s rhetoric. He thought Trump was controlled by Jews. He considered that Trump had “betrayed” the neo-Nazi protesters in Charlottesville, Virginia who chanted “Jews will not replace us!”

Those were the facts. But emotions were running so high that few would point them out.

Instead, the drumbeat from mainstream outlets got louder. Fresh from blaming Jews who supported the U.S. embassy move in Israel, GQ Magazine’s Julia Ioffe took to CNN to say that Trump had radicalized more people than ISIS. She had since apologized, saying emotions got the better of her, but she continued to appear on CNN making proclamations such as “the majority of Trump’s supporters think racism is okay.”

In an era where facts allegedly matter, they sure don’t seem to when they can’t be used against Trump.

The problem with blaming Trump for anti-Semitism is that it ultimately fosters ignorance of anti-Semitism. Blaming Trump lets the anti-Semites off the hook. It’s not them slaughtering our people in the pews, it’s Trump who is really responsible. It also helps Jews stick their collective heads in the sand. It allows Jews to continue functioning as if anti-Semitism hasn’t always been, and always will be, a problem.

After all, if it’s Trump that causes it, this spike in anti-Semitic events in America and around the world will end when he’s gone.

But anti-Semitism didn’t start with Trump and it won’t end with him.

The other issue with Trump-blame is that anti-Semitism isn’t just a problem from one direction. It feels safer to put all the anti-Semites in America in the “White Supremacist” box but that’s just not the case. If it were, it would be mean we had little to fear.

It’s not hard to find major attacks in America that predate Trump which were aimed at Jews in recent years, including the 2002 attack at LAX airport which targeted the El Al counter, the 2006 shooting at the Seattle Jewish Federation, the shooting at the United States Holocaust Memorial Museum in 2009, the two shootings at the Jewish Community Center of Greater Kansas City and Village Shalom, a Jewish retirement community, both in Overland Park, Kansas in 2014 and one back in Pittsburgh in 2000 which left five people dead.

Not all of them were committed by “white supremacists” — but that’s the whole point. Jew hatred doesn’t come from just one place or from just one group.

In the last year, New York City has experienced a rash of violent attacks on Jews. But these attacks were not committed by people in red Make America Great Again hats or screaming Heil Hitler. They were committed by people of various races, of both immigrant and American-born backgrounds, a cross-section of people displaying their hatred of Jews through violence.

These attacks barely registered a blip. There were no marches or protests. There wasn’t an easy target, such as Trump, on whom to pin the blame.

It’s far more difficult to admit that anti-Semitism has long existed in many hearts and still does.

Blame of anyone but the person firing the gun is the problem. How often have European countries excused or ignored attacks on Jews by pretending that Israeli policies caused those attacks? Blaming Trump is just an extension of that. Ioffe’s point was that Trump being “pro-Israel” had caused the attack and Jews were culpable in their own deaths because they support his positions. These wretched beliefs should find no quarter among Jews. And yet, because the political target is on the right while most American Jews are on the left, it does.

Writing at the National Review, Ben Shapiro noted that “America has been uniquely friendly and welcoming to the Jews.” This is a fact. But what Shapiro calls the “ancient virus” still surfaces from time to time.

Don’t give those with the virus an out by blaming their actions on the president. Anti-Semitism is real and deadly.