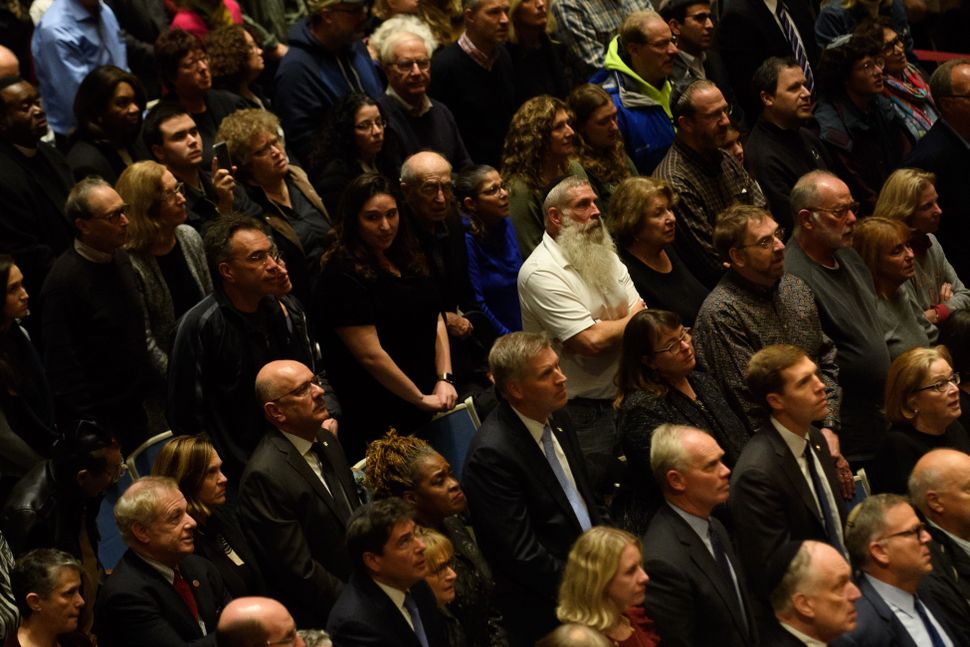 In the wake of the horrific massacre of 11 Jews at prayer this Shabbat, I have found myself wondering what it means to be a Jew in the age of Trump.

It was a question that preoccupied me on the day he won the presidential election in 2016, on the strength of a campaign that flirted with white nationalism.

The question returned to me in August 2017 after a far right rally in Charlottesville, Virginia, where white nationalists chanted “Jews will not replace us!” With Steve Bannon — a white nationalist — and Sebastian Gorka — member of a Nazi-affiliated party — installed in the White House as advisers and neo-Nazis marching in the streets, suddenly we American Jews were no longer a model minority but an embattled one.

We are not, of course, embattled the way people of color are; no Jew can credibly claim that our situation is anywhere near as precarious as that of black and Latino and Muslim communities. And some Jews, of course, support Trump. His popularity among the Orthodox has skyrocketed since he took office.

But what Trump has done more than anything else is reveal — and heighten — the already existing contradictions in Jewish American life.

We’re at home – but anti-Semitism still proliferates. We have white privilege – but not all of us are white. We’re safe – but white nationalists march. We’re liberal – but some of us voted for Trump. We’re pro-immigrant and pro-LGBTQ and pro-choice – except those of us who aren’t. We are pro-Israel – but not this Israeli government. We’re a religious minority, but also an ethnic group.

We are a racial minority in America – but one for whom the police will throw themselves in the line of fire.

We are the brothers and sisters of George Soros – but also Sheldon Adelson.

We are Reform, Conservative, and Orthodox. We are Jews of no religion.

It’s these contradictions inherent in Jewish life that Trump has augmented, just as he has for American life overall.

Trump has made the difference between left and right, Democrat and Republican, liberal and conservative into an existential one. He has exacerbated and intensified the already-existing fault lines, turning them into deep and impassable craters.

And just as Trump has made regular Americans feel these differences at a gut level, he’s also made many in the Jewish community anxious to resolve our own tensions.

Many on the left have called for Trump’s Jewish supporters to acknowledge the way their support of Trump has enabled him – and thus enabled the rhetoric that incited the synagogue murderer. Others have called for them to be shunned. One writer went so far as to ask if support for Trump was “worth it” given the murder of 11 Jews.

But these contradictions are of course precisely what make the Jewish community great – something the Squirrel Hill Pittsburgh community knew well. The synagogue that the shooter attacked is home to three different communities, one Reconstructionist and two Conservative. The neighborhood is home to many more, full of Jews of different denominations and beliefs and political parties.

What the horrific murder in that synagogue last Saturday morning revealed to me was that the role of us Jews in the age of Trump is to remind America that there can be unity in diversity, strength in debate, salvation in difference.

These were the most salient characteristics of Squirrel Hill and the Tree of Life synagogue.

The role of the Jew in the age of Trump is to celebrate our differences – from each other and from the white majority.

And it’s to remind us of our difference from the minority communities who have it so much worse than we do.

One of the most incredible aspects of the horror of the Pittsburgh shooting was the bravery of the police officers who threw their bodies into the line of fire — literally — to protect Jewish lives. We Jews are no strangers to murder, or even mass murder.

How strange it was to see ourselves being rescued. How awe-inspiring.

And yet, not every American community has brave police officers running into the line of fire to protect them. Other minority communities, like black and Latino communities, struggle to get fair treatment from law enforcement, even struggle to avoid being shot themselves.

We Jews are incredibly privileged in this way. Similarly, the kind of attack we were shocked by on Saturday is a more common occurrence in other communities, too.

Just the day before the massacre in Pittsburgh, another white supremacist murderer approached a black church in Louisville, Kentucky, banging on the doors, trying to get in. Unsuccessful, he had to settle for murdering an innocent black couple in a Kroger grocery store.

It’s another contradiction in Jewish American life: being cognizant of our privilege, and using it to help those who are equally hated by white supremacists, if not equally protected by law enforcement.

And it’s these communities who showed up for us in the wake of our tragedy. The outpouring of love from other minority groups has been enormous. Two Muslim groups have raised over $100,000 for Tree of Life – in two days. “We wish to respond to evil with good, as our faith instructs us, and send a powerful message of compassion through action,” the campaign reads.

There have been interfaith vigils in communities across the country. Churches, too, have held services, like the Emanuel African Methodist Episcopal Church, where Dylan Roof murdered nine people during a Bible study group.

It was for standing up for Muslims and immigrants that 11 Jews in Pittsburgh were martyred, for embracing the other at a time when the uniformity of whiteness has increasing appeal to those who hate us.

But across the board, the age of Trump has made difference into danger; all across our nation, in communities real and virtual, and there is increasing pressure to resolve contradictions.

We Jews are a reminder to America that there is another way.