Last week, Prime Minister of Israel Benjamin Netanyahu shocked Jews worldwide when his office revealed it would be working with Hungary on a museum dedicated to Holocaust revisionism. As if that wasn’t bad enough, the museum will be curated by a woman whose magazine targeted the Hungarian Jewish community’s president, András Heisler, in an anti-Semitic campaign. When Heisler tried to set up a meeting with Netanyahu, he was rebuffed.

This ugly story is only the latest chapter in Netanyahu’s crimes against Diaspora Jews. His first two forays into compromising the legacy of the Holocaust, his closeness with far right, even anti-Semitic leaders like Hungary’s Viktor Orban, and his cuddling up to the Trump Administration — even in the wake of the massacre in Pittsburgh that many American Jews laid at Trump’s door — are just a few of the ways in which Netanyahu has betrayed the Diaspora community. 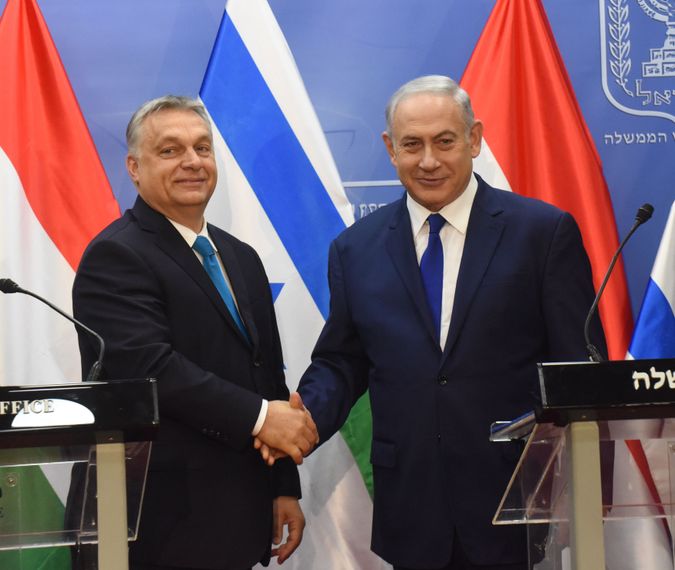 American and Israeli Jews no longer agree about what constitutes anti-Semitism — or where it comes from.

The American Jewish community is by and large liberal. 80% of American Jews voted for Democrats in the recent midterm elections. And this liberal persuasion is not incidental; it is a crucial component of their Jewish identity.

The neo-Nazis marching in Charlottesville, Virginia, chanting, “Jews will not replace us” are a perfect example of this, as is Robert Bowers, the Pittsburgh shooter. He murdered 11 Jews in the Tree of Life Synagogue explicitly because he believed they were liberals who were helping refugees enter America. And they probably were.

Like the neo-Nazis in Charlottesville, Bowers had a murderous hatred for the liberal character that is the unique heritage of liberal American Jews.

Israelis view their Jewishness quite differently, and consequently, they view anti-Semitism differently, too. If the motto of American Jews is Olam Chessed Yibaneh (“Let the world be built out of kindness”), the motto of Israeli Jews is Bechol Dor Vador Omdim Aleinu Lechaloteinu (“In every generation, they rise up to wipe us out”). 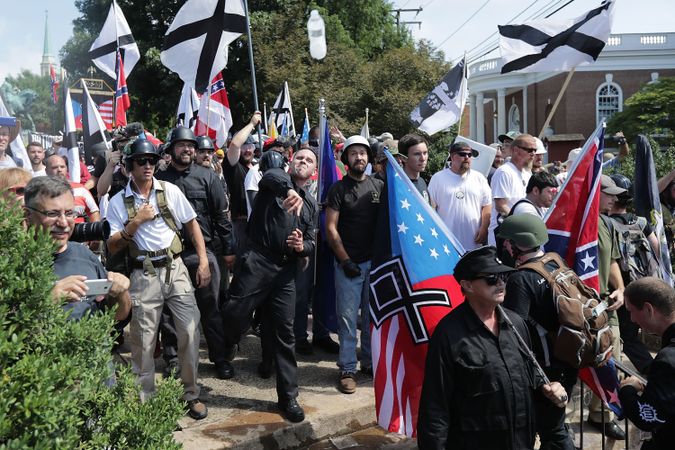 Hundreds of white nationalists, neo-Nazis, KKK and members of the ‘alt-right’ marched at the Unite the Right rally August 12, 2017 in Charlottesville, Virginia. Image by Getty Images

Another recent Pew study found that while Israeli Jews were split about whether they identified first as a Jew or first as an Israeli, those who identified first as Jewish were much more likely to be hawkish politically; they mistrust the Palestinians more than other Israelis, and are skeptical about the chances for peace.

In other words, while not all Israelis are hawkish, Israelis tend to see Jewishness as containing an inherent tension with the “other;” it’s about how much they hate us, rather than what values we choose to live by. This means that Jewishness is not a religious identity based on values so much as a nationalist, political one, one that views Jews in opposition to a hostile world around them and an ethno-state as the solution to that fundamental existence.

Hence, 79% of Israeli Jews polled felt that Jews should have preferential treatment in Israel, a belief that is anathema to the American Jewish community’s commitment to equality and justice.

“Being Jewish in Israel is not correlated with liberal values but rather with nationalism, and a certain hawkishness vis-a-vis the other,” explained Dr. Shlomo Fischer, a senior fellow at the Jewish People Policy Institute in Jerusalem, in an article in these pages explaining the findings.

Because Jewishness is a national identity for Israelis, they interpret a hatred of Jews as being political, too; most frequently, Israelis see anti-Zionism as anti-Semitic, since it threatens their nationalist aspiration, which is at the core of their Jewish identity.

This also means that these Israelis will most often view anti-Semitism as coming from the left, and often from Muslims and especially Palestinians, who represent Israel’s chief political antagonists, whether or not they have antipathy for Jews. 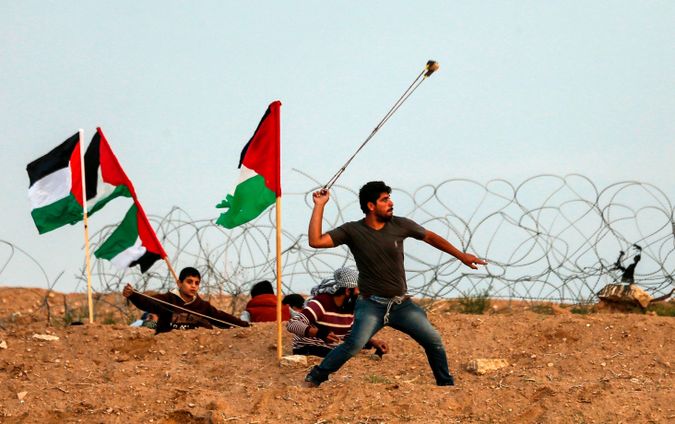 A Palestinian man uses a slingshot to throw stones towards Israeli forces during a protest, east of Gaza City near the Israeli border on November 16, 2018. Image by Getty Images

Thus, when presented with a CNN poll a few weeks ago showing the blatant hatred of Jews across Europe, Netanyahu’s take away was that “anti-Israeli policies, the idea that the Jewish people don’t have the right to a state, that’s the ultimate anti-Semitism of today.”

And when he was specifically asked about Hungary and Poland, countries that rated the highest for straight up bigotry against Jews and whose leaders have engaged in anti-Semitic campaigning or Holocaust denial, Netanyahu denied their anti-Semitism, reaching again for anti-Zionism. “I think that ultimately the real issue is can we tolerate the idea that people say that Israel doesn’t have a right to exist, which I think is the ultimate anti-Semitic statement,” he said.

To be confronted with hatred of Jews in the Diaspora and to call it is ancillary to anti-Zionism certainly takes some chutzpah. And yet, I think Netanyahu truly can’t see the anti-Semitism of his fellow leaders of ethno-states for what it is, because despite engaging in anti-Semitism against the Jews in their own countries, these leaders are, in fact, Zionists. As the leaders of and believers in ethno-states, they support the ethno-state of the Jews. And because Netanyahu sees Jewish identity as a national and political form of identity rather than a religious or ethnic one, they support Jews in his view.

These are generalization, of course. There are plenty of liberal Israeli Jews and hawkish American Jews. In fact, my own critics have rightly accused me of erasing conservative Jews from what it means to be Jewish in America today. 80% of a community is not its entirety, and America has a thriving Orthodox community that is by and large pro-Trump and views Judaism as an amalgam of religious practice and nationalist longing. And on the other side, minimizing the Jewishness of Diaspora Jews, especially those who criticize Israel, is par for the course.

More important though is an analytic failure to understand what anti-Semitism looks like in the United States. This failure was on full display in the Israeli response to the Pittsburgh massacre, epitomized by the Diaspora Affairs Minister Naftali Bennett’s remarks.

“From Sderot to Pittsburgh, the hand that fires missiles is the same hand that shoots worshippers,” Bennett said the day after the shooting.

For American Jews, Bennett’s words were deeply offensive. The rockets at Sderot may be hurled by people who harbor anti-Semitic thoughts, but they are hurled for political, rather than racist reasons. Meanwhile, the martyrs of the Pittsburgh massacre were murdered for Jewish and liberal values.

Bennett’s Ministry, along with the Government Press Office, took things one step further at the end of November, at a summit held for Jewish bloggers from around the world in Jerusalem. There, on the first morning of the summit, the organizers laid down a massive Jewish star in black tape on a stone platform. Inside the star, they had made the number 11 with the same tape, to commemorate the 11 martyrs from the Pittsburgh synagogue shooting. They then instructed the bloggers to stand on the Star of David and along the number 11, and on the count of ten, to make an “IDF salute” to a rising camera.

It’s hard to think of a more offensive way of commemorating the massacre than turning it into a photo op for the Israeli Defense Forces. And yet, seeing as those American Jews were murdered for ascribing to a version of Judaism that Israel is losing the tools to recognize, I shouldn’t have been surprised.

For the fact is, it’s not just that for Israelis, anti-Zionism is also anti-Semitic. It’s that it’s the only version of anti-Semitism they now recognize.

This viewpoint endangers Jews in the Diaspora by whitewashing right wing anti-Semites and their apologists. But it does something much worse than that, too. For threats to Israel as an ethno-state don’t begin and end with Palestinians. American Jews also pose a threat to the very notion of Judaism as an ethno-nationalism, by insisting that Judaism is based on ethno-nationalism’s opposite: liberal democracy, equality, and justice.

Our refusal to move to Israel, our refusal to feel embattled, our pride in America as our national home and our insistence on banding together with America’s minorities — including its Muslim minorities — are not only a challenge to the Israeli model of Jewish identity; they are a slap in its face.

This is why American Jews are so often called anti-Semites when we criticize Israel; because from an Israeli point of view, we are opposing their version of Jewishness. But if being Jewish is a question of values, as it is in the American view, then the Jewish State can betray those values. And it has. With its nation state bill that privileges its Jewish majority at the expense of its minorities, its occupation of millions of Palestinians dispossessed of civil rights, and the religious monopoly of the ultra Orthodox over issues of personal status and conversion, the Jewish State is lacking the very values American Jews consider to be Jewish values. No amount of Jewish stars, Hebrew anthems and historic sites can cover that up.

The truth is of course that there is anti-Semitism on the left and the right, which must be recognized by both communities, if only because it must be fought in different ways depending on its source. Fighting Iran’s anti-Semitism is certainly going to look different from fighting Richard Bowers’, or Louis Farrakhan’s, or that of the Labour Party in the UK.

But your ability to recognize anti-Semitism on the other side is going to depend a lot on what you think it means to be a Jew. And that increasingly depends on what side of the world you live on.