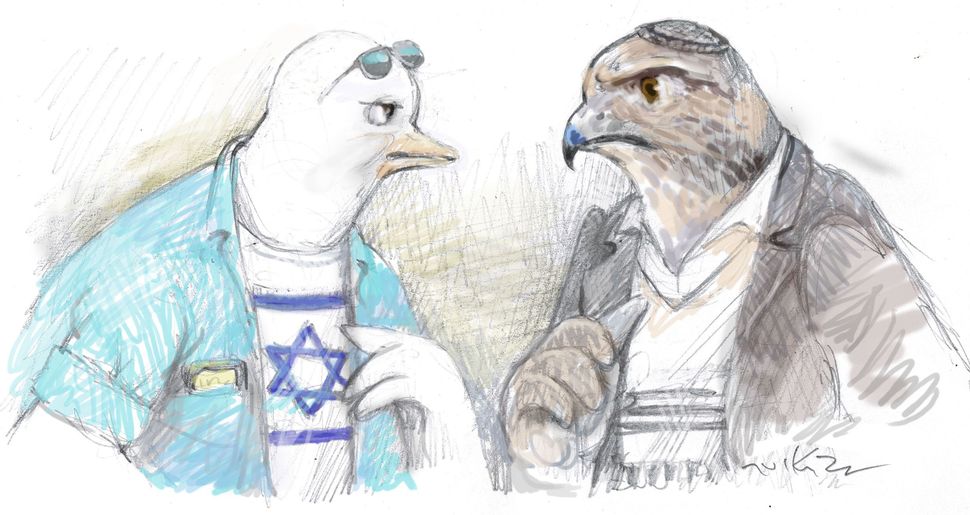 By now it’s accepted that the American Jewish community and Israel are in crisis mode. Once bound by the tightest of familial bonds, the two communities have grown ever apart, leading to much hand-wringing.

The cause of the crisis is generally chalked up to Israeli Prime Minister Benjamin Netanyahu’s policies – his embrace of the ultra-Orthodox, his scuttling of a Kotel deal that would have allowed Reform and Conservative Jews to pray in their own fashion at the holy site, and his support of the settlement movement.

But there’s another aspect to the divide that fewer people have noted, and it’s a definitional one.

Put simply, American and Israeli Jews no longer agree on what it means to be “Jewish.”

Liberal American Jews identify being “Jewish” with having a set of liberal orientations and values. But in Israel, being “Jewish” is correlated mainly with nationalist and right-wing values and views.

Even more surprising is the fact that Israelis themselves don’t agree about whether they are Israeli — or Jewish.

Liberal American Jews tend to talk about “Jewish values” without further qualification. By that, they generally mean progressive or liberal values connected to ideas about social justice, and the American Jewish community overall puts a heavy premium on the rights of immigrants, the LGBTQ community, women and minorities.

Thus, the non-profit group T’ruah, The Rabbinic Call for Human Rights, says that its mission is to “bring together rabbis and cantors from all streams of Judaism” and “to act on the Jewish imperative to respect and advance the human rights of all people.” Similarly, Rabbi Dara Frimmer of Temple Isaiah in Los Anglels characterized the attitude of her age cohort as understanding “that it will take away your Jewish identity if you don’t fight for justice.” “Jewish Values are to Welcome Strangers, Something Trump Doesn’t Stand For,” ran the headline of a typical oped.

And Rabbi Rick Jacobs, leader of the Reform movement, went so far as to say at the URJ Biennial in 2017 that ISrael’s settlements in the West Bank “run counter to higher Jewish values.”

In Israel, things are quite different. Being Jewish in Israel is not correlated with liberal values but rather with nationalism, and a certain hawkishness vis a vis the other.

This is not just anecdotal, but born out by data. 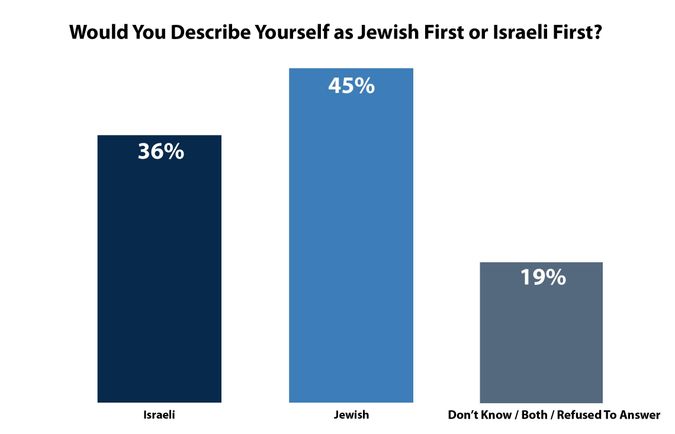 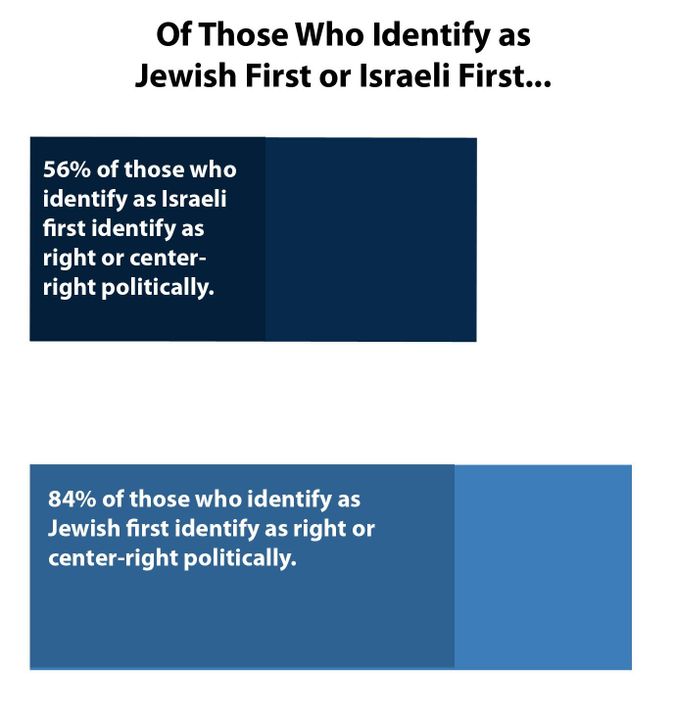 Equally interesting were the respective views of the two groups concerning the conflict with the Palestinians and the chances for peace.

Those who identified first as a Jew exhibited skepticism about the chances of peace, great mistrust of Palestinians, a belief in the sincerity of Israel’s efforts toward peace and a belief in the security value of the West Bank Jewish settlements.

Meanwhile, those who identified as Israeli first, for the most part, exhibited contrasting views on these subjects.

This difference is especially strong for secular and traditional (but not Orthodox) Jews, and presents itself even among those who identify as right wing. 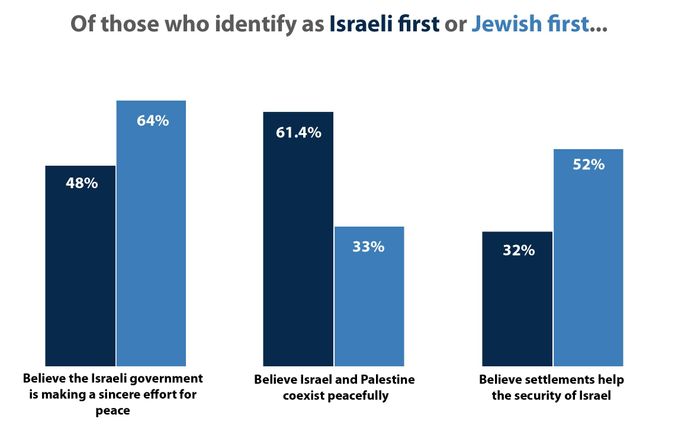 But among those that think of themselves as Israelis first, only 32% think that they help while 42% think that they hurt (for comparison sake, a scant 15% of American Jews think the settlements are important for Israeli security).

In other words, identifying yourself as “Jewish” first as an Israeli correlates highly with being more hawkish overall.

This divide in Israeli identity also explains a lot about the Diaspora-Israel divide. It exemplifies another important and overlooked phenomenon, namely, that the non-Orthodox modernization of Jewish identity proceeded along parallel but different tracks in America and Israel.

In America, Jews modernized by identifying Jewish values with American — a.k.a. liberal — values. Thus, Jews in America evolved such that they could both participate in American civic life and yet retain their minority ethno-religious identity in whatever form they chose. Jewishness became not a national phenomenon but a religious one that remained entirely copacetic with belonging to the American nation.

Meanwhile, with the establishment of the Jewish State of Israel, Jews in Israel transcended what had historically been a particularistic, traditional identity by forming an entirely new collective — a Jewish national state. This new identity was denoted by new terms: Israeli, or Hebrew as in Hebrew University.

This evolution was connected to Zionism, which was initially a movement to found a Jewish state. However, especially in its early formative decades, it was much more than that. In a revolutionary move, it sought to replace the Jewish ethno-religion with membership in a political national collective.

One extremely important aspect of this transformation was the relationship to non-Jews.

Historically, in the old, pre-Zionist model, the traditional pattern of Jewish identity emphasized a fundamental opposition between Jews and non-Jews. Anti-Semitism and its violent expressions — pogroms, persecution and even genocide — were considered by Jews to be expressions of a cosmic relationship of opposition and hostility; “In every generation, they rise up to destroy us.”

It was this relationship that Zionism in its way, and American Jews in theirs, sought to alter.

The Zionist analysis of anti-Semitism argued that the Jews anti-Semitism resulted from the anomalous nature of the Jews, who were a national group without a national homeland or their own nation-state. To use Pinsker’s phrase, they were a “ghost people,” and hence inspired fear and hatred.

Early Zionists argued that if they founded a Jewish nation-state and replaced the ethno-religious framework of Jewish life with a political, national framework, they would become like other nationalities and that would remove the “cosmic” irrational element of anti-Semitism. In becoming like the members of every other national group — Greeks, Italians, Frenchmen — the fundamental cosmic opposition between Jews and non-Jews would disappear.

It is this tradition that is carried on by Israelis who identify as Israeli. And yet, among a larger portion who still identify as “Jewish,” this gambit has clearly failed. After 70 years, the majority of Israelis, and those who have been in power for last two generations, reject this revolutionary revision.

Those who put their Jewish identity first tend to mistrust the Palestinians even more than other Israelis and are skeptical of the chance for peaceful coexistence between Israel and a Palestinian state. They also believe that Israel’s security is improved by fortifying the territory under its control by military and settlement presence. With these beliefs, they are rejecting the revolutionary aspect of the Zionist interpretation of history, insisting instead upon the eternal, cosmic tension between Jews and non-Jews.

And those who identify as Israeli first are accepting the revolutionary Zionist worldview. They, like their American counterparts, do not believe in a narrative of cosmic and existential hostility and opposition between Jews and non-Jews.

Of course there are many factors that contribute to the formation of political opinions and attitudes. In Israel in particular the Second Intifada and the breakdown of the Oslo peace process contributed to the strengthening of right-wing opinion.

What the statistics cited above show is that all thing being equal, those who describe themselves as Jewish first are more skeptical of a peace agreement, believe to a greater degree in the value of the settlements and are overwhelmingly distrustful of the Palestinian leadership.

The political divide in Israel is frequently understood as an argument concerning the relative weight of various pragmatic considerations: demography vs. security and the like.

Taking this analysis into consideration means acknowledging that the dilemma is not only about whether the security risk of giving up the West Bank would outweigh the challenge involved in retaining the West Bank. Rather, the very perception of the security risk is dependent on deep-seated issues of identity.

Dr. Shlomo Fischer is a senior fellow at the Jewish People Policy Institute in Jerusalem and teaches sociology in the School of Education, the Hebrew University of Jerusalem.