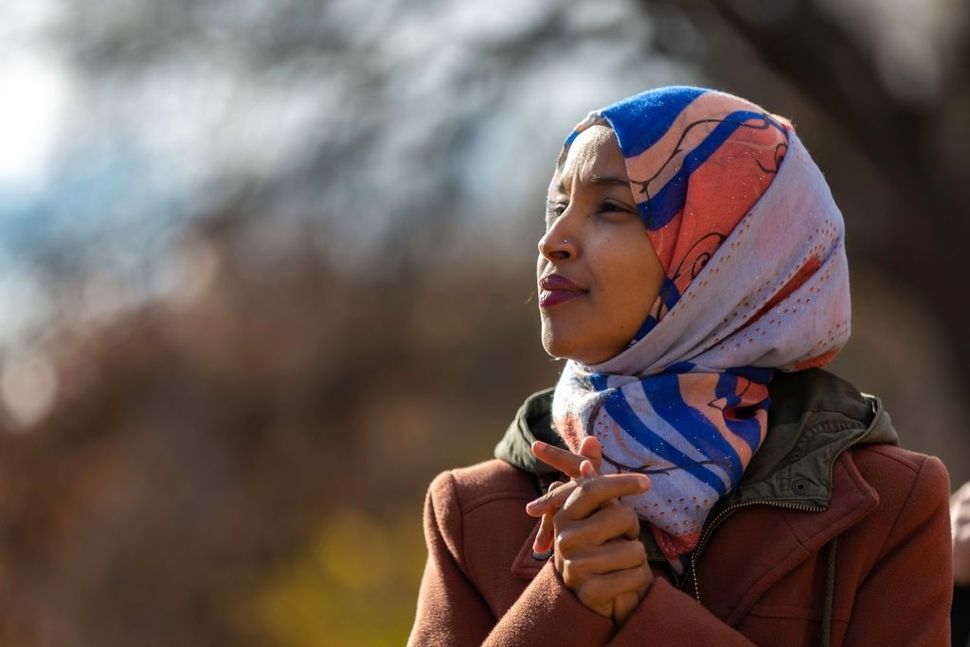 Democratic congressional candidate the Midterm elections, Ilhan Omar, speaks to a group of supporters at University of Minnesota in Minneapolis, Minnesota, on November 2, 2018. Image by Getty Images

In a tweet to Forward Opinion editor Batya Ungar-Sargon, Representative Ilhan Omar expressed that she believes AIPAC paid politicians to be pro-Israel.

The statement, which is false because AIPAC doesn’t make political donations, led several notable figures to join Ungar-Sargon in condemning the Minnesota Democrat for drawing on the anti-Semitic trope of bribery.

The Twitterstorm began on Sunday when Omar responded to California representative Kevin McCarthy’s call to have her punished for previous statements against Israel. “It’s all about the Benjamins baby,” she tweeted, referring to the $100 bill.

Ungar-Sargon tweeted to her, asking who the freshman congresswoman thought was paying off politicians.

Please learn how to talk about Jews in a non-anti-Semitic way. Sincerely, American Jews. https://t.co/qo3BU2Pqgn

It caught the attention of figures such as Chelsea Clinton and House Speaker Nancy Pelosi, who spoke out against anti-Semitism.

Co-signed as an American. We should expect all elected officials, regardless of party, and all public figures to not traffic in anti-Semitism.

In our conversation today, Congresswoman Omar and I agreed that we must use this moment to move forward as we reject anti-Semitism in all forms. https://t.co/UpZA3DNgQs pic.twitter.com/1Z6rH65e3M

The controversy comes less than a month since Omar apologized for a past anti-Semitic tweet, in which she wrote “Israel has hypnotized the world” during the war with Gaza.