He was a combat pilot. He’s married to a rabbi. James Mackler is breaking the Jewish political mold. 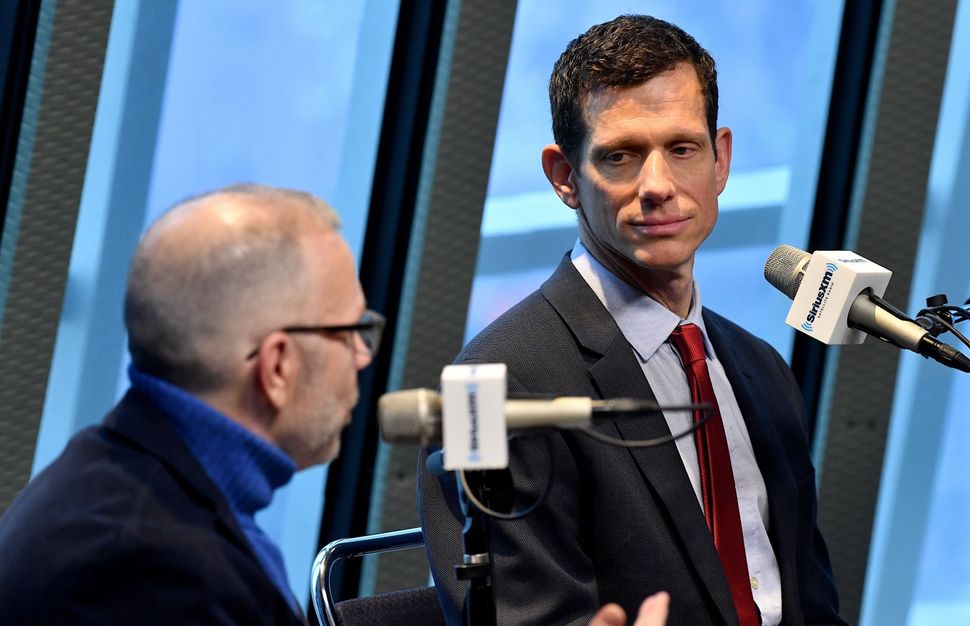 SiriusXM host Michelangelo Signorile and James Mackler attend a panel on “How to on Survive an Authoritarian in a Red State” on December 18, 2017 in Nashville, Tennessee. Image by Jason Davis/Getty Images for SiriusXM

James Mackler has been thinking a lot about certain words from the Talmud during his long-shot run for U.S. Senate in Tennessee: “In a place where there are no worthy people, strive to be a worthy person.”

They were especially prescient on Monday, after a weekend of nationwide protests against racism and police misconduct sparked by the killing of an African-American man, George Floyd, at the hands of Minneapolis police officer Derek Chauvin.

“George Floyd and his family deserve justice,” said Mackler, reflecting on what it means to be worthy. “It took too long for Officer Chauvin to be arrested.” And he had harsh words for President Trump as well: “Inciting violence is not leadership.”

An Iraq War veteran who served both as a combat pilot and as a military lawyer, Mackler said he would fight for reforms to the criminal justice system, including increased federal oversight of local police departments and the universal use of body cameras.

His perspectives on these and other issues are unique not only because of his law and military training, but also because of his Jewish faith. And while he’s not the only Jewish candidate running for Senate, he’s the only one married to a rabbi: Shana Goldstein Mackler, who helps lead Nashville’s largest congregation, a Reform synagogue called The Temple.

They’ve both struggled during the coronavirus pandemic to engage with and help people without physically being in their presence. At The Temple, a Reform synagogue, attendance at Zoom services is up compared to normal times, Goldstein Mackler said.

Mackler said he’s had some success with campaign events over Zoom, and that it actually helps him to talk about his faith. In Tennessee, people want religiosity in their leaders.

Mackler felt the call to serve after 9/11, and left his law practice at age 30 to join the Army. After his first deployment to Iraq was over, he felt a similar internal call – as well as a nudge from his mother – to visit a synagogue. The couple met at The Temple on Simchat Torah. “I thought I was going to introduce him to people and talk about the young adult community in Nashville, and he thought we were dating,” she recounted.

The two decided to become an official couple after going to New Orleans after Hurricane Katrina to repair damaged buildings with the Jewish disaster relief organization Nechama. “We went on that trip together, sitting there covered in mud and gross old water, and realized that we both had this passion for helping people,” she said. “I was really moved by his commitment and willingness to put his whole self into something that he believed in.”

Indeed, one of Mackler’s goals as a senator is to incentivize young people to participate in public service programs – either in the military or in civilian programs like AmeriCorps. “This president, for three budgets in a row, sought to reduce or zero out service programs,” he said.

“Those programs should have been seen as down payments on a more robust civic system. We should be encouraging more people to serve their communities.”

Goldstein Mackler said that her husband’s candidacy – potentially a polarizing topic – wasn’t affecting her work in her synagogue. “They’ve known for 16 years now that I have a voice, and that a message that I speak of is often of social justice and advocacy, and so that wasn’t going to change,” she said.

It likely helps that Mackler frequently cites Jewish teachings on the trail – and he gets much more specific than just citing “tikkun olam,” the repair-the-world phrase that is the limit of many Jewish Democratic politicians’ knowledge.

He did, however, tie the phrase to another Talmudic citation he frequently thinks about: It is not your obligation to finish the job, but neither are you free to desist from it. “The fact that I can’t fix everything doesn’t relieve me of the obligation to go to Washington and try,” he explained.

But in order to do that, he must first get elected. He will probably get the Democratic nomination in August because he has the endorsement of the Democratic Senatorial Campaign Committee, which gives him access to more donations and resources. But he’s facing a tough general election, likely against Trump’s former Ambassador to Japan. Political prognosticators rank the state “Solid Republican.” Tennessee hasn’t elected a Democrat to the Senate in 30 years, and when well-regarded Democratic former Gov. Phil Bredesen ran in 2018, he lost 55%-44%.

Mackler said he still liked his chances, noting local dissatisfaction with Trump’s trade war and his response to the coronavirus. “We only need 6% more in a presidential year when voter turnout will be in high tide,” he argued.

And in the midst of it all, Mackler and Goldstein Mackler are also supervising their two daughters’ online classes. Having more time at home has been an opportunity to teach them life lessons as well, he said.

“We have the devices, we have high speed internet,” he said he told his children. “But throughout Tennessee, there are so many families who cannot do what we’re doing. The reason I’m running is to make sure every child has access to high quality education.”

He was a combat pilot. He’s married to a rabbi. James Mackler is breaking the Jewish political mold.