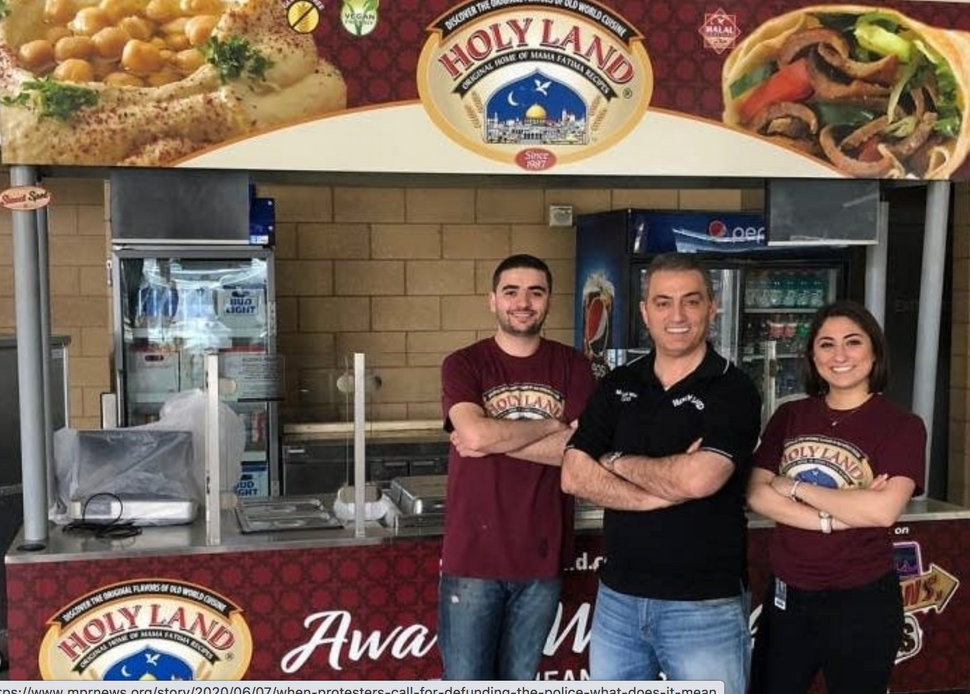 The last time I saw Majdi Wadi, the owner of the Holy Land Brands in Minneapolis, and his daughter Lianne, we had our arms around one another, on stage in a synagogue auditorium.

That was four years ago. The second time we spoke was Monday afternoon, as Wadi’s world was collapsing around him.

Viciously racist tweets and social media posts that Lianne wrote in 2012, when she was 14, had surfaced on the Internet. The reaction was swift and harsh against the 34-year-old company, which has leveraged its authentic hummus into restaurants, a catering company, and a multi-million dollar wholesale business. A building that houses one of Holy Land’s locations, Midtown Global Market, terminated its lease. Several Midwest Costco stores said they would no longer carry the company’s popular hummus. Two major co-operative markets in the Twin Cities also pulled the company’s products from their shelves.

Twitter and Facebook lit up with diatribes against the family. Wadi and his daughter received death threats, someone published his home address online.

In a matter of hours, a family that I had known as warm, open-minded and dedicated to using food to bridge the differences among Jews, Arabs and all people became infamous as the most racist Muslims in the Midwest.

When I reached Wadi by phone, the shock of the last few days had morphed into resolve.

“We are determined to do whatever it takes to make it right, even if we lose the business,” he told me. “What I don’t want to lose is my reputation. I’m not going to go down in history as someone who closed his business because he was racist.”

The first thing he did was fire his own daughter, the morning after the tweets went public.

“You think it’s easy for me to destroy my daughter’s career?” he said. “I fired her because it was the right thing to do.”

I met Wadi in February 2016, when the Temple Emanu-El Streicker Center in Manhattan asked me to lead a panel discussion on hummus. The panelists the center had booked included the director of a documentary on the subject and an Israeli hummus maker in New York. I wanted a Palestinian to speak as well, so we could talk roots, appropriation, authenticity – all the controversial issues contained in a bowl of pureed garbanzo beans.

Two New York-based Arab hummus makers declined, not wanting to appear on a panel with an Israeli. When I learned that the chief executive officer of the Midwest’s largest hummus maker is a Palestinian raised in Kuwait and Jordan, I expected another hard “no.” Instead, Wadi wrote back that he would be honored. He flew to New York, at his own expense, with his wife and daughter – the now notorious Lianne. He even brought cases of free hummus samples.

This was not some prestigious international food festival. It was 150 Jews on a Sunday night in shul. Wadi said two things that evening that I remember clearly. The first was that when you make hummus, you should always blend in some ice cubes. “It makes it creamy, whiter,” he explained — and I have done so ever since. The second was that he refused to even entertain the fraught question, raised by the documentary, of which country or group hummus belongs to.

“What does it matter?” he said. “I know my family and my recipe. It is from the region. It is Middle East. Hummus can be a bridge. We can use it to make peace.”

Wadi told the audience that anti-Israel activists had urged him not to sell to synagogues and other Jewish organizations, especially for Israel-related events.

“I refused,” he said. “I don’t want to boycott. Hummus is for everyone.”

When Wadi called me on Monday, I told him I was having a very hard time reconciling the father and daughter I had met in 2016 with the news I was reading.

Lianne’s tweets are vile. “#IfIwasPresident I’d finish off what Hitler started and rule the world,” she wrote on May 9, 2012. “Holy shit blacks are as bad as Jews. Gas em all I’ve always known,” she tweeted that same month. There are more, many more: the N-word features prominently, and she demeans gays, Somalis, and Mormons, among others.

The posts that have surfaced are from 2012, though Majdi said his daughter also shared a racist Instagram caption in 2016.

Many of the online critics are calling for a total boycott of Holy Land. It is impossible, they say, that Lianne didn’t learn this hate at home.

“I couldn’t even finish reading them all,” he said. His voice was pained and strident. “I raised seven kids, three mine and four of my brother’s. If this is who I am inside my home, all of them will be sharing the same views.”

“I don’t want to throw my daughter under a train,” he said, before detailing a very difficult period in his family’s life.

“She was the first child,” he said. “We had to learn how to raise an American teenager.”

Wadi said Lianne was a troubled adolescent. He lays the blame for her racist language on her high school — where, he said, she was the first Muslim student.

“She was trying to fit in,” he said. “She would come home crying.”

He and his wife hired a therapist to help them communicate with Lianne. They sent her to boarding school for two years, then continued therapy with her after that. Eventually, she received a bachelor’s degree from the University of Minnesota, and Wadi brought her into the business, where she became the head of catering and the restaurant.

He said he’s convinced that Lianne, who has publicly apologized, is not the same troubled teen she was. During the protests over the police killing of George Floyd, he said, Lianne went out on the streets to distribute water bottles to protesters.

“I’m very proud of who my daughter has become,” he told me.

Wadi said no civil-rights complaints have ever been filed against his company. While complaints to the Minnesota attorney general are not public record, the restaurant and wholesale business both have A+ ratings from the Better Business Bureau. On Yelp, where the restaurant has four stars, the negative reviews were about cold French fries or less-than-perfect food, not racist staff.

Wadi told me his 189 employees run the gamut of ethnicities and faiths. He is worried about their future as well. The canceled contracts have already cost him $3 million, and may well cost him his business,

“Why should they be punished,” he said, “for what some teenager wrote 8 years ago?”

For now, Wadi said he will work hard to show what he and his company have always stood for. Holy Land will be creating a foundation to help improve life in minority communities, and it will continue to finance a school in Sudan, where Majdi and his daughter have both volunteered.

I don’t know whether Twitter and Facebook will read these moves as cynical PR ploys or too little too late – the Internet is not generous with second chances. I do know that Majdi Wadi came through for me when no one else would, when doing so would only cost him time and money. Someone’s a bad judge of character. I hope it’s not me.