N.C. rabbis: The ‘moral pandemic’ of racism is a Jewish problem 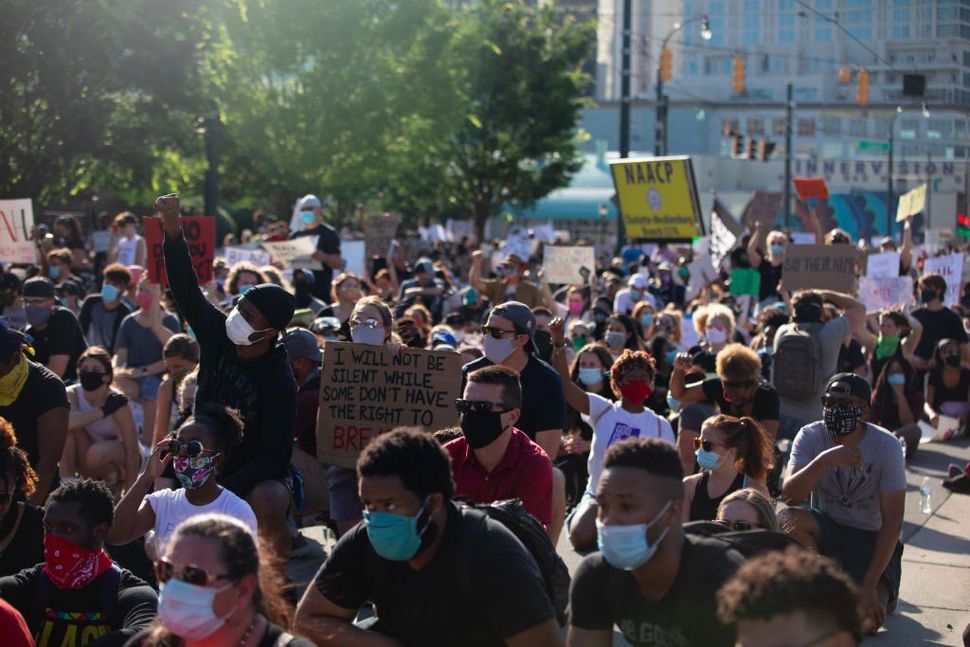 A June 2 protest in Charlotte, NC. Image by Getty

“I experience racism in the Jewish community on a regular basis,” said Rabbi Sandra Lawson, one of four North Carolina rabbis behind an urgent call for American Jews to take action against police violence. “As a black queer woman, I don’t see a lot of people who look like me.”

Long before Lawson was ordained, she had already gathered an informal congregation — on social media. As a rabbinical student, she used Snapchat to deliver short divrei torah, or Torah commentaries, answered questions on Jewish traditions, and carved out a space for queer women of color in a profession long dominated by white men.

Now, her followers can find her on Facebook, where she live-streams morning prayer — complete with singing and guitar playing — all from her porch in Elon, North Carolina.

This week, she used the platform she’s long cultivated to deliver something different — a letter sharply denouncing systemic racism, particularly within the Jewish community, signed by dozens of rabbis and cantors across the Tar Heel state.

Among the many statements released by Jewish groups in the wake of nationwide protests in police brutality, the letter is notable for its exceptionally strong language. It condemns not just the highly-publicized episodes of police violence of the past few weeks but the culture that produced them, referring to the murder of George Floyd, Breonna Taylor, and several others as directly linked to “our nation’s long history of police brutality and vigilante violence.”

“We firmly stand with those who choose to exercise their right to protest in nonviolent ways,” the letter said. “Civic leaders who seek to deny this constitutional right undercut one of the great foundation stones of our democracy.

The letter also makes specific demands, calling on police officers to “hold their colleagues accountable for bigoted actions” and pointing out that renewed anger at police violence comes amidst a pandemic that “has disproportionately ravaged Black, Brown and immigrant communities.”

The letter calls out pervasive racism within Jewish spaces, saying that congregations must reckon with “our community’s failure to fully welcome Jews of Color and our role, even if unintended, in perpetuating racism.”

“We are at a turning point,” Lawson said. “People are finally starting to understand what systemic racism is. That if you are white you’re benefiting from the system.”

Rabbi Eric Solomon, who organized the initiative alongside Lawson, Rabbi Melissa Simon, and Rabbi Matthew Soffer, said the drafting process unfolded organically, even though some of the authors had never actually met. “It was like a chevruta,” he said, referring to the Jewish tradition of group Torah study — “but over Google docs.”

Since North Carolina, a large state with a thriving but small Jewish community, lacks a statewide rabbinical board, clergy are accustomed to ad hoc organizing efforts. Solomon said that earlier efforts to protest HB2, a North Carolina law that prevents transgender people from using their preferred public restrooms, prepared him for the urgency of this moment.

Still, when taking a controversial stance on any issue, “you never know who’s going to raise their voice” and who will stay silent, he said. For him, it was remarkable that “the vast majority of rabbis contacted signed [the letter] immediately.”

For Lawson, that swift collaboration foretells a long-overdue reckoning with white privilege within the Jewish community.

“It took us a long time to move anywhere, and in a short time we’ve moved very fast,” she said, speaking about the wide coalition of rabbis from many denominations that signed the letter.

That sense of urgency, in her eyes, is largely due to the starkly horrifying footage of George Floyd’s death. “Black people have been screaming about this forever, but we have video now,” she said.

“No one can say what was going through that police officer’s mind, but I don’t believe in my heart he saw George Floyd as a human being. Many people, regardless of where they are politically, can see that that is wrong and that something should happen.”

While rabbis can support policy reform through political advocacy, they often have the most impact within their own congregations. Previously, Lawson said, some rabbis felt ill-equipped to address racism within their communities, or just didn’t think it was their job to do so. But, she said, every rabbi can and should take steps to make their synagogues more inclusive — for example, by training congregants to welcome Jews of color without making them explain “their whole Jewish story” upon arrival. She hopes this moment will push anti-racist work to the forefront of rabbinical agendas, even if their congregations are largely Ashkenazi.

“If you wait until you have Jews of color, it’s too late,” she said. “The first time a multiracial family comes in, and someone says the wrong thing, they’re not coming back.”

N.C. rabbis: The ‘moral pandemic’ of racism is a Jewish problem