There’s a memorial in Charlotte to Confederate Judah Benjamin, and the city’s Jews want it gone 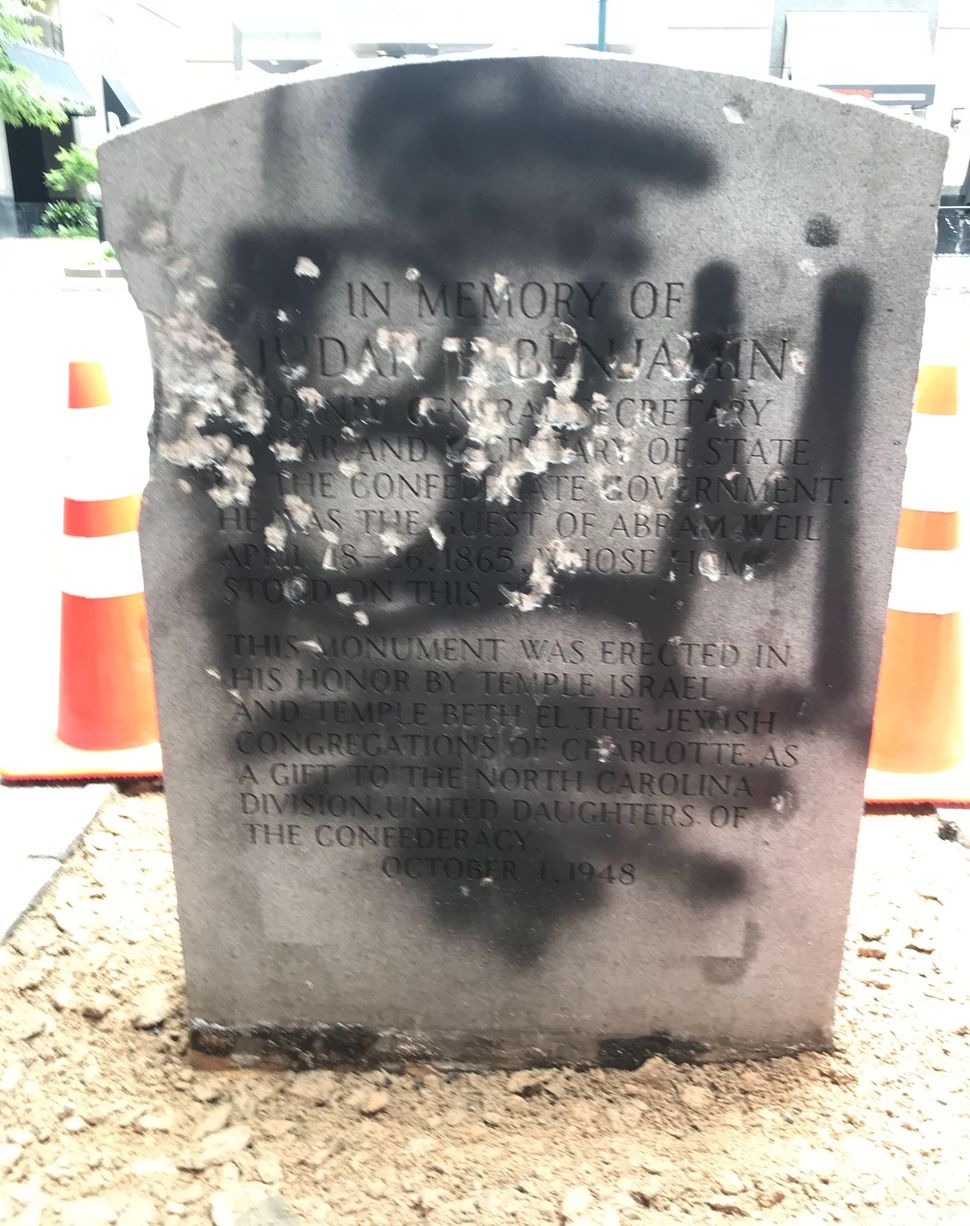 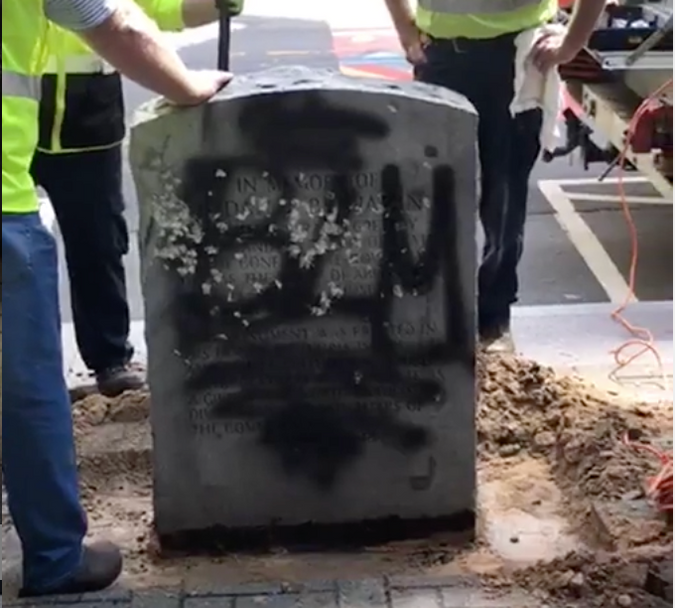 A national push to dismantle memorials that glorify racism might help the Jewish community of Charlotte, N.C. achieve a long-sought goal: the permanent removal of a monument to Judah Benjamin, the most prominent Jewish figure in the Confederate government.

Erected in 1948 by the United Daughters of the Confederacy, the memorial to Benjamin is a short granite stone set in the sidewalk on South Tryon Street, across from a FedEx printing and shipping center, in downtown Charlotte. The monument is supposedly erected near where Benjamin stayed at the home of a local Jewish merchant while on the run from the Union army.

The Jews of Charlotte, despite paying for the stone at the time it was raised, were never enthusiastic about it, and many have grown up without knowing it was there. Now a new generation of community leaders want it gone.

“The monument has never been celebrated in the Jewish community here,” said Rabbi Asher Knight, the leader of Temple Beth El, a Reform community in Charlotte.

The monument is one of only a handful of memorials or monuments to Judah Benjamin, considered by some historians to have been “the brains of the Confederacy.” As a U.S. Senator representing Louisiana, Benjamin used his famous oratorical skills to defend slavery and the Confederate cause. He owned 140 slaves on his 300-acre sugarcane plantation outside New Orleans.

After the South seceded, he served as Confederate President Jefferson Davis’ right-hand man, occupying the roles of attorney general, secretary of war and secretary of state. But his prominent role in the Confederacy has been somewhat lost to history, since American Jews downplayed it and Confederate apologists vilified Benjamin for fleeing to London in the waning days of the war.

In 2017, following a wave of Confederate monument razings and topplings across the South, Beth El’s board voted unanimously to push Charlotte’s city council to remove the Benjamin marker to a different location or find another use for it.

It’s a subtle piece — less than a statue, more than a plaque — in a subdued black stone. Earlier in June, a group of local artists “discovered” it as they painted a massive mural reading “Black Lives Matter” along the street right in front of it.

The monument now looks over the M in “Matter.”

“I knew something was there, but I never actually stopped to read and digest the information until we were all on the block painting it,” said Jimi Thomson, an artist who goes by the moniker Dammit Wesley, and who helped curate the mural. “It was hidden in plain sight.”

Since then, the long-ignored monument has become a subject of discussion in Charlotte — and has been subject to vandalism: Someone spray painted “BLM” across the inscription, which reads “In memory of Judah P. Benjamin, Attorney General, Secretary of War, and Secretary of State of the Confederate Government.” A crowbar, or a jackhammer, or some other metal object has been used to bash hunks of granite off the stone.

On Tuesday morning, Mike Wirth, a local Jewish artist who is planning to create a cover to go over the monument, arrived at its location to take measurements and found a crew of workers from the Charlotte Department of Transportation removing the stones that cover its concrete setting.

Charlotte is removing the memorial to find out what’s beneath it, in case it decides to remove it permanently and needs to help decide what kind of equipment would be needed to do that work, said Cory Burkarth, a spokesman for the city.

He declined, however, to confirm that the city was actually considering that move. Normally, the law requires a historical commission to remove such statues, but there are ways around it. Just days ago, North Carolina’s Democratic governor ordered the removal of two Confederate statues by the statehouse, by saying that they were a safety hazard.

On Wednesday city workers completed removing the marker from Tryon Street, posting several pictures of the process to Instagram. The post said that the city was removing it while it “evaluates the best way to repair the monument.”

At approximately 8 a.m., crews temporarily removed a defaced monument on South Tryon Street as the city evaluates the best way to repair the monument. The City of Charlotte is responsible for cleaning and restoring monuments on public property that have been damaged. The monument was dedicated to Judah Benjamin, an official of the Confederate government.

‘The most objectionable of their race’

The monument occupies a strange place in the annals of Jewish Charlotte.

It was created at the behest of the local chapter of the United Daughters of the Confederacy, which held its national convention in Charlotte in 1948. The Daughters reached out to the local Jewish community, then made up of Temple Israel, its synagogue built in 1915, and a fledgling community in Temple Beth El, then with only about 30 families. The two communities agreed to provide the funds to raise the monument, as a “gift” to the chapter.

“You have to remember that this was 1948 — this was the whitest of white Charlottean Christian groups you can have, approaching the two Jewish synagogues about honoring an important Confederate Jew, just post-Holocaust,” said Knight.

But then a banker from New York intervened: He wrote a letter to the Charlotte chapter of the Daughters, demanding that they not partner with the local Jewish community. The Daughters, the letter read, were under the impression that Charlotte’s Jews were “good Jews.”

“But be not deceived – the so called ‘good Jews’ are ‘good’ only because they are as yet unrevealed, and even the ‘good’ ones work hand in hand with the most objectionable of their race,” the letter continued, according to an account of the incident written by Harry Golden, a Jewish journalist and essayist, and recounted in his 1958 book “For 2¢ Plain.”

The banker’s letter led the local chapter to rescind their offer to the Charlotte Jewish community, which was upset by the incident.

“Innocent bystanders, they now found themselves with a major controversy and an unwanted slab of stone,” Golden wrote. “Many were all for dropping the granite into the Catawba River and forgetting the whole thing as quickly as possible.”

In a twist, the national and state Daughters organizations decided to go against the local chapter, and push the city to install the monument. At a dramatic city council meeting, the Daughters of the local chapter tried to argue that the marker would interfere with people getting on and off city buses — but they were overruled.

But by then, the Jewish community had essentially washed its hands of the monument — and tried to forget about it, Knight said.

It remained in the community’s consciousness, however. Knight’s predecessor at Beth El, Rabbi Judith Schindler, organized classes with the synagogue’s teenagers around the monument, to learn about Benjamin’s history and the role Jews played in the Confederacy. When Knight took over as senior rabbi, he said, Schindler told him that it would be his responsibility to see the monument taken down.

Earlier this month, Knight and Rabbi Howard Siegel, of Temple Israel, along with the presidents of each temple, wrote a letter, reprinted in the Charlotte Observer, urging Jewish Charlotteans to demand the monument be removed.

“We have been putting tons of pressure on the city council and on the mayor to have the thing removed,” Knight said.

Wirth, the artist, said that he still plans to make the planned monument cover, and keep it on the monument as long as it remains on Tryon Street, so it will no longer be a visible sign of Confederate nostalgia. The cover will feature a quote from the Jewish poet Emma Lazarus (“Until we are all free, we are none of us free”) as well as Jewish-inflected Black Lives Matter slogans: No tzedek, no shalom (No justice no peace), and “Jews for Black lives.”

Wirth said that he and others involved in the monument’s removal were planning to continue their pressure campaign on city hall. “But that was gonna be a long road,” he said. “So we thought, instead of letting it show its message, let’s make it show our message.”

There’s a memorial in Charlotte to Confederate Judah Benjamin, and the city’s Jews want it gone