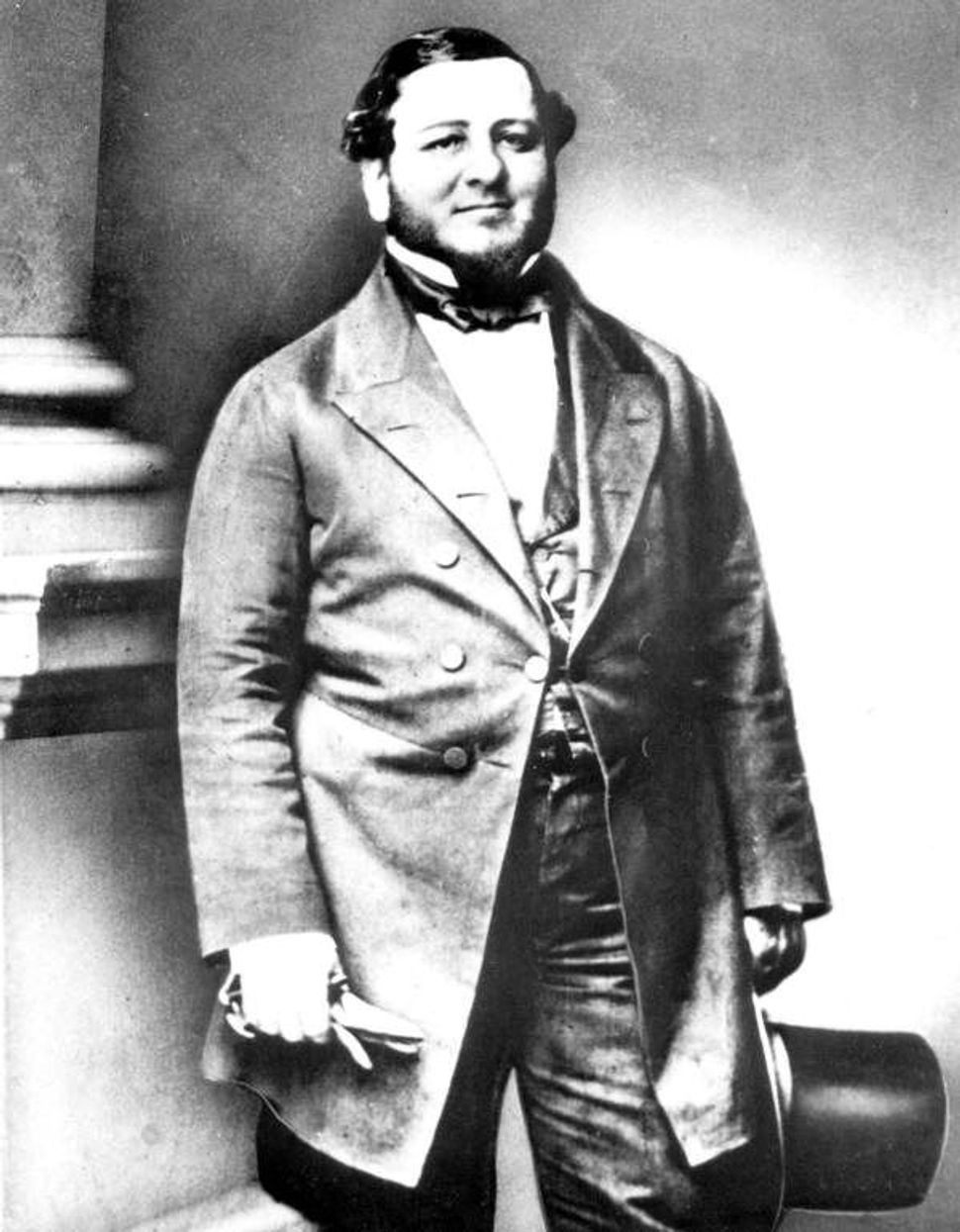 Judah Benjamin sometime between 1861 and 1865. Image by State Archives of Florida

Robert E. Lee, Jefferson Davis and Stonewall Jackson, the three most famous Confederate heroes, have hundreds of memorials and monuments in public spaces throughout the United States dedicated in their memory.

Judah Philip Benjamin, the most significant Jewish political figure in the United States during the 19th century — often called the “brains of the Confederacy” — has four. One is a house that Benjamin never owned. One’s a rusted bell. None of them are statues of his likeness.

It’s impossible to know exactly why that is. But certain aspects of Benjamin’s biography, and the motivations for the creation of thousands of Confederate monuments, offer some clues. Though Benjamin was a brilliant legal mind, a legendary orator and Confederate President Jefferson Davis’s right-hand man, it is likely that he has no major monuments primarily because he alienated himself from both Jewish and non-Jewish Southerners.

“He kind of lost both sides,” Sarna added.

Because of his less-than-revered status, Benjamin has not become a focus of the current movement to remove statues of Confederate figures that has roiled the nation and shaken President Trump’s administration. It was the Virginia city of Charlottesville’s decision to remove a statue of Lee that sparked last weekend’s white supremacist rally, which left one counter-demonstrator dead and many others injured.

In the midst of the national campaign to remove Confederate monuments, some historians say American Jews should be more aware of how their history is deeply intertwined with the Confederacy — and with slavery.

There is only one known statue of a Jewish Confederate leader. It depicts David Levy Yulee, an industrialist, plantation owner and Confederate senator from Florida, and it shows him sitting on a bench. The statue commemorates a railway he built, not his Senate service. It stands in the small northern Florida town of Fernandina Beach (population: 12,500), and so far no one has suggested toppling it. 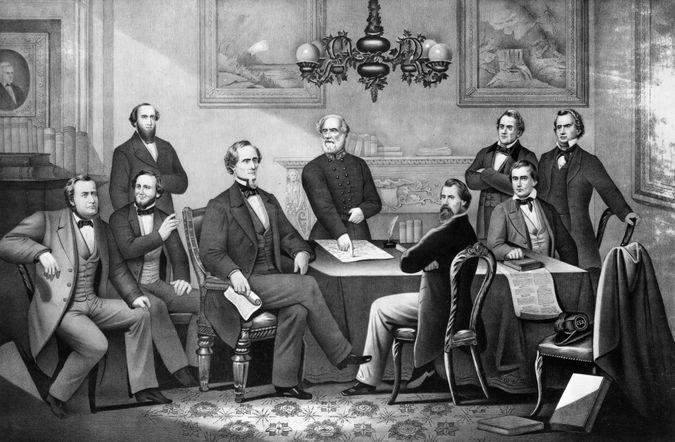 A portrait of CSA President Jefferson Davis with his cabinet, circa 1863. Benjamin is second from left, seated just behind Davis. Image by Getty

Benjamin was the child of English merchants; his ancestors were Jews evicted from Spain in 1492. He was born in 1811 in what is now the US Virgin Islands. After getting kicked out of Yale University at 16, he became a lawyer in New Orleans and married a daughter of a prominent Catholic family. He eventually established a successful practice in commercial law at a time when the city was a center of international trade.

That included slaves. Although Benjamin represented slaves in multiple cases, acknowledging their humanity in public and private, he would ultimately determine that slaves, as property, were a man’s right.

“Judah Benjamin is a great example of how Southern Jews were assimilated into Southern society,” Rosen said. “But of course they accepted all the values of that society, including slavery.”

While it appears that the majority of Southern Jews owned slaves, of those most had only house slaves. (There were only four Jews in 1830 who owned more than fifty slaves.) Benjamin, however, owned a 300-acre plantation and 140 slaves to grow and harvest sugarcane on it. (One of his biographers has asserted that he was a “humane” slave owner.) The final paragraph of Benjamin’s 1861 farewell speech to the U.S. Senate. Image by Library of Congress

Benjamin was elected to the U.S. Senate from Louisiana, and in the Senate he gained a reputation as a legendary orator and as an apologist for slavery. One member of Congress called him “an Israelite with Egyptian principles.” When the moment of secession came, in 1861, Benjamin gave an epic speech on the floor of the Senate, bidding “a respectful farewell” to his “brother senators.”

“He was discreet, loyal, a workaholic, somebody you wanted on your side,” Rosen said. In his book, Rosen writes that Benjamin negotiated loans for the cash-starved Confederacy and was the South’s “spymaster,” possibly even organizing a plot to kidnap Abraham Lincoln in the waning days of the war.

“He certainly was the most important person in the government other than Davis,” Rosen added. 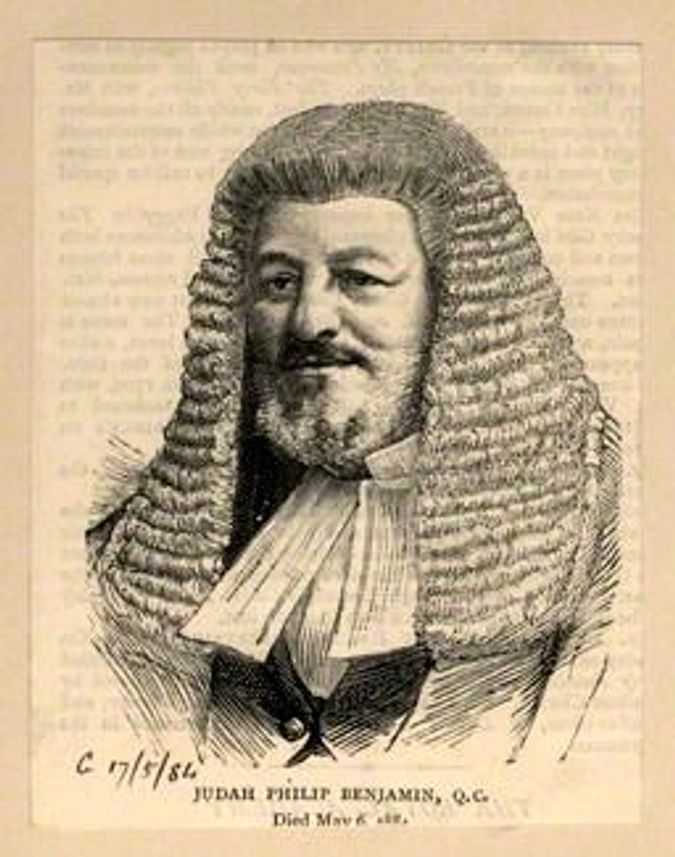 An etching based on a photograph of Benjamin as a barrister in London, dated 1884. Image by National Portrait Gallery

As the South began to lose the war, Benjamin received much of the blame, though in truth he did as much as possible to keep the rebellion alive. Historians agree that he was unduly made a scapegoat for the South’s misfortunes in the war.

Popular sentiment toward him only declined when, in the final days of the Confederacy’s existence, he fled for England by way of the Bahamas and escaped persecution by the North. In London he became a lawyer, and British historians consider him a significant contributor to British legal theory.

As far as leaving a mark on the Southern Jewish community, Benjamin pretty much vanished without a trace. Although he never hid his Jewish ancestry, he made little to no effort to make it part of his personal life.

“Benjamin had a kind of ambivalence towards the Jewish community, meaning he never denied being a Jew and never changed his name, but on the other hand his wife was not Jewish and his daughter was not Jewish,” Sarna said.

Many held Benjamin in low regard for another reason: A lot of historians now suspect that he was gay. This hypothesis, Sarna said, “explains a lot of things.”

For one, Benjamin burned all his personal documents on his deathbed.

“Folks who were gay — well into the 20th century — were enormously self-conscious about being discovered, and few of their papers remain,” Sarna said.

Furthermore, the stated reason for Benjamin’s early dismissal from Yale was “ungentlemanly conduct,” a common euphemism for being homosexual in the 19th century. Perhaps most tellingly, Benjamin’s wife lived in Paris for nearly five decades during their marriage. He visited her and their daughter once a year at most.

Despite all this, there are two central reasons that Benjamin has never been cast in bronze and set atop a granite platform, and they have little to do with the biographical details of his life. One concerns the Southern Jewish community, and the other the motivations for building Confederate monuments in the first place.

The majority of Confederate monuments were erected in the late 19th and early 20th century at the height of white backlash against black political participation during Reconstruction. Benjamin, a politician born in the West Indies, did not fit the nostalgic attraction for Confederate battle-hardness and unshakable Southern identity that was in vogue at that time.

“The memorialization happened long after the war, and it was done in a kind of way to evoke a romantic image of what the Confederacy had been,” said Eric Goldstein, a professor of American Jewish history at Emory University. “Of all the people you could choose to memorialize, Benjamin did not fit that mold.”

Josh Parshall, a historian at the Goldring/Woldenberg Institute for Southern Jewish Life, said that Southern Jews — especially families with deep Southern roots — took part in this Confederate nostalgia. It was not only a way of life, but a way to stay out of the path of white Southerners.

“For those communities that had been in the South at the time of the Civil War, or who arrived shortly thereafter, participating in the commemoration of the Confederacy was a way of being part of the local white communities,” Parshall said.

However, for various reasons these communities were not interested in raising monuments of their own. A popular opinion at the time was that Jews should not create “graven images” of famous Jews, since it would defy the third of the Ten Commandments.

Parshall also noted that the composition of Southern Jews was changing rapidly during the Confederate nostalgia craze of the early 20th century.

Jews pouring into cities like Atlanta and Houston from Eastern Europe had little truck with Confederate apologists. According to Rosen, the one Jewish community that might have put up a statue to the man — in Charleston, South Carolina, where he was raised — was too poor to memorialize much of anything: That city’s monument to the Confederacy wasn’t erected until 1932.

There was at least one attempt to raise a real statue of Benjamin — but it wasn’t even by a Jewish organization. In August 1910, The Daily States, a New Orleans evening newspaper, suggested in an editorial that the city’s planned memorial to Davis include a statue of Benjamin on the other side of Canal Street, in downtown New Orleans. “We refer to Judah P. Benjamin, one of the most remarkable men of his age, and one of the most intellectual his splendid race has produced,” the editorial read.

“The life of such a man ought to be an inspiration to mankind. To the members of the Jewish race, upon whom he shed such luster, it ought to be particularly a labor of love to inaugurate and carry to success a subscription movement to make the monument possible,” the editorial added.

But when the statue of Davis was eventually erected in 1911 and the street adjacent to it renamed Jefferson Davis Parkway, Benjamin’s likeness was nowhere to be seen. It’s unclear why.

The city of New Orleans removed the Davis statue in May.

Today, Benjamin’s legacy lives on in strange ways, even though he hasn’t been a focus of the pushback against white supremacists that is sweeping the nation and has put Trump on the defensive.

Benjamin’s face appears on the Confederacy’s $2 bill, which was issued in 1862. It fetches about $25 on eBay. (The $1,000 bill, featuring John C. Calhoun and Andrew Jackson, has sold for tens of thousands of dollars at auctions.)

Some “alt-right” conspiracy theorists have tried to frame Benjamin as kind of a Trojan horse for Jewish influence in the Confederacy. One Jewish “alt-right” blogger, known as Reactionary Jew, uses Benjamin’s face as his profile picture on Twitter.

Rosen thinks it’s a shame that more American Jews do not know about the Jewish Confederate, even with Benjamin’s support for slavery.

“He was the most successful Jewish figure in American politics until [Louis] Brandeis,” Rosen said.

“If there were a statue, I would defend it,” he added. “Maybe I’ll build a statue, now that you’ve called me.”