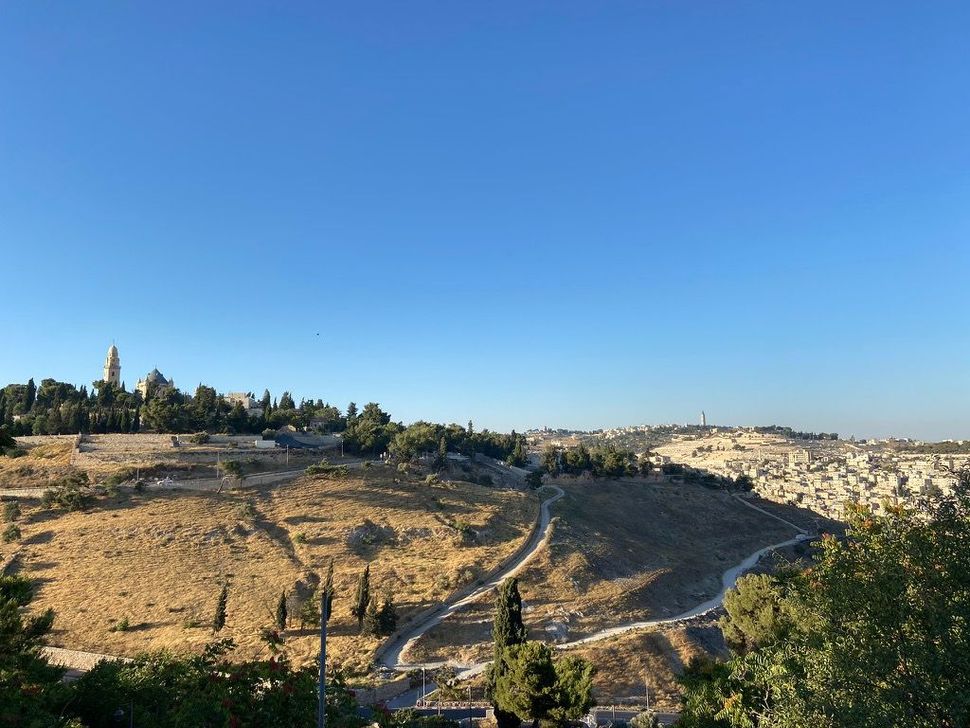 Opponents have panned the Jerusalem cable car proposal as a costly eyesore that will ruin the holy city’s historic landscape. Image by Ilan Ben Zion

Looking east from atop Bible Hill in Jerusalem, the Old City walls, Mount Zion and the Mount of Olives seem like a timeless scene. On a clear day the mountains in neighboring Jordan peek through the desert haze in a ruddy streak across the horizon. That view may soon be accompanied by monumental steel pylons and cables and a procession of dangling gondolas.

Israel’s Supreme Court heard a battery of four petitions on Monday, June 29 seeking to scuttle a contentious project to build an aerial tramway through the heart of historic Jerusalem to facilitate access to tourism and holy sites.

The project proposes linking Jerusalem’s old train station complex and the Old City’s Dung Gate with a roughly mile-long suspended tramway line. Gondola cars strung along seven-story high steel towers would be able to ferry thousands of visitors each hour to the Western Wall in a matter of minutes. The proposed route would cross the Hinnom Valley, run alongside the city’s iconic Ottoman-era walls and over the flashpoint Palestinian neighborhood of Silwan. 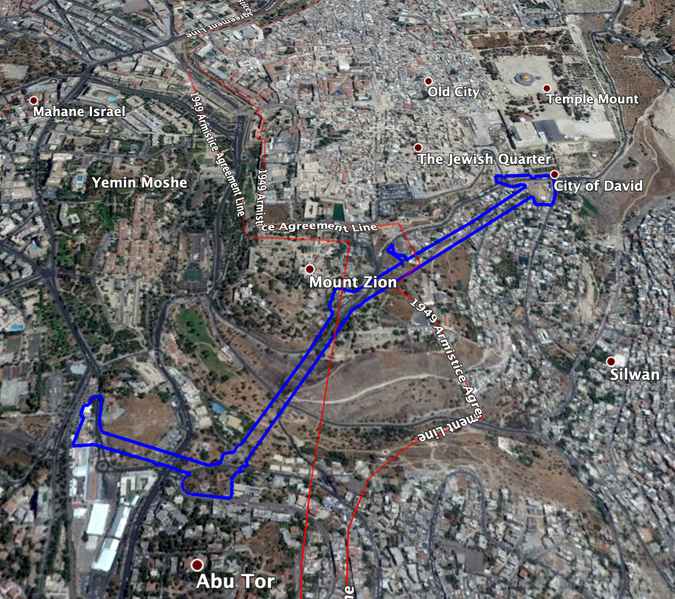 Screen shot from Google Earth showing the route of the proposed tramway/cable car.

Opponents have panned the Jerusalem cable car proposal as a costly eyesore that will ruin the holy city’s historic landscape. Last year, 30 leading international architects wrote a letter to Prime Minister Benjamin Netanyahu arguing that “the choice of a cable car is not appropriate for ancient cities with a skyline preserved for hundreds or thousands of years.”

“Cities like Rome and Athens with millions of visitors a year did not build a cable car. Jerusalem’s ancient landscape is a precious heritage to all of humankind. Its religious and cultural values must not be overruled by short-term interests,” wrote the authors, who included Moshe Safdie, Santiago Calatrava, Thom Mayne and Peter Eisenman.

But last year, Israel’s placeholder government rejected all petitions and gave the green light for the estimated 200 million shekel ($58 million) undertaking. Construction is projected to take up to three years to complete.

The Tourism Ministry, which is spearheading the project along with the Jerusalem Development Authority, argues that the cable car will provide speedy transport for the city’s growing influx of tourists and bypass the Old City’s tangled and congested roads.

The Western Wall is currently accessible by only two public bus lines and by shuttles, all of which arrive by a single-lane road running on the steep slopes abutting the city walls.

A key actor pushing for the cable car’s implementation is Elad, a Israeli organization that runs the City of David excavations and tourist site in the Silwan neighborhood at the base of Jerusalem’s Temple Mount. The group also helps settle Jewish families in Arab neighborhoods, including Silwan. The proposed terminus for the cable car will deposit visitors next to the entrance to the City of David visitors center.

A day before the court hearing, the Tourism Ministry –now headed by freshman Blue and White party lawmaker Asaf Zamir – issued a statement saying that it would stand by its predecessor’s decision and follow through with the project’s construction, saying the pros outweigh the cons.

“The ministry doesn’t downplay the claims raised by various bodies and is aware of the sensitivities raised by building it, but the public interest outweighs them,” the ministry said in a statement.

Critics of the plan object to its execution for reasons as varied as the opponents themselves. Environmentalists, archaeologists, architects, Palestinians and Karaite Jews are all calling on the Supreme Court to freeze construction before it gets underway. Monday’s court hearing on the issue stretched five hours. It remains unclear when the judges will hand down their decision.

Archaeologists and architects cringe at the damage the cable car line will wreak upon Jerusalem’s historic landscape. The course planned for the line will run over the Hinnom Valley – site of Jewish burials dating back to the time of the first temple in Jerusalem, over 2500 years ago – and through some of the oldest parts of the ancient city.

Led by Emek Shaveh, an organization against the politicization of archaeology, the archaeologists and architects petitioning the court say that if it goes forward, “it will be an environmental and transportation disaster and sorrow for generations.”

“We are sorry that we had to go to court to prevent such a plan,” said Yonathan Mizrachi, director of Emek Shaveh. But while the appellants wait for a decision on whether the tramway will go forward or not, he was optimistic. “We felt that the judges listened to our argument and to other arguments.”

The Palestinians in general object to the project because it runs over the Green Line into East Jerusalem, which they claim as part of a future independent state. Israel annexed East Jerusalem after the 1967 war, a move unrecognized by the international community.

Palestinian residents of the East Jerusalem neighborhood of Silwan said in their appeal to the court that the towers and cables that will soon loom over their homes will harm their quality of life and property. Shopkeepers from the Old City, who are already suffering from the coronavirus outbreak’s impact on tourism, say it will affect their livelihoods by diverting visitors away from the Old City’s markets.

Members of Israel’s small Karaite Jewish community say the cable car line will cause “unprecedented and irreversible damage” to the group’s cemetery directly below on the Hinnom Valley’s flanks. 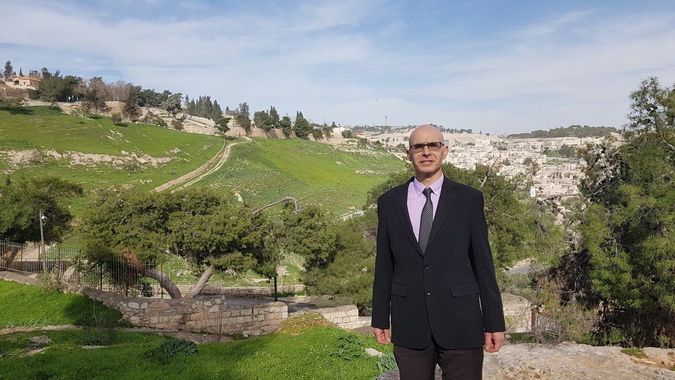 Shlomo Gaver, one of the Karaite leaders, in the cemetery in February of 2019. Image by Ilan Ben Zion

The Karaites, a Jewish sect that split from Rabbinic Judaism over the course of the 9th century CE, adhere to a more literal interpretation of the Bible and observe strict purity laws. In their appeal to the court, the community, which numbers around 40,000 in Israel, said that if the gondolas pass above the graveyard, “the community cannot make use of it, cannot enter it, and cannot bury the dead therein.”

Shlomo Gaver, director of the Universal Karaite Judaism organization based in Ramle, said he was optimistic after the judges had heard the community’s arguments in Monday’s hearing.

“We hope that the court will prevent the serious damage to the cemetery and to the Karaite Jewish community,” he said.