Are Jews ‘indigenous’ to Israel? One rabbi said ‘no’ on Twitter – and went viral. 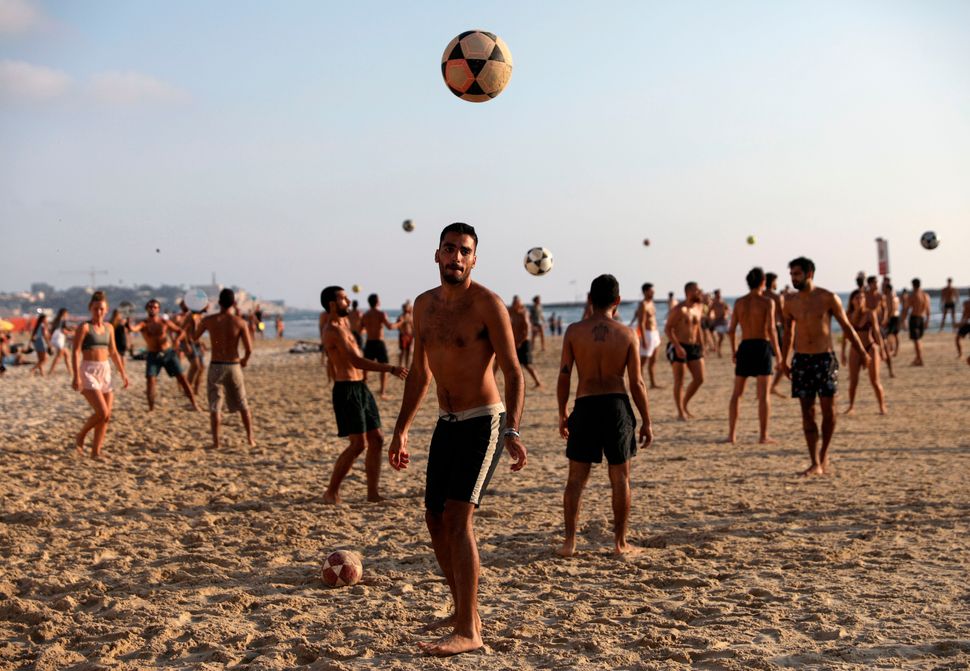 Israelis playing volleyball on the beach in Tel Aviv, July 7, 2020. Image by Getty

A New York rabbi tweeted on Wednesday that Jews cannot be considered indigenous in any land, prompting a debate on Twitter over the meaning of indigenous identity and whether Jews can claim it.

His tweet hit a nerve among Jews, some of whom tie their connection to Israel to extensive historical evidence of continuous Jewish settlement of the land for thousands of years – but who many be uncomfortable using a term usually reserved for people native to a land that was colonized by European empires, and who are now minorities that struggle for political representation in those countries.

“Let me say this as plainly as possible: Jews are not an indigenous people,” wrote Rabbi Andrue Kahn, an assistant rabbi at Temple Emanu-El in Manhattan. “It is appropriative to make use of this word when referring to our relationship to the land of Israel, and it undermines the difficult work being done to fix the ongoing oppression of indigenous peoples.”

Kahn’s tweet received nearly 10,000 likes and hundreds of comments, provoking derision, praise and interested debate. Some readers agreed, saying that Jews – especially those descended from Eastern Europeans – are too far removed from ancestral communities in the Land of Israel to be considered “indigenous” there today.

Others disagreed strongly, saying that Jews are indigenous by virtue their historical and cultural ties to ancient Jewish societies in what is now Israel. One poster even suggested Kahn’s comments are anti-Semitic.

Kahn declined to respond to questions from the Forward.

There is no official definition of an indigenous group, according to the United Nations. But the U.N.’s Permanent Forum on Indigenous Issues has a list of criteria for identifying indigenous groups.

An indigenous people, first of all, self-identifies as such. They may also have historical continuity with pre-colonial societies; distinct culture, language and beliefs; and be intent on maintaining their ancestral environments.

By these criteria, some have argued, Jews should be considered indigenous to Israel.

Tema Smith, who has written for the Forward, suggested that arguing over who in Israel is indigenous is pointless, because the term was meant to empower “indigenous peoples still living on land that has been colonized and fighting for sovereignty.”

But nonetheless, the concept of Jewish indigenous ties to Israel is frequently invoked and debated within the context of the conflict over the land that the Israeli government controls.

Jewish communities have inhabited Israel for more than 3,000 years, claims that are only disputed by anti-Semitic conspiracy theorists and some Palestinian leaders.

But the establishment of a Jewish state in Israel – which was established there, and not in other available territories like Uganda, because of Jews’ historic and religious ties to the land – also led to Palestinians being forced out of their homes during the state’s founding, and then living under an often repressive military occupation in the West Bank.

“Evaluated independently from Zionism, Judaism and Jewish peoplehood meet many of the criteria for being indigenous,” David Mevorach Seidenberg, an early proponent of egalitarian Hasidic Judaism, wrote in an essay for Tikkun in June. “Evaluated independently from Judaism and Jewish peoplehood and historical context, Zionism is barely distinguishable from settler colonialism.”

Palestinian groups say that they have an ancestral connection to the land Israel is located in that makes them an indigenous group as well. In August 2018, several Palestinian groups attended a summit of Native peoples hosted by the indigenous activist group Red Nation in Albuquerque, N.M. In a statement, those groups compared the displacement of Native Americans by European settlers to the displacement of Palestinians after the 1948 War of Independence in Israel.

The International Work Group for Indigenous Affairs, however, says that while there are Palestinian groups that are indigenous, such as the Bedouin people, not all Palestinians are indigenous.

“We accept that there are two indigenous peoples that both of them have rights,” Dani Dayan, Israel’s Consul General in New York, said in a recent Zoom talk. “The moment the Palestinians will come to the fact that history created two indigenous peoples, then the peace process will start.”

Five Yiddish comedians walk into a bar… Have you heard that one? Join Forverts editor Rukhl Schaechter as she talks to contemporary stars of Yiddish comedy and mavens of Yiddish humor. Don’t worry — the jokes will be fresh. Register for Zoom here.

Yet the Israeli government does not consider Bedouin people to be an indigenous group, and they face frequent demolitions of their villages throughout the Negev desert.

Kahn, for his part, wrote on Twitter that he does not consider Palestinians to be indigenous to Israel.

Palestinians, I think, are more a post Pan Arab group that would have (should have) had their own country akin to Lebanon, Syria, etc. And the indigenous people in this equation would have been the Druze and the Bedouin. 2/

For many commenters, however, the debate came down to whether they feel that their Jewishness makes them a “native” in Israel – as opposed to someone connected to a religion and culture with its roots in that land. Tasha Kaminsky, a nonprofit fundraiser and the cofounder of a Jewish community center in St. Louis, Mo., jokingly wrote that, if anything, she felt “vaguely indigenous to Florida.”

yeah this never sat well with me at all. it makes me feel creepy icky. i’m not indigenous to the levant. one of my ancestors a very long time ago probably was but who can even prove that. i’m not returning to my native land when i go to israel.

Are Jews ‘indigenous’ to Israel? One rabbi said ‘no’ on Twitter – and went viral.