In a live-streamed conversation with prominent Conservative leader Rabbi David Wolpe, activist and basketball player Stephen Jackson walked back some of his inflammatory comments and asserted his love for Jewish people. He vowed to speak out against antisemitic rhetoric when he encounters it in the future.

The conversation, which was viewed live on Instagram by about 2,500 people and was not formally recorded, may have left some wanting, as Jackson deflected Wolpe’s overture to disavow the notoriously anti-Semitic Nation of Islam leader Louis Farrakhan.

However, Jackson did express regret for comments he made on Instagram on Wednesday, that as late as Wednesday night he had stood by. Defending NFL player DeSean Jackson from the backlash he received over a post that appeared to quote Hitler, Stephen Jackson (no relation) invoked the anti-Semitic canard that the Rothschild family “owns all the banks.” 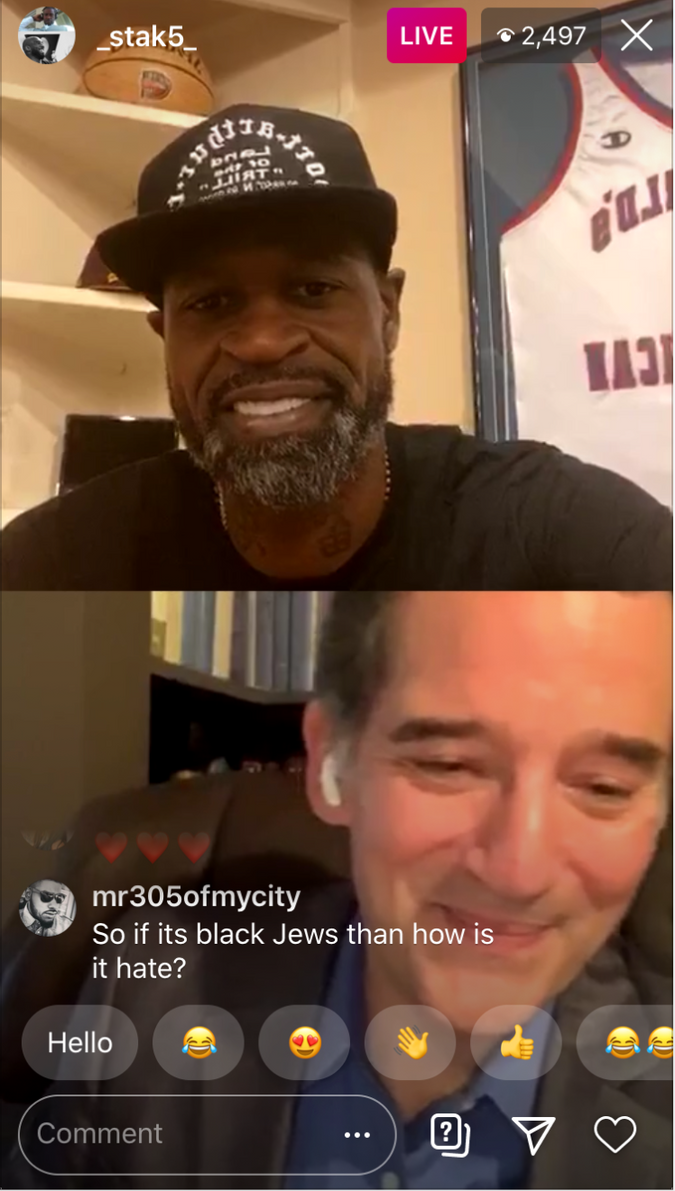 “Even with the Rothschilds, I hate saying that,” Jackson told Wolpe, “because that’s the same type of stereotype as, when you see a black person, [saying] he’s a gangsta.”

He added he had not even seen the DeSean Jackson post before coming to his defense.

A beloved if star-crossed NBA player who now co-hosts a popular podcast in his retirement, Jackson rose to the forefront of the civil rights movement following the police killing of George Floyd, a close friend Jackson called “Twin.”

In the weeks since, Jackson has posted hundreds of times about social justice issues, ranging from calls to prosecute the police who killed Breonna Taylor to education about the Black experience to encouragement to continue protesting. He has also courted controversy by posting quotes from Farrakhan, who has compared Jews to termites and calls them part of a global conspiracy.

The live-streamed conversation came together quickly via Josh Ahdoot, a Los Angeles-based entrepreneur who grew up attending services at Sinai Temple and is an old friend of Jackson’s. Their paths crossed when Ahdoot was CEO of a Black dating app. Jackson is a fellow entrepreneur with investments in the cannabis industry.

“I wanted to create a platform for them where they can have a needed uncomfortable conversation and educate one another,” Ahdoot said. “I’ve seen a lot of Jewish people attacking Black people and vice versa. Attacking isn’t the answer. I want people to listen, show compassion, and learn from one another.”

Wolpe streamed in front of a wall of bookshelves. Jackson spoke with jerseys from his playing days hanging behind him. The conversation lasted about 20 minutes.

The Thursday evening stream, which was announced nearly a full day in advance, contrasted with the spirited exchange between Jackson and a Jewish college student on Instagram Wednesday morning. That conversation produced the Rothschild comment but ended with Jackson conceding that he didn’t believe Jews were intentionally dividing the Black community.

Thursday’s conversation began with Wolpe asking Jackson to speak to his experience as a Black man and to misconceptions about the Black community he has had to fight against. Jackson discussed the systemic issues that lead to Black-on-Black crime, an issue he cares about but which he said is misdiagnosed as racial fallibility.

“The way people look at us, comes from our circumstances,” Jackson said. “It comes from growing up in poor areas. You have to become the man of the house at 12 or 13 years old. When you make a mistake you’re labeled a thug. But you don’t have many options.”

Wolpe admitted that the Jewish community, himself included, could do better to support the Black community. He said he had had to have tough conversations with his own congregants when they espoused racist ideology.

“But every community has its own sensitivities based on its own history,” Wolpe continued, turning the discussion to the Holocaust. “I know people who still have tattoos on their arms.” Had Jews possessed all the power that was ascribed to them, the Holocaust never would have happened, Wolpe said. Jackson agreed.

“I know that we both struggle with the question of power,” Wolpe went on. “Because if the African American community had more power in voting, in wealth, then these things would change. And the Jewish community has learned how important power is so that you don’t get beaten down in the world.”

So when DeSean Jackson alluded to Hitler, and when Stephen Jackson invoked the Rothschild family, Wolpe said, “my own community reacts with hurt, and sometimes with fear.”

“I understand the hurt,” Jackson replied. “That’s why I was comfortable initiating an apology. Your hurt and our hurt is no different.”

Jackson shared the story of how his basketball career began when a Jewish teenager discovered him. The teen fearlessly approached Jackson on a court where drugs were being dealt and invited Jackson to join his traveling basetball team — even volunteering to drive him the hour to and from practice and cover Jackson’s expenses on road trips. That teenager, Josh Pastner, is now the head basketball coach of Georgia Tech, and a lifelong friend of Jackson.

“Josh is a Jewish guy that I love with the bottom of my soul,” Jackson concluded. “There’s no way I could have hate for any Jewish person in my life. And I hate that I have to explain that.”

When Wolpe brought up Farrakhan, he acknowledged it would be “a hard thing.”

“I know that if a Jewish leader made a racist comment, Jews and African Americans would come down on him and they should,” Wolpe said. “We hear minister Farrakhan talk about ‘satanic Jews,’ I think if anyone would talk about satanic Blacks, people would go insane, and they should.”

But Jackson demurred, clarifying his criticism of NFL owners, some of whom are Jewish, and not addressing Farrakhan directly.