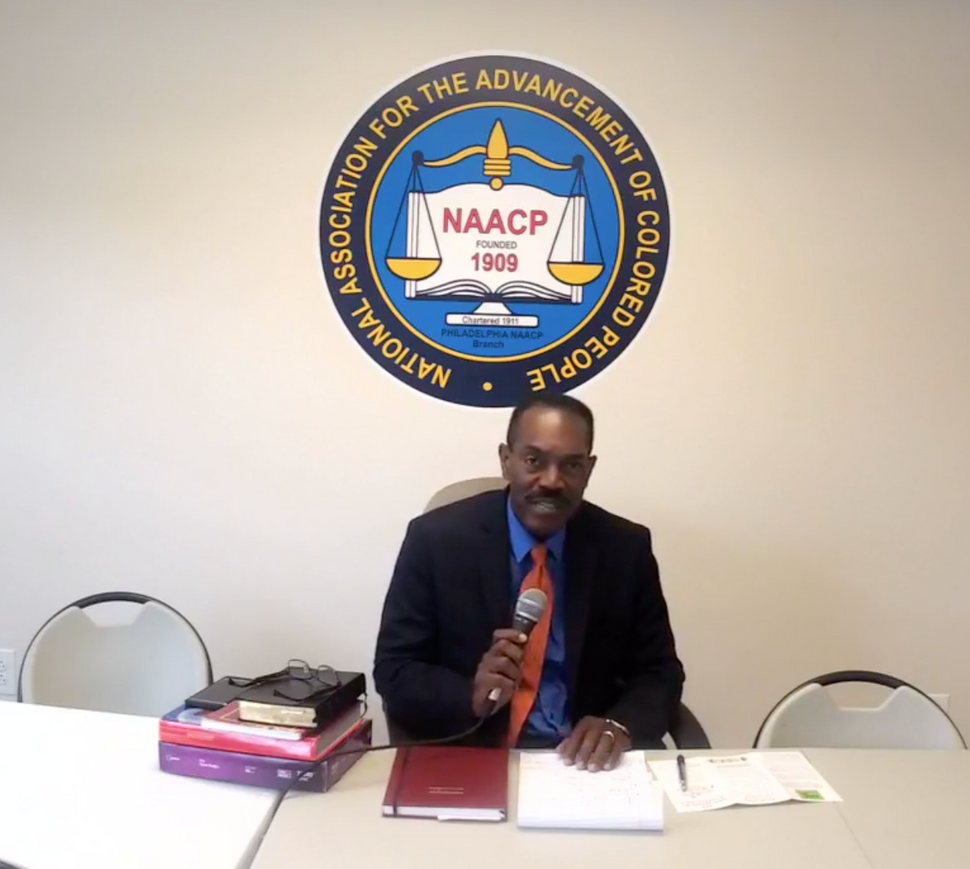 The Philadelphia president of the NACCP will not be resigning—at least for now.

Despite calls for the resignation of Rodney Muhammad for posting an anti-Semitic meme on Facebook, the national NAACP said it has decided with him to “meet with community leaders and faith leaders to open a dialogue” and to also launch “national conversations to further understanding.”

Meanwhile, the Facebook page of the mosque where Muhammed is minister is still filled with anti-Semitic posts.

“Those of you who say that you are Jews, I will not give you the honor of calling you a Jew; you are not a Jew! You’re So-Called [a Jew], you are Satan and it is my job now to pull the cover off of Satan so that every Muslim, when he sees Satan, [will/should] pick up a stone,” reads a recent post of Muhammed’s Mosque No. 12 in Philadelphia.

In its statement, the national NAACP did not address these additional posts. It said that when Muhammad posted the meme last Friday, he was unaware that it “has a history of anti-Semitic propaganda. Upon realizing his mistake, he immediately took down the post, as well as the associated caption. He also acknowledged and apologized for his error in judgment.”

The meme is a drawing of an anti-Semitic caricature – a smiling, bearded Jewish man wearing a yarmulke – rubbing his hands together while a large hand below him presses down on several people huddled together. Above it are color photos of rapper and actor Ice Cube, Philadelphia Eagles player DeSean Jackson and actor and television host Nick Cannon. All three men are prominent African Americans who have come under heavy criticism for recent anti-Semitic comments or sharing anti-Semitic social media posts. 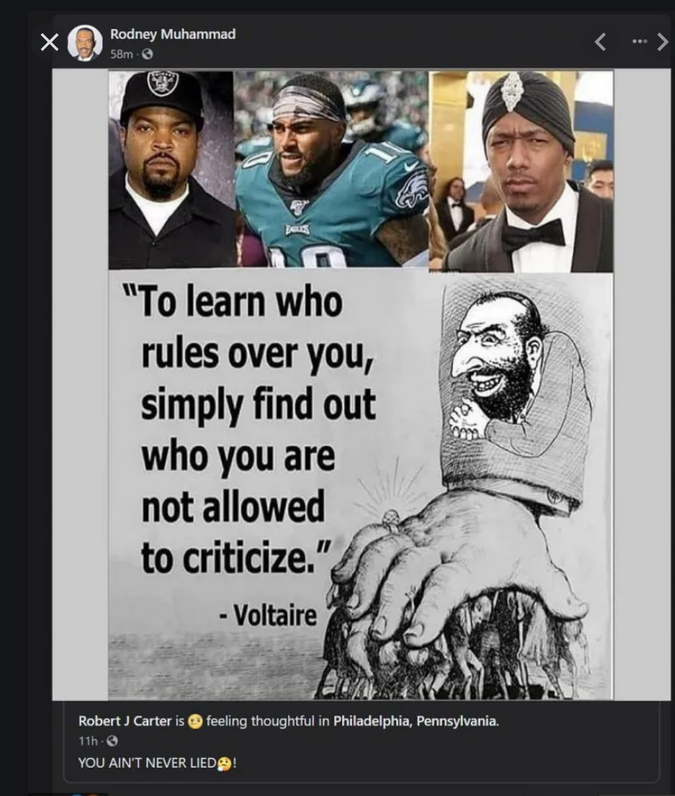 The cartoon also included the caption, “To learn who rules over you, simply find out who you are not allowed to criticize.” It was attributed to the French philosopher Voltaire, but it actually is said to have been uttered by a neo-Nazi white supremacist. The Anti-Defamation League said the drawing itself is the favorite anti-Semitic meme of white supremacists, who it said have created a nearly endless series of images and variants featuring what is called the “Happy Merchant.”

The Philadelphia Board of Rabbis is expected to issue a statement about Muhammad and the meme July 31. The group’s co-president, Rabbi Annie Lewis of Temple Beth Zion-Beth Israel in Philadelphia said she was would welcome the “strengthening of relationships and the forging of strong relationships,” but the outreach she is looking for first needs to be preceded by a, “strong condemnation and denunciation of anti-Semitism and all forms of hatred.”

Muhammad, 68, a minister of the Nation of Islam, worked with the organization’s leader, Minister Louis Farrakhan, in 1995 to organize the Million Man March. Farrakhan has made derogatory remarks about Jewish people over the years. He has called Jews “bloodsuckers.” And in a 2012 interview with Loyola University in Chicago, Muhammad criticized the Jewish community’s attacks on Farrakhan.

Many African American political and religious leaders have called for Muhammad’s resignation, including Pennsylvania Gov. Tom Wolf and State Sen. Anthony Williams (D-Philla), who said the Philadelphia chapter of the NAACP should remove Muhammad from office if he does not resign.

Asked his reaction to the national NAACP saying it will launch a “national conversation to further understanding,” Williams said: “I think someone in the Jewish community has to say if that is acceptable or not. I am not sure how an organization that was founded in part by Jews would feel about having such a conversation.” 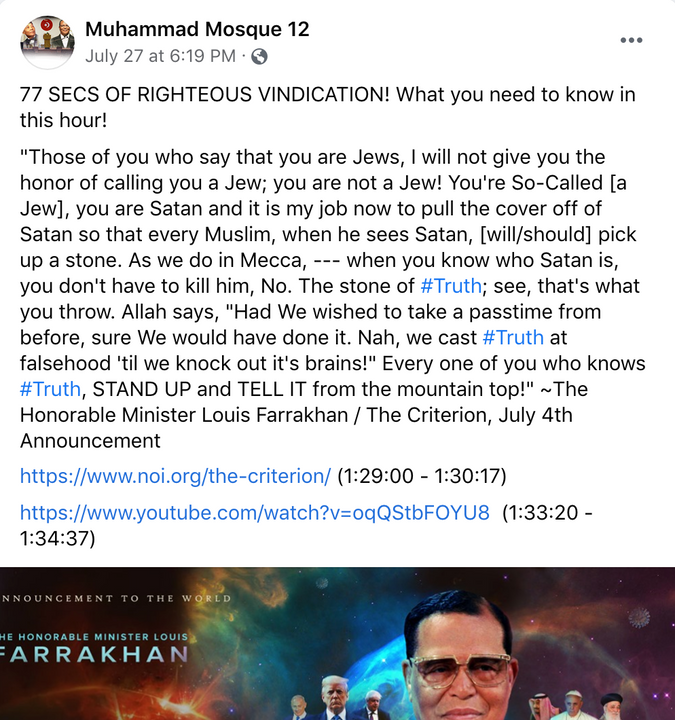 A screenshot of the Facebook page of Philadelphia’s Mosque No. 12, where Philadelphia NAACP president Rodney Muhammed is a minister. Image by Facebook

Asked if he has seen an apology from Muhammad, Williams replied: “I haven’t seen it. I don’t know that he has.”

Regarding the NAACP’s claim that Muhammad said he was unaware of the anti-Semitic nature of the meme, Williams scoffed.

“I can’t accept that a studied minister would not know anti-Semitic and racist images. And the image represents racism as well as anti-Semitism. It is hard for me to understand that it is not something that he would have understood.”

Imam Salaam Muhsin, an African American with the Community of Imam Warith Deen Mohammed, said he would support the idea of a national conversation “but you have to know who is invited. It can’t be run without other Muslim leaders. There are scholars of the holy Koran who are former members of the Nation of Islam, and if you are talking about racial harmony and Muslims, you want somebody who is going to bring to the table the book itself (Koran). He cannot speak exclusively for Muslims because his school of thought is from the Nation of Islam.”

David Hyman, former president of the Philadelphia chapter of the American Jewish Committee, said he was “not totally surprised” to see Muhammad’s anti-Semitic meme “because he is affiliated with the Nation of Islam and that is not out of character for that organization.”

Asked if he wanted to see Muhammad resign, Hyman said, “I would welcome a transition. I would be pleased if the local members made another selection. I think it’s overdue for him to step down. Philadelphia has had a history – back to the ‘60s and ‘70s – of strong ties with the Jewish community.”

He noted that the Jewish Federation of Greater Philadelphia convened a press conference Tuesday to address this issue and that “many African American leaders attended— the head of the state NAACP, two state senators, a city councilwoman, a labor leader —all African Americans standing with the organized Jewish community expressing their outrage. So as bad as the situation is, I am uplifted by seeing our community standing together to express its outrage against hate.”

Marcia Bronstein, the AJC’s regional director, said her organization and the Jewish Federation have both called for Muhammad’s ouster and she said he has yet to apologize.

In his first comment on July 27— one day after he posted the meme —Muhammad said simply that it was “never my intention to offend anyone.” On July 30, he issued a statement saying he removed the meme “after learning of its significance.”

“I do regret the insult, pain and offense it caused to all, particularly those of the Jewish community by this unfortunate episode. I AM NOT NOR ARE ANY OF OUR MEMBERS ANTISEMITIC!”

He then noted that he has worked with the city’s Jewish mayor and that the NAACP “strongly condemns offensive language or imagery, hate speech and anti-Semitism. Our aim now is to engage thoughtful, meaningful, and we hope productive dialogue between our communities.”

But Bronstein noted that Muhammad is the minister of Mosque No. 12 and that its website “regularly posts offensive, anti-Semitic material regularly. If he claims to stand with members of the Jewish faith and the fight for social justice, he needs to take responsibility for the items that are posted on his mosque’s website. They are very hurtful. He needs to get it off his website in order to be a credible partner.”