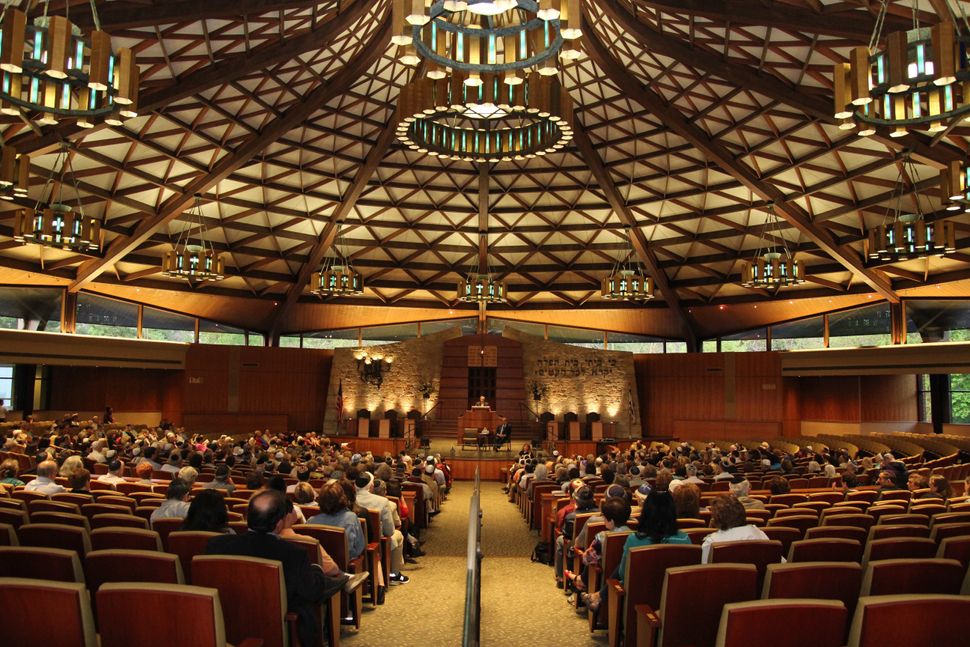 Editor’s note: In observance of Martin Luther King Jr. Day, the Forward is resurfacing some of our recent coverage related to the Black-Jewish experience and racial justice. This article originally appeared in August, 2020.

Half of the students in the Zoom class were from Liberty Grace Church of God, a Black Baptist church in Baltimore. The other half attended the Jewish day school affiliated with Beth Tfiloh Congregation, in the Baltimore suburbs.

One teacher was Black and Christian. The other was white and Jewish.

Over a week in July, they gathered together on Zoom to plan an iPad-guided historical walking tour of the city’s Forest Park section, which in the 1950s and early 1960s was integrated — Black and Jewish.

And one day, they hosted two guests who were children in the neighborhood at that time. One of those people, now the executive director of the synagogue, remembered the amusement park she used to love going to during the summer, Gwynn Oak Park. The other guest, a Black congregant of Liberty Grace, added an important detail: The park was whites only.

“It was one of those moments you’ll remember your whole life,” said Susan Holzman Biggs, one of the two teachers, who is also an administrator at the Beth Tfiloh school, in an interview. “Hearing those kinds of stories firsthand from the people who lived them was important for everybody, the adults and the kids.”

Since the police killing in May of George Floyd in Minneapolis, the oppression of Black Americans has dominated the national conversation, and many white American Jews are looking at their community’s role and responsibilities. These two Baltimore congregations, capitalizing on a relationship that began five years ago, are remembering the community African Americans and Jews once made, which Jews left.

‘No different than the knee on George Floyd’s neck’

The reverend had come with a proposition. He’d learned that the abandoned bowling alley in his church’s basement—closed down by the previous congregation that owned the building—had once been a center of communal life when the Forest Park and adjacent Ashburton neighborhoods were integrated. Did Beth Tfiloh want to partner on rebuilding it?

“I walked in to tell him, we need your help. This was the home of your people,” Rev. King said in an interview. “And I want my people to have a standard of living as a community, equal to, if not greater, than what you have. That’s what started this process.” 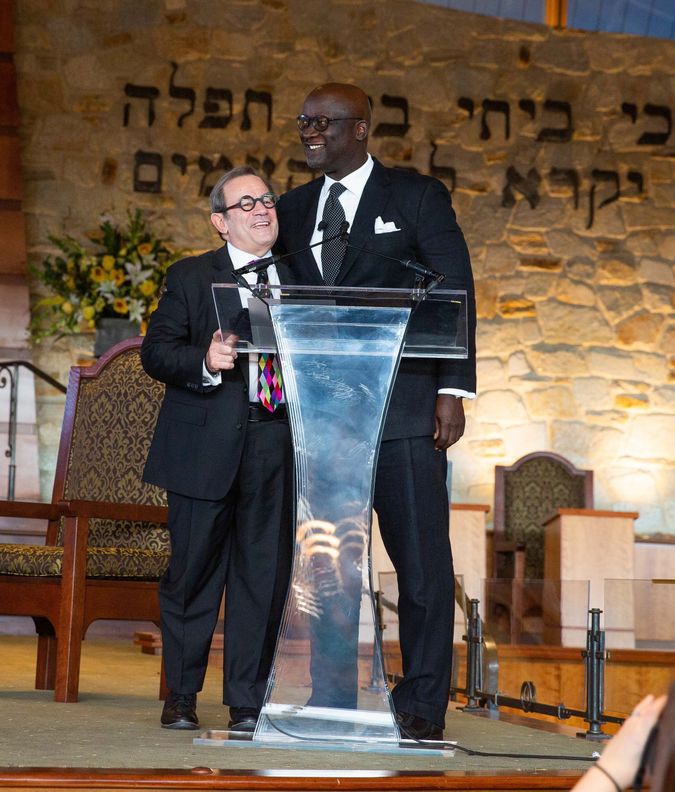 The meeting led to a friendship between the two faith leaders, and their flocks.

Liberty Grace is a non-denominational church with 250 members, founded in the living room of the elder King’s mother — a rare woman-led church in Baltimore. Beth Tfiloh is a large Modern Orthodox synagogue whose congregants are primarily observant Jews.

Yet Rev. King said he and Wohlberg have been amazed by the similarities between them. After long careers — Wohlberg’s 40 years at Beth Tfiloh, Rev. King’s 25 at Liberty Grace — they felt confident enough to try a unique, unprecedented partnership in Baltimore. (Rev. King also worked full-time as a healthcare executive in the federal government.) They both like fast cars, and good jokes.

Since King and Wohlberg met, Beth Tfiloh has hosted Liberty Grace’s children’s choir to sing with the synagogue’s own children’s choir, and the two congregations have participated in several “culinary exchanges,” where women from the two communities cook together (in the synagogue’s kosher kitchen) and then serve the food for kiddush luncheon the following Saturday. Each Shabbat before Martin Luther King, Jr. Day, Liberty Grace’s congregation comes to Beth Tfiloh, where Rev. King gives a sermon. 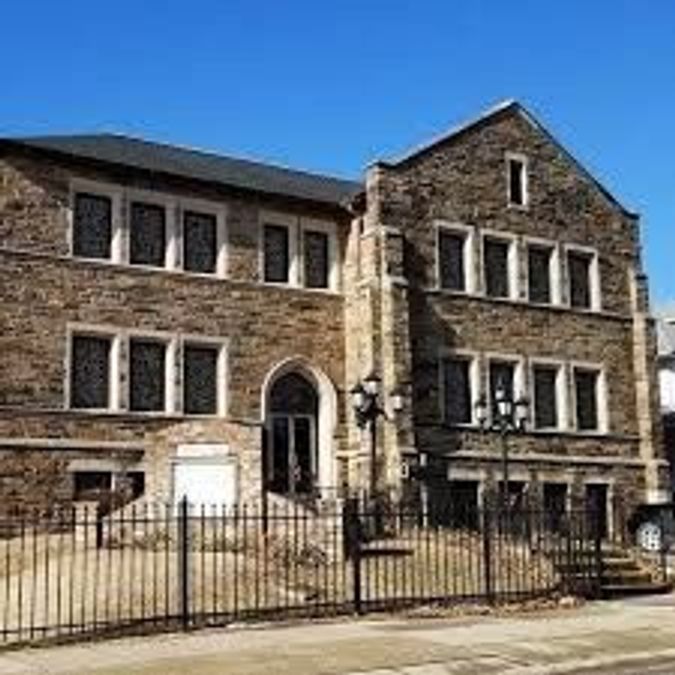 The deepening relationship between Beth Tfiloh and Liberty Grace has also forced the Jewish congregation to face facts about poor Black life in Baltimore.

In one visit to the synagogue, Rev. King described how the public schools in his neighborhood do not have WiFi, crippling the learning abilities of the children. Wohlberg said his congregation was shocked.

“On the most simple and basic level, what chance does this seven-year-old Black kid have if their school doesn’t have WiFi?” Wohlberg said in an interview. “And people could relate to that — that was no different than the knee on George Floyd’s neck.”

Starting in 1934, with the creation of the Federal Housing Administration during the New Deal, white developers used redlining to keep both Jews and Black people out of many neighborhoods. Even Jewish developers who were major philanthropists in their communities upheld the restrictive covenants.

Jewish neighborhoods, beginning with western Baltimore’s one-time Garment District, were largely graded as undesirable on redlining maps from the time, but Black neighborhoods were considered worse.

For that reason, as first wealthier German Jews, then Eastern European Jews, moved northwest out of Baltimore’s center, realtors would rent the neighborhoods they left only to Black people, creating the conditions for ghettos that still exist.

“Once Jews moved out, the assumption was that realtors would only show the properties to African-Americans,” said Paige Glotzer, an assistant professor of history at the University of Wisconsin-Madison and the author of “How the Suburbs Were Segregated.” “It was gonna be Jewish, then it was gonna be African-American.”

That meant that Jewish communities were at the forefront of white flight among white ethnicities in various cities, including Baltimore, Glotzer said.

Forest Park and Ashburton fell in the middle, in time and space, of this northwestern trail to the suburbs. But as the Black population grew in the neighborhood, the Jewish population sought its own bubble in Pikesville, outside Baltimore city. 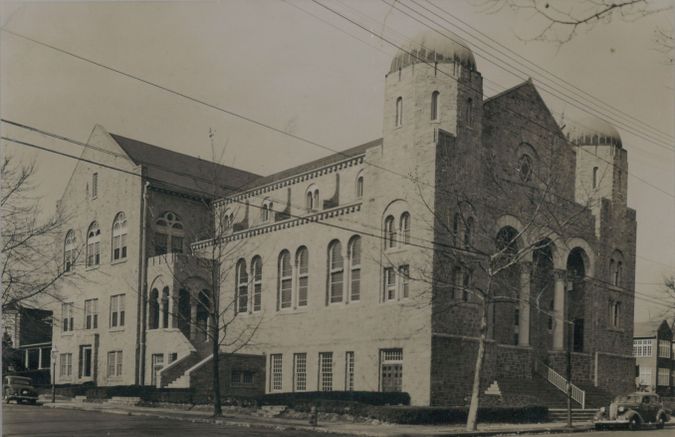 In 1966, Beth Tfiloh moved its synagogue — established in Forest Park in the early 1920s — to Pikesville, severing the Jewish community’s last connection to the city neighborhood. Parts of the area remained middle class, while others declined.

Wohlberg said his congregation is made up of people who themselves joined Beth Tfiloh in Pikesville, as well as the children they raised in the suburbs.

“This Jewish knowledge of what was going on is very, very much real,” Wohlberg said. “They made the history.”

The areas are now divided by Northern Parkway. North of the parkway, the average life expectancy is about 82 years. If you’re born to the south of the road, it drops to 68.

A walk in the neighborhood

The tour, and the iPad app it is built on, is the brainchild of Terris King II, the son of Liberty Grace’s pastor. He’s a kindergarten teacher who moved home during the pandemic after a decade abroad teaching at the Shanghai American School.

He is calling the project Temple X: The “Temple” represents inter-religious cooperation, and the “X” is for experiential learning.

The Forest Park/Ashburton walking tour tells the fictional story of two friends, a white and Jewish girl and a Black and Christian girl, as they show the viewer what their lives were like in their neighborhood.

By pointing an iPad camera at stickers with QR codes pasted on or near historic buildings, the children on the tour will be able to see and hear speakers and images from the past in “augmented reality,” which uses the iPad screen to, for example, show archival photographs of a former synagogue over the place it used to be. King II said that the program has a safety team to accompany the families.

The elementary school students from Liberty Grace and Beth Tfiloh’s Dahan Community School — in third through sixth grades — who participated in the Zoom classes helped set the route for the tour (remotely, on Google Maps) after learning about the neighborhood’s history with King II and Holzman Biggs, though they have yet to go on the tour themselves. 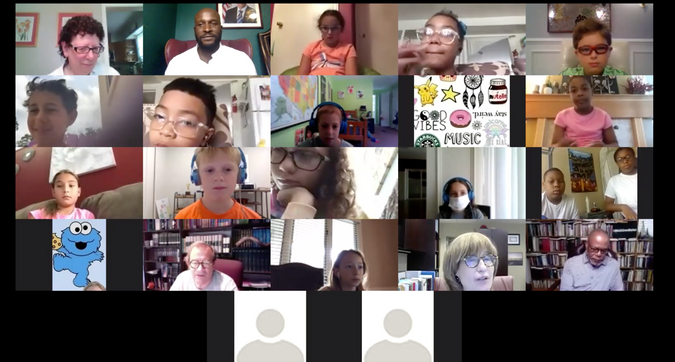 One of the Zoom classes with Liberty Grace and Beth Tfiloh children. Susan Holzmann Biggs and Terris King II are in the top left. Image by Courtesy Beth Tfiloh Congregation

Teaching the shared history to the children is the first step to bringing Baltimore’s Black and Jewish communities closer together, as they were 70 years ago, King II said.

Wohlberg said his community has enthusiastically embraced the walking tour project as a way to further their relationship with Liberty Grace, and engaging with the fraught history of the Jewish community’s movement from Baltimore’s center to its perimeter.

“This is not a matter of putting up a sign: Black Lives Matter,” said Wohlberg. “It’s a matter of learning who we are.”

The tour app, in technical development for more than a month, is launching on August 18, with an in-person tour for both communities. A screenshot from the walking tour app in development. Image by Courtesy of Terris King II

The Beth Tfiloh community has provided funding and Holzman’s time for the Temple X project, and has put Liberty Grace in touch with Jewish foundations to begin discussions about further funding.

Beth Tfiloh has also partnered with Towson University and Liberty Grace to begin rebuilding the bowling alley where Black people and Jews rolled side by side, Rev. King said.

This walking tour is the first in a global project, King II said, to create a platform for communities around the world to make their own tours and engage the students that are simply too young to do all of their learning via Zoom.

“We want to destroy the digital divide, but also the cultural divide between our communities,” he said. “The reason we’re starting here is that there’s a lot of turmoil between the Black and white Jewish community.”

While the older elementary students did not shy away from asking about race in the past — Did you attend the same schools? Could you go to the same hospitals? — the walking tour they helped make will not feature the Jewish community’s exit or its aftermath, since it is meant as the first foray for younger students into this fraught history.

But King II said he has been impressed with the Jewish community’s level of engagement in actually creating the app.