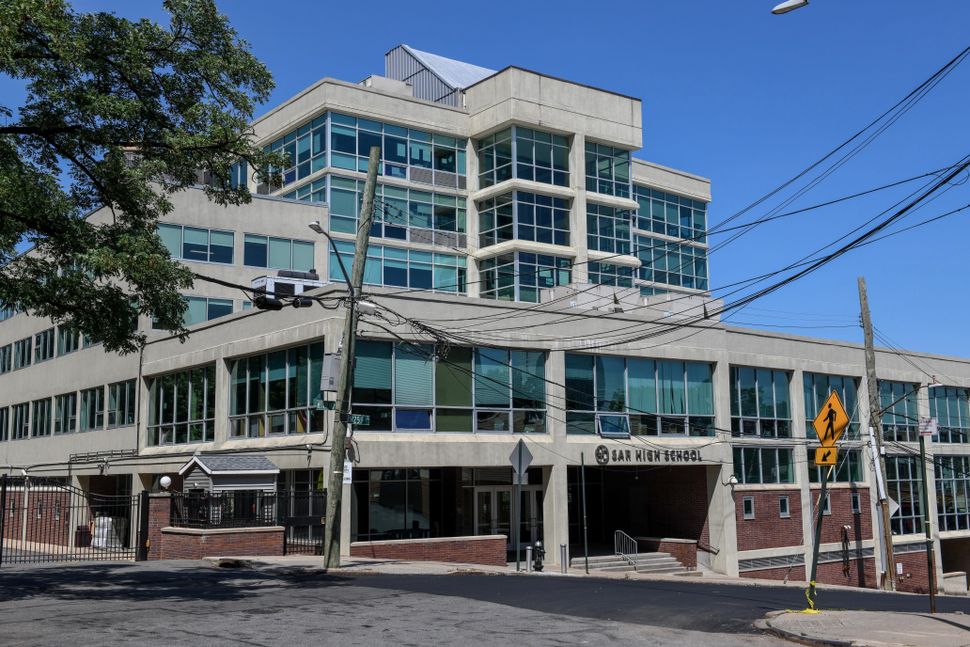 In the two months since George Floyd was killed by Minneapolis police, American Jewish day schools have begun to rethink how they teach students about the brutal legacy of American racism.

Among the subjects they’ll have to examine? Their own history.

As the day school movement has expanded, it’s created a deep passion about the need for institutions that, in a secularized America, affirm and enrich Jewish identity. For day school communities, it’s impossible to imagine that the educational model that dominated the first half of the 20th century — in which Jewish students attended public schools and received supplemental Jewish education — might be a sufficient incubator of religious and cultural character.

But the origins of some day schools, particularly those founded in and after the 1970s, are connected to a dark narrative of 20th century American history: That of the backlash among white families against the racial integration of public schools. And as day schools reconsider how they teach students about the realities of American racism, they face questions about how those realities intersect with their own institutional heritage.

“The Jewish day school movement was founded when the U.S. public schools integrated,” said Ilana Kaufman, executive director of the Jews of Color Initiative, in a June 21 conversation hosted by Temple Emanuel’s Streicker Center, “because there was white flight from U.S. public schools.”

The actual story, say historians, is a little more complicated. (Kaufman did not respond to requests for comment.) As European immigration expanded the American Jewish population around the turn of the 19th century, said Jonathan Sarna, a professor of Jewish history at Brandeis University, American Jews developed the sense “that the public school was crucial to the making of Americans, that it was truly un-American not to send your children to public school.” For decades, attending public school was something Jewish immigrants and their children saw as a matter of principle. “Jews were very proud that in America the schools accepted Jews, there were no quotas, everybody studied together,” Sarna said.

In the late interwar period, that began to change. “The day school movement starts in the 20s and the 30s,” said Jonathan Krasner, a Brandeis professor currently writing a history of Jewish day schools. That, according to Krasner, was the first of several discrete periods in the evolution of the day school system. Next came “a really big push in the post-war era,” primarily from the Orthodox community. “There were a lot of refugees that came here just before or after the war, and they didn’t have the same allegiance to public schools,” Krasner said. “They were influenced more by things like the Holocaust and the creation of the state of Israel,” events that, for some, prompted a renewed interest in ensuring that new generations would cultivate a strong Jewish identity.

But the day school movement didn’t blossom until the 1960s and 70s, an era that proved particularly fruitful for community schools, non-Orthodox institutions catering to students who, while discontented with the public school system, were unlikely to attend rigorously religious alternatives.

What lay behind that discontent? One major and frequently forgotten factor, Sarna said, was the mass flight of Evangelicals into private schools after Supreme Court decisions in 1962 and 1963 effectively banned prayer from public schools. That exodus, Sarna said, dealt a serious blow to the Jewish belief in public schools: How could they truly be said to be essential to the American character, if so many of their students were abandoning them?

At the same time, much of American Jewry was on the economic ascent, entering class ranks in which private schools were increasingly considered the norm. “The fear was, if we don’t have Jewish schools, Jews will simply go to those private schools run by Protestants,” Sarna said. And, in the late ’60s, the country was transfixed by incidents like the Ocean Hill-Brownsville conflict, in which a predominantly Black school district in Brooklyn terminated the contracts of a number of white, Jewish teachers, drawing allegations of anti-Semitism and prompting a two-month-long teacher strike. “Those very, very well publicized incidents suggested to Jews that the public schools were no longer friendly to Jews,” Sarna said.

But in many communities — particularly urban ones, according to Krasner — the decisive moment for day schools came in the early 1970s, as the Supreme Court issued a series of decisions mandating that school districts use busing to integrate schools. (Brown v. Board of Education, the 1954 case establishing that school segregation was unconstitutional, didn’t address the de facto school segregation that resulted from Black and white people living in largely different neighborhoods.) The impact of those decisions was particularly visible in Los Angeles, said Sara Smith, Assistant Dean at the Graduate Center for Jewish Education of American Jewish University.

“There was really a sense — community rabbis certainly spoke about this — that on the one hand we as Jews should be supporting integration, because that’s a value that we hold,” Smith said. But, she said, there was “a real fear and paranoia from parents who didn’t want to send their kids to be bused across the city to go to schools that were going to be populated by non-whites.” Between 1966 and 1980, Smith wrote in her 2017 NYU doctoral dissertation, the number of white students enrolled in Los Angeles’ public school system decreased by 269,373. That reduction was accompanied by a rise in the number of local private schools. Jewish students, and Jewish schools, were clearly identifiable participants in that change.

To date, Smith’s dissertation is the only intensive work of scholarship on the intersection between the desegregation of public schools and the rise of Jewish day schools. But Rivka Press Schwartz, a research fellow at the Shalom Hartman Institute of North America and associate principal at Riverdale’s SAR High School, is sure that the pattern Smith identified in L.A. was replicated across the country. “There is a great deal of evidence of people moving to the suburbs, pulling their kids out of public schools and putting them in private schools,” Schwartz said. “It is 100% true that Jewish parents, then and now, cared about their kids’ Jewish education, and sacrificed to afford their kids a meaningful Jewish education. But it can also be true that if your neighborhood public school was all of a sudden about to be subject to busing, then sending your kid to a Jewish school might appeal more.”

“We’re adults,” she said, “and more than one thing can be true at the same time.”

How should the day school system reckon with this history? First, said Krasner, it’s important to note the scale of the issue, which largely doesn’t involve Orthodox schools; the Orthodox “commitment to day schools,” he said, “is more fundamental than any change that took place within American society.” A 2013-2014 survey by the Avi Chai Foundation, Krasner said, suggested that about 13% of Jewish day school students in the U.S. attend non-Orthodox schools. A fair proportion of those schools were founded before the start of desegregation efforts, meaning that the number of schools whose history was genuinely informed by a rejection of desegregation may be comparatively small.

For those schools, what comes next? “The legacy is the legacy, and that’s the way that it happened. And, these institutions have done many great things for Jewish identity for many people,” Smith said. To meaningfully grapple with their history when it comes to race, she said, schools have to start “thinking about real intentional ways to build bonds that don’t just feel like service.” Too often, she said, day schools fail to place value on cultivating student relationships with those from other communities. In her view, it’s time for that value to become central to day school curriculums.

“What do we do with complicated, painful parts of our history?” Schwartz asked. While she’s worked to incorporate a more comprehensive education about structural racism into SAR’s curriculum, she’s long had the sense that turning the conversation to the origins of the day school system would be unproductive. “Pirkei Avot says, don’t say something that can’t be heard,” she said. “I did have the sense this was something that couldn’t be heard.”

But in the last three months, Schwartz said, those around her have suddenly become more interested in the issue of day school origins. So far, she said, discussions around that subject have been preliminary; the educators in her sphere, preoccupied with the difficult educational conditions imposed by the coronavirus pandemic, have yet to begin planning around whether and how to incorporate that history in their teaching. “There are certain things that make it hard for the Jewish community to come into this conversation,” she said. “It’s not just you’re racist, or you’re clueless, or you’re living out your lives as upper middle class white people. There genuinely are things that make it very difficult, which the people who want to make this conversation happen have to also think about.”

Smith says that as she wrote her dissertation, she spoke with the founders of several of the Los Angeles schools whose histories she was researching. They weren’t surprised by what she was uncovering, she said, but they also weren’t particularly interested in it. “I think people understood that these schools are able to exist and thrive because of busing, and that was just the way that it was,” she said. “Now I think we’re turning back, and trying to understand, ok, how did we get here?”