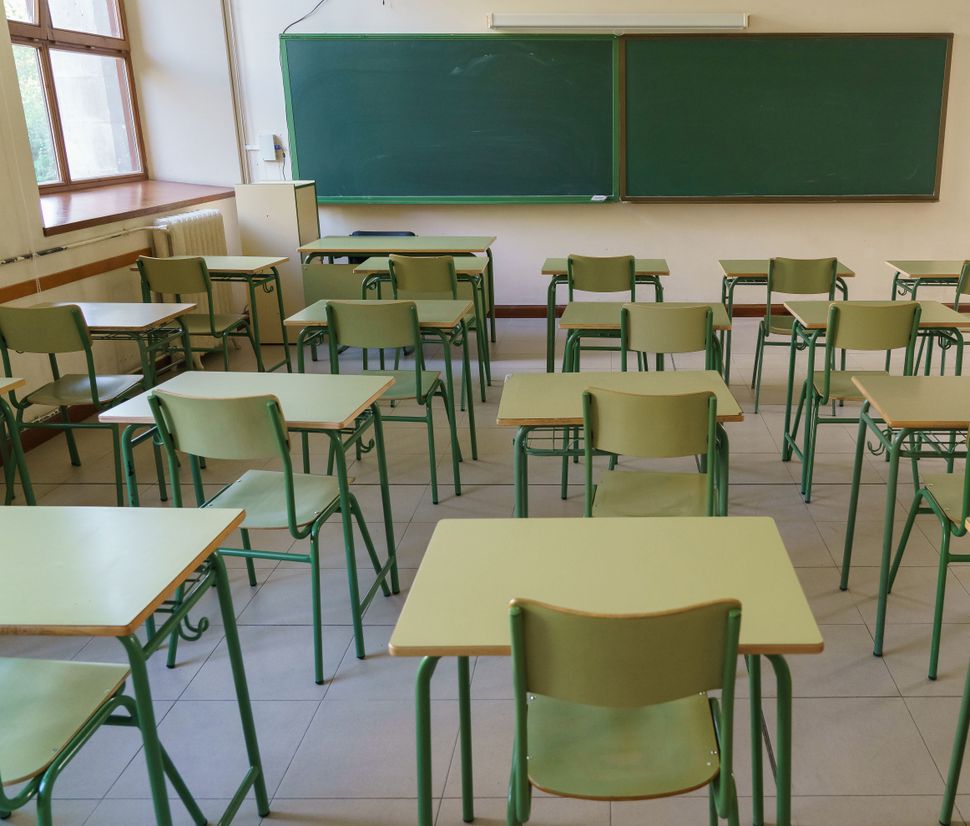 Editor’s note: In observance of Martin Luther King Jr. Day, the Forward is resurfacing some of our recent coverage related to the Black-Jewish experience and racial justice.

Barthelemy Atsin had his first encounter with the police when he was 13 years old: They pulled over as he walked down a street with friends, and subjected him to a body search.

That day was a turning point, the first of many times that Atsin, who is Black, would find himself in dangerous interactions with the police, despite having done nothing wrong. In college, four security officers burst into his dorm room while he was sleeping, wrongly accusing him of pulling an alarm. In Bloomberg-era Brooklyn, he was stopped and frisked in a park across the street from his apartment.

“I was even stopped by a police officer at SAR High School,” Atsin said.

Atsin, an art teacher at SAR, a Modern Orthodox pre-K through 12th grade school in Riverdale, N.Y., was speaking to nearly 300 SAR students gathered over Zoom for a crash course on American racism. As protests swept the United States in the wake of George Floyd’s death at the hands of Minneapolis police, it was one of many such events thrown together by American Jewish schools: Zoom seminars, reading groups, town halls and more. But underscoring the public conversations were more difficult, private ones, about the discreet challenges that Jewish schools face in confronting the current calls for racial justice, and the particular ways in which the schools’ institutional histories reflect the country’s long and brutal record of racial prejudice.

Some of the questions raised by current and former students and staff alike: How do you effectively teach a predominantly white student body about racism? The Jewish day school system runs from early education through high school, meaning many students never have an educational experience that reflects the real diversity of American society: How can you help students build relationships with peers of different backgrounds? How do you teach students to understand themselves to be both a part of a historically oppressed minority and, in America, beneficiaries of a social and political system built on racism?

And, perhaps most centrally: What version of American history do Jewish schools teach students, and why?

History curriculums across both public and private schools have long been criticized: On the left, for portraying American history as a single narrative with a clear arc toward progress, a take that often overlooks the complex iterations of American racism; and on the right, for presenting a too-cynical view of the country’s failures. And while many American Jewish schools make a point of celebrating the Jewish role in historical movements for equality — Rabbi Abraham Joshua Heschel, a key ally of the Civil Rights Movement, is a favorite subject — their history curriculums have historically been prey to the same flaws as those of secular schools.

Foremost among those shortcomings, said educators from Jewish schools across the country, is the centrality of Advanced Placement U.S. History, the primary American history course at many Jewish schools. The universal framework for A.P. U.S. History has in recent years been faulted for taking too light an approach to the history of American racism, and while teachers can adjust that framework at will, the nature of the course as a broad survey of more than four centuries of history makes an in-depth study of any single historical theme a challenge.

For many, the A.P. U.S. curriculum’s flaws reflect the American education system’s general unwillingness to confront the ugliest episodes of American history. That unwillingness squares with the experience of some alumni of Jewish schools. “My history textbooks in high school used to have a bar on the side that was the woman’s voice, or the Black person’s voice, or the Native American person’s voice,” said Beth Birnkrant, a 2007 alum of Charles E. Smith Jewish Day School (CESJDS) in Rockville, Md., close to Washington, D.C. “In elementary school we did a lot of celebration of Native American culture; I don’t remember, in high school, learning about the fact that there was a huge genocide against Native Americans.”

In the last few weeks, Birnkrant, who taught history for several years in a public high school in the Bronx, has been one of several alumni to write to CESJDS with the request that the school reconsider its approach to teaching students about American racism. Ronit Stahl, an assistant professor of history at the University of California at Berkeley, is another. “Where is the antiracist education that focuses on a reckoning with the Jewish role in American racism?” Stahl, who graduated from CESJDS in 1998, wrote. “Where is the effort to examine the history of DC Jewry and the ways in which the DC Jewish community engaged in white flight and benefitted from racial capitalism at the expense of African Americans?”

Stahl’s question spoke to another major pedagogical challenge Jewish schools face in as they consider adjusting their teaching of history: The fact that in many such schools, as Hebrew Union College professor Sivan Zakai wrote in a 2015 paper, “students are taught about the past in order to foster both intellect and American Jewish identity.”

Teaching history with the particular impetus of teaching Jewish values can have pitfalls. Zakai, in her 2015 paper, observed the teacher of one history class in a Jewish day school “graft[ing] a classical U.S. historiographical narrative of expanding freedoms onto a traditional Jewish narrative of slavery to redemption.” In the teacher’s narrative, the experience of Black Americans was not just made central to American history, but also depicted as being closely related to the experience of Jewish Americans, “a shared story of oppression and redemption.” That correlation, Zakai concluded, elided historical complexities in the relationship between Black and Jewish Americans, including the serious differences in social, economic and political obstacles faced by the two groups.

In many Jewish schools, that comparison has a significant influence. Rachel Rothstein, dean of social studies at the Weber School in Atlanta, said that many of her students leap naturally to compare the Black and Jewish American experiences, an instinct that’s difficult to redirect. “My students jump to anti-Semitism, and want to draw parallels, because that’s their frame of reference, and most of them haven’t been exposed to much more beyond that frame of reference,” she said.

While that comparison can be somewhat useful, it also has limitations, particularly as white American Jews have played a complicated role in the history of the struggle against racism. “What does it mean that the targets of the ‘Don’t buy where you can’t work’ boycotts in Harlem in the 1930s were often Jewish storeowners?” Stahl asked. “With the acceleration of white flight, Jews moved. Synagogues moved. it’s important to think about those choices, and what did they mean? A pretty common topic of conversation is assimilation. What does it mean to assimilate in the United States? What [are we] assimilating to?”

As history teachers at Jewish schools nationwide consider, in the current moment of protest, how to more fully address these pedagogical challenges, they’re coming from a wide range of starting points.

Rothstein, at the Weber School, has led a recent reshaping of the American history and literature curriculums alongside Holly Chesser, dean of the English department. For the last two years, they’ve taken the school’s 11th-grade class to Selma and Montgomery, to learn both about the Civil Rights Movement and about some parts of Jewish American history that aren’t pleasant to confront, like the fact that most of Selma’s then-sizeable Jewish community declined to take part in that movement. Rose-Ellen Lessy, chair of the humanities department at Jewish Community High School of the Bay — which has also received letters from alumni agitating for change in the school’s approach to issues of racism — said that the school has “an anti-racist white educators reading group” and has hired a social justice director to help guide the largely white staff in teaching about these issues.

But Paul Thebert, chair of the department of social studies and history at Detroit’s Frankel Jewish Academy, said the high school has a long way to go in breaking out of the traditional mold of American history education. Part of the issue has to do with not sufficiently prioritizing the narrative of “the struggle for equality as part of the American experience;” in one recent year, Thebert said, he taught American history to a class whose teacher at the local Jewish middle school had praised the Confederate general Robert E. Lee. And part of the issue is the extent to which students are isolated from the broader Detroit community: “We talk about redlining a little,” he said, but the students are generally unfamiliar with the history of racism in their hometown.

To move forward, Stahl said, Jewish schools across the country have to reckon with the ways in which their fundamental structure reflects the scope of American racism. On the one hand, she said, the history of American Jewish day schools is worth celebrating: In a secularizing country, they’ve proved successful at “connecting Jewish children to Jewish texts, and Jewish traditions, and inculcating them with the spirit of Jewish life.” On the other hand, choosing to channel substantial communal resources into private schools for the Jewish community meant creating institutions that, by nature, excluded much of the true diversity of the American landscape.

“In Atlanta, the private schools were created as a means to avoid integration,” said Chesser. “Some of those schools are now really being challenged.” While she doesn’t believe Weber was created with the same intention, it’s facing some of the same questions. “I think that’s one of the topics that’s very difficult for private schools to address,” she said. “Their mission may be noble and worthwhile, and everybody in the building may be working toward its realization, but that’s not always why parents send students to these schools.”

For Jewish schools, coming off a challenging semester of online learning, it’s too early to tell with certainty what a new model of teaching the history of American racism might look like. But teachers are eager to try. Thebert wants to help his students take that history more personally, in part by challenging them to more systematically learn about the complexities of white privilege: “I would teach them how to be advocates,” he said. Rothstein wants to incorporate some more challenging perspectives on the relationship between Black and Jewish Americans; she’s thinking about prompting students to look more closely at their own family histories, as the relationship between Southern Jewish and Black communities is “much more complex than we often talk about.” But Lessy and Rothstein both cautioned that the work of changing the current educational system can’t and won’t happen overnight. “You can’t teach anti-racism unless you’ve done that work yourself first,” Lessy said. “It’s not just about reading lists. It’s about how you frame those texts, the kind of questions you invite students to consider, the way you help students do self-reflection and analysis.”