Beyond statements of solidarity: how Jewish groups will combat police violence 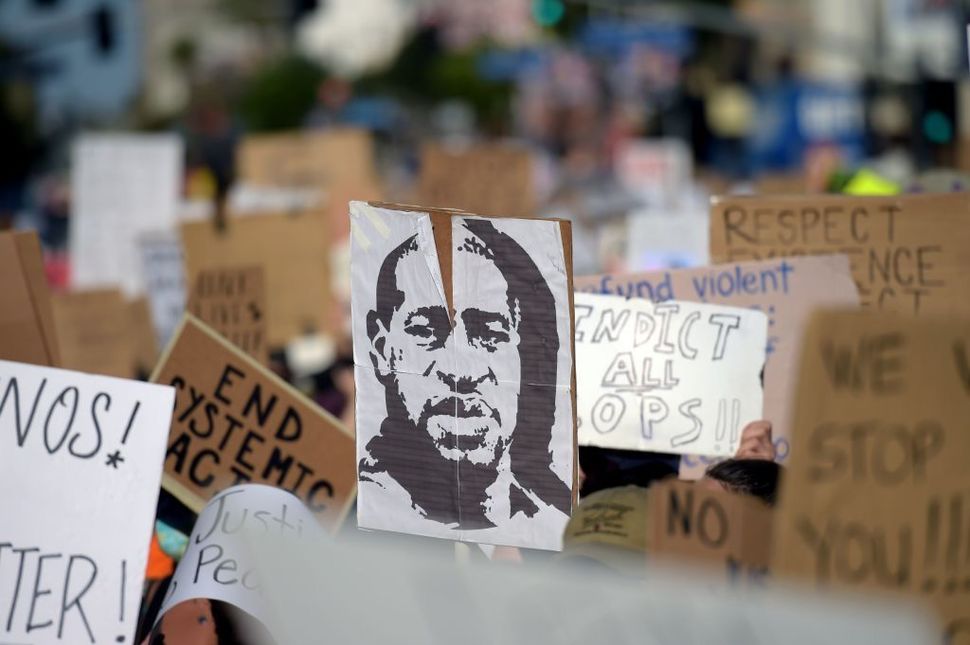 And then something happened that made me proud to be an American. Protests arose in numbers not seen since the 1960s. Image by Getty Images

After George Floyd’s death at the hands of Minneapolis police officers sparked nationwide protests at the end of May, almost every major American Jewish organization released a statement condemning racism and expressing solidarity with the black community.

In the ensuing weeks, some Jewish leaders have advocated for specific policy reforms: Hundreds have signed a letter urging New York Governor Andrew Cuomo to sign the repeal of Section-50A, a law that makes police disciplinary records inaccessible to the public, and support the SAFER NY Act, a bill that would strengthen reporting practices and increase transparency within the police force.

Yet a website created to track Jewish advocacy for criminal justice reform created by Jewish activist and tech expert Russel Neiss showed that few of the organizations who have made statements have also publicly committed to any action.

The Forward spoke to several organizations who are already doing so. Here’s what they’re doing now.

Jews for Racial and Economic Justice

“Our biggest priority it’s something we’ve worked on for many years as a voting member of Communities United for Police Reform: divesting from policing and investing in our communities. We want to see at least $1 billion slashed from the NYPD’s $6 billion budget. We’ve done the research and we know they could reallocate money to the social services we desperately need; it’s a question of priorities and values.

“Especially with COVID, we foresaw that a recession would lead to hard budget decisions. But when we make those hard decisions, are we going to reinforce the inequities that already exist, or are we going to address them? So we were already committed to a strategy that would aim to defund the police. Now, with the protest, people are flocking to JFREJ to make those calls to city council and voice that very clear demand.”

“As the protests started, we quickly convened our Jewish leaders of color and, through listening to them, developed an emergency plan. Generously, several black Jewish leaders within the Reform community allowed us to record them giving testimony, and we pushed those out last Shabbat, asking hundreds of Reform synagogues to feature them as their d’var Torah. We also provided a discussion guide so people could start having conversations about systemic racism.

“We are doubling down to amplify Black voices in the Jewish community. Just as the diversity of America is increasing, so is the diversity of the Jewish community through birth, intermarriage, conversion and adoption. This issue is deeply personal as Jewish families are increasingly multicultural, and we are fighting for the lives of our husbands, sons, uncles and cousins.

“The current tragic events are further motivating Jewish organizations to take actions on behalf of the entire community. Jews themselves experienced, and to some degree still experience, persecution so they are deeply committed to anti-racist efforts on behalf of Black Jews, as well as Black Americans.”

“Yesterday on our weekly ‘Call for Justice Virtual Action,’ we asked participants to make calls in support of Reps. Pressley’s and Amash’s bill to end qualified immunity, a legal provision that protects government officials, including police officers, from civil lawsuits. In Parshat Shoftim, where we begin to get the Jewish laws related to police, we read ‘They shall govern the people with due justice.’ Rashi tells us this means we need to appoint people who are expert and righteous to give just judgment. There needs to be adequate accountability to ensure that those that are doing this work are expert and righteous in their judgment.

“Qualified immunity makes it very hard for people to sue police officers for abuse or misconduct; the doctrine allows police to violate constitutional rights with near impunity, immunizing them for everything from unlawful traffic stops to brutality and murder. As Rep. Pressley has noted, ‘There can be no justice without healing and accountability, and there can be no true accountability with qualified immunity.’”

“As an organization committed to fighting all forms of hate, we believe that systemic injustice and inequality call for systemic change. Congress has the chance to take action against the systemic racism that enabled the murders of George Floyd, Breonna Taylor and countless others by passing House Resolution 988, condemning all acts of police brutality, racial profiling and the use of excessive and militarized force throughout the country.

“ADL is urging Representatives to co-sponsor and pass this crucial resolution. And we are standing in solidarity with Black and Brown communities across the country who continue to be subject to pain and suffering at the hands of a racist and unjust system.

“It’s clear that there’s important, deep, systemic work that needs to happen within law enforcement to rebuild trust and prevent tragedies like the murder of George Floyd or Breonna Taylor. We’re working in coalition with allies to advocate for investments in meaningful police reform and broader efforts to address institutional racism in the criminal justice system. We will continue to do so in the days to come.”

“We’re encouraging our field units to show up where local black organizations are asking allies to show up, whether that’s at protests, with a strong social media presence or through donations to bail funds. We are having conversations with white Jews in order to amplify the call for defunding the police that is coming from the groups Color of Change and the Movement for Black Lives.

“One of the first things we’re working on is a political education program about what it really means to ‘defund the police.’ [The program will] give some history about protests among the black community in this country, look at the difference between defunding and abolition, and address the misconception that there’s no plan for what to do with that money. In fact, there are blueprints for what community investment could look like if there was less investment in the militarization of the police. So we really want to work among our base and our community to do that study and have those conversations together.”

“We are working within our own networks on including Jews of color, on understanding our own biases and prejudices, and our own fears. For many, when they hear ‘black lives matter,’ they don’t understand that this is the theme of these protests, rather than an organization that is anti-Israel. We are working on dispelling that myth.

“We are planning to discuss the question of funding for police in our policy advisory committee. As much as we know there is a call to action by the black community with the tagline to ‘defund the police,’ we are breaking it down to understand it better and to best to see how to be supportive. We are supportive of having more funding go to services that help younger people advance, that help the mentally ill – the people who are most vulnerable.

“We are going to continue to educate our members so they really understand what reform is, so that this isn’t just a moment. We know that different communities are in different places regarding what kind of advocacy positions they can take. But we believe that this is the most significant conversation and moment for the discussion on racism in our country since the 1960s, and we plan to be part of it.”

“We are supporting our members to go out locally and protest by directing people to demonstrations in their cities and to the Movement for Black Lives “Week of Actions” campaign. Organizationally, we’re using our platform to spread the news about bail funds and local black-led organizations like Black Visions Collective.

“We’ll be holding a nonviolent direct action training to help people who want to protest but don’t have experience with the intensity we’re seeing at this moment. But just as our money shouldn’t be funding the militarization of the police in our communities, it shouldn’t be funding the occupation in Palestine either. So we’re still continuing to work on that issue, and we’re seeing the connection in how our public funds are used for violence both here and around the world.”

“NCJW is proud to support the Justice in Policing Act of 2020, which many of our partners helped craft, and which would work to end racial and religious profiling, ban chokeholds and no-knock warrants, and limit the use of military equipment by law enforcement. We believe in protecting vulnerable communities, preventing violence and ensuring that public safety and access to resources is top of mind for leaders.”

Beyond statements of solidarity: how Jewish groups will combat police violence