Jewish day schools still don’t know if they’ll reopen in the fall. Why is it taking so long? 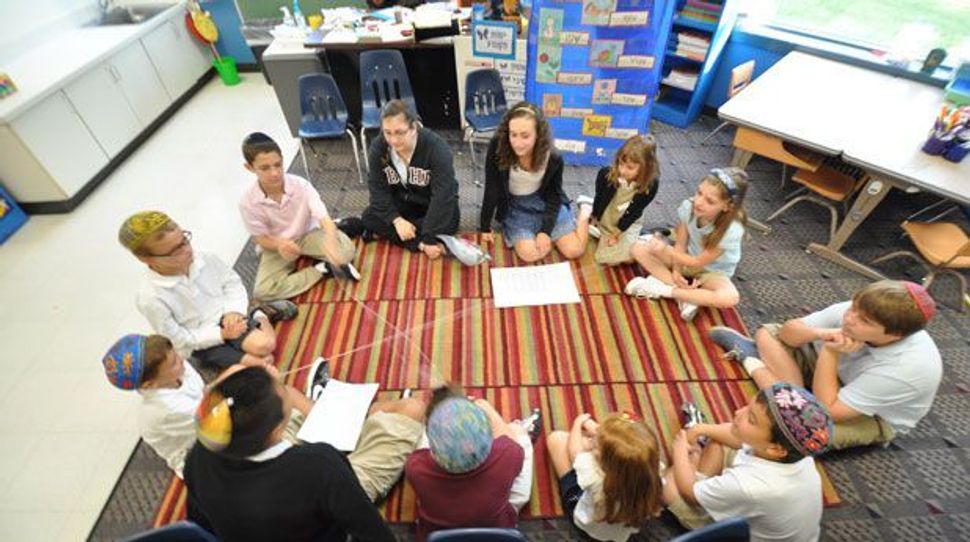 Jewish day schools are still working out their reopening plans for the fall. Image by Hyman Brand Hebrew Academy

Doron Wesly, 45, has two children, six and two, who are supposed to be taking the summer off from their Jewish day school in New York City. But on a muggy Monday in July, he was taking time out of the older child’s vacation to practice reading. After months of distance learning necessitated by the coronavirus pandemic, Wesly is worried that his son will not be ready for first grade in September.

What are your thoughts? Should day school resume during COVID? https://t.co/nrZJUe29lT

He’s also worried that the start of school will just bring more distance learning. His six-year-old son’s school, Hannah Senesh Community Day School, has not yet been able to tell families if they’re reopening — although they have sent some emails with possible scenarios.

“Some schools are basically pushing out the final decision until literally two weeks before school,” Wesly said, “which is frustrating.”

There are 861 Jewish schools with nearly 255,000 students in the United States, according to the most recent count. They are a diverse bunch, from massive yeshivas to tiny Montessori day schools. But these days, parents like Wesly have something big in common.

They are united in worry, and hoping that there will be a safe way to get their kids back in the classroom — for the sake of both those kids, and their own sanity. In the meantime, they’re stuck in limbo as school administrators try to figure out what will happen in the fall by talking to state officials. In most cases, state mandates will have a big impact on families’ lives, including how many days, if any, their children will be out of the house; what kind of childcare they’ll need and how children will get to school, if it opens.

Anxiety is running especially high in New York State, home to the country’s largest Jewish community, because New York is running relatively late in releasing final health and safety guidance for how to reopen public and private schools. Now the state is saying they will make it available on Wednesday, but they’ve also given the schools a tight deadline. It needs the schools’ reopening plans by July 31, said the governor and the education department.

The variation in reopening plans across states and districts reflects a tension that’s afflicted the entire nation since the start of the pandemic — the need of a society to keep its members safe, and also educate its children. The pandemic is exacerbating inequality and difficulties for students who have already struggled in school, yet as the pandemic comes screaming back in states like California, in-person school may feel like too much of a risk.

Compared to other states, New York State is still in the early stages of that analysis. Sara Seligson, managing director for day schools and yeshivas at the Jewish Education Project, said New York schools will have to make a “quick turnaround” to have their reopening plans done by the deadline at the end of the month.

Seligson has been working with the state on private school guidelines, and said part of the hold up was the need to include advice from the state’s Department of Health, which contributes to the guidance as well.

“It is a bit of catch-22,” she said. “There are many schools that already have developed their plans because they can’t wait. They are using CDC guidance and if there are tweaks that need to be made, they’ll do so.”

To be sure, there’s uncertainty in other states, too.

In New Jersey, private schools will not know how many school buses will be available until public schools have made their final plans.

In California, the state provides guidance. Masks are suggested, for example. But there, school districts are the ultimate authority, and two of them — San Diego and L.A. — have already declared that schools will remain online-only due to a spike in cases. Schools and parents are waiting for the verdict from other districts.

In Maryland, private schools are not subject to state mandates on reopening. That means schools have more control, but they’re still sorting out their plans, said Rabbi Ariel Sadwin, the mid-Atlantic regional director for Agudath Israel, an Orthodox lobbying and social services group that works with schools.

And in New York, even the word “guidance” is a bit of a misnomer. It will likely contain both requirements, like communicating with families about reopening in their preferred language, and suggestions, like providing technological help to families, according to a preliminary document.

A spokesperson for the governor’s office, Jason Conwall, said that private and public schools could be subject to inspection, and violations of the guidance could lead to fines or other consequences.

Many of New York’s Jewish schools are preparing multiple plans as they await the final word from the state — one where children come back entirely, one where they learn entirely at a distance and one hybrid model, said Jewish education experts and school staff, including Judith Talesnick, director of professional learning and growth at the Jewish Education Project.

Hannah Senesh, for example, is planning to have supplies for each individual student, stagger pick-up and dropoff and eliminate water fountains if students are able to come back in person.

Some schools in New York and New Jersey have even met with an architect to figure out the best ways to use their space, said Paul Bernstein, the CEO of Prizmah, a network for Jewish day schools.

To prepare, some administrators have forgone their usual vacations this time of year, said Bernstein.

Transportation to and from school is another big, stressful unknown in New York State, where public school districts provide private schools with school buses. The state Department of Health might ask that school buses operate at 50% capacity, said Seligson, which would reduce the number of available school buses.

“If they are strapped in terms of transportation, the thinking is that the private schools will kind of be the stepchildren” and might not be able to access the buses, said Seligson.

Cheryl Rosenberg, 39, is a mother of four children between the ages of seven and 14 that attend three different schools in New York and New Jersey — Salanter Akiba Riverdale elementary and high school in the Bronx and Ben Porat Yosef in Paramus, N.J..

Rosenberg said that the uncertainty of the upcoming school year is actually more stressful than the period of lockdown and virtual learning, because at least she knew what to expect when her children were at home: “There’s nothing to plan for, so we have no idea when we’re going to hear, how flexible the school’s going to be, how flexible work’s going to be.”

While the lack of decision-making is frustrating parents, teachers and administrators, others see some upside.

Corey Katz is the director of college guidance for the girls high school at Hebrew Academy of Long Beach in Long Island and private college counselor, and she said that while she wishes she could plan ahead for the year, scheduling college visits and classes on college essays, she thinks a cautious approach is the right one.

“Even though I like to prepare in advance and in this situation we can’t, I do have confidence that the governor and the state are doing it the right way,” she said. “I’m just waiting for more information.”

And for parents like Doron Wesly, the desire to get back to school is related to a desire for some semblance of normalcy. He said his son watches the news and talks about coronavirus constantly. Screens have taken over their home.

Wesly and his extended family quarantined before they met up in Kent, Conn. this month, to make sure everyone could enjoy time together without risking a coronavirus infection, but it is taking the kids a while to adjust.

“The kids have been separated almost for five months from most human contact, and we have to constantly remind them, ‘Go hug your grandparents,’” he said. “They’re not used to it because they’re used to us telling them, ‘Don’t hug, don’t touch, move away.’”

Jewish day schools still don’t know if they’ll reopen in the fall. Why is it taking so long?