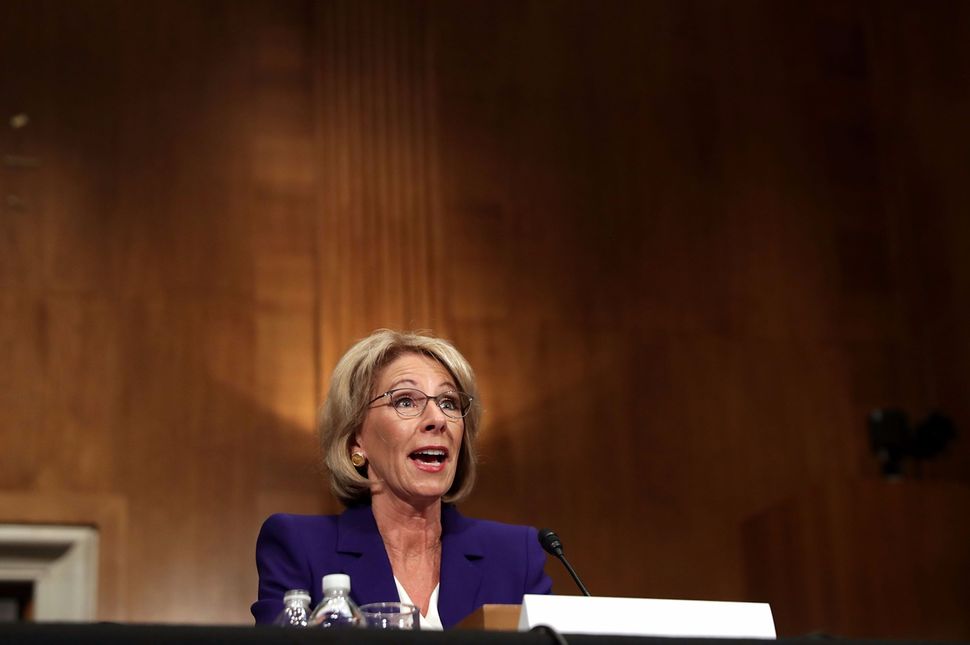 Millions of dollars that could help Jewish private schools pay for transportation and tutoring are in limbo because of a political fight between Education Secretary Betsy DeVos and the Democratic-controlled House of Representatives over whether the money should support all students or just those who are poor.

The dispute concerns $13.5 billion in federal dollars headed toward both public and private schools as part of the coronavirus stimulus package, the CARES Act, to pay for coronavirus prevention measures, activities for children with disabilities, technology for online learning, mental health services and more. Devos, a Trump ally whose support of vouchers for private schools and other conservative positions have made her anathema to the education establishment, wants the money allocated based on the total number of children who attend each private school, while some members of Congress want it to be based on the poverty rates in the schools.

At play are a number of factors— the push-pull between public- and private-school advocates, the tension between DeVos and congressional Democrats, and the broader debate about who should benefit from coronavirus aid.

As a part of the CARES act, the federal government allocated billions of dollars to schools serving children in kindergarten through 12th grade. A portion of that money was supposed to be given to private schools serving low-income students to help pay for supplementary services like summer school.

But last month, DeVos issued a memo that said that school superintendents should allocate the money based on the total number of private-school children living in their areas rather than the number of such students who would normally attend a “Title I” public school with a large concentration of low-income students.

Only 8% of private school children are poor compared to 19% of public school children in the U.S., according to the National Center for Education Statistics. Data on poverty in Jewish day schools is not readily available, but between 16 and 20% of Jewish households earn an income below $30,000 a year, according to one report.

Districts “may serve all non-public school students and teachers without regard to family income, residency, or eligibility based on low achievement,” Devos said.

About 5.8 million children attend private schools, according to the National Center for Education Statistics, compared to 50.8 million in public schools. There are 861Jewish schools with nearly 255,000 students, according to the most recent Jewish day school census from the AVI CHAI Foundation. Those schools range widely in denomination, class size and the degree of religious and secular education taught— some Orthodox yeshivas teach almost exclusively religious subjects, while many Mordern Orthodox, Conservative and non-denominational day-schools teach religious studies along with a college preparatory curriculum.

If the DeVos memo is followed, it would likely mean a huge windfall for Modern Orthodox, Conservative and non-denominational day-schools whose students tend to come from middle- and upper-class families. Yeshivas that serve the Haredi populations tend to enroll many more poor children, and would probably get the same amount regardless of whether DeVos or the Democrats prevail.

In New York state the area with the highest number of children enrolled in non-public school— nearly 67,000 children— is District 20 in Brooklyn, which includes the Haredi enclave of Borough Park, according to state data. More than 32% of households in Borough Park have incomes below $24,999 annually, according to census data, compared to about 24% of the city overall, so schools there would already have been given hefty assistance under the original interpretation of the CARES Act.

Public-school advocates and lawmakers opposed to the DeVos recommendation say it will siphon too much of the education fund to schools that can afford their own services.

A public education advocacy group in New Jersey estimates that $800,000 would be funneled away from Newark’s public schools and into private schools under DeVos’s approach, which the group called a “patent misreading” of the CARES Act.

“The Department’s new policy will direct districts to allocate additional resources and services to wealthier private-school students, thereby leaving a smaller amount of funds available to serve public-school students,” said a letter from some members of congress opposed to the recommendation.

But private-school advocates say the coronavirus pandemic is affecting all schools and all children, not just poor ones, so the aid package should likewise be for all schools and students.

“The COVID pandemic is not discriminating among the adults, family, or children, the schools, that it is inflicting hardship upon, any more than a hurricane or a tornado discriminates,” said Nathan Diament, executive director of the Orthodox Union Advocacy Center. “You can’t deal with a pandemic by only dealing with some of the school population.” The government aid, he added, should “help across the board.”

Diament said that the money would go for services “focused on the practical necessities of the emergency,” like sanitizing and preparing for additional distance-learning, at Jewish schools that are already in dire financial shape. He also said that “the public-sector advocates have this persistent ideological reflex to oppose anything that supports nonpublic school children.”

At least 44 private schools have already shut down because of the pandemic, according to a tracker maintained by the Cato Institute, a libertarian think tank that is a proponent of school choice, none of which are Jewish. But given the widespread unemployment, some Jewish schools are preparing for a 20% to 30% increase in requests for tuition assistance, which could have significant financial consequences. Day schools could also see costs increase if enrollment drops, or class sizes or bus loads shrink to thwart the spread of the virus.

DeVos defended her approach in a letter to the Council of Chief State School Officers, which represents state education leaders. “There is nothing in the act suggesting Congress intended to discriminate between children based on public or nonpublic school attendance,” she wrote.

DeVos has been accused of using the education department to push dollars into private schools since she took office, because of her support for charter-school expansion and the use of government money to pay for private-school tuition through vouchers. When asked by New York’s Catholic Archbishop if she was trying to “utilize this particular crisis to ensure that justice is finally done to our kids and the parents who choose to send them to faith-based schools,” DeVos said “Absolutely.”

CARES Act education money has already started to flow into states. Indiana has said it will not follow the formula put out by DeVos, and will instead distribute services to private schools based on low-income enrollment, saying that approach “prioritizes communities and schools with high-poverty who are at most risk and in need of the additional funds.” Tennessee and Texas, on the other hand, have advised districts to follow DeVos’ recommendations.

DeVos said in a letter to state education leaders that she will draft a rule, which would be subject to a public comment period, to ensure her recommendations are followed. But Sen. Lamar Alexander, a Tennessee Republican, told reporters](https://www.future-ed.org/what-congressional-covid-funding-means-for-k-12-schools/) he thinks the money will be distributed using the original formula.