Where the children played: Jewish Immigrant kids of New York and their games 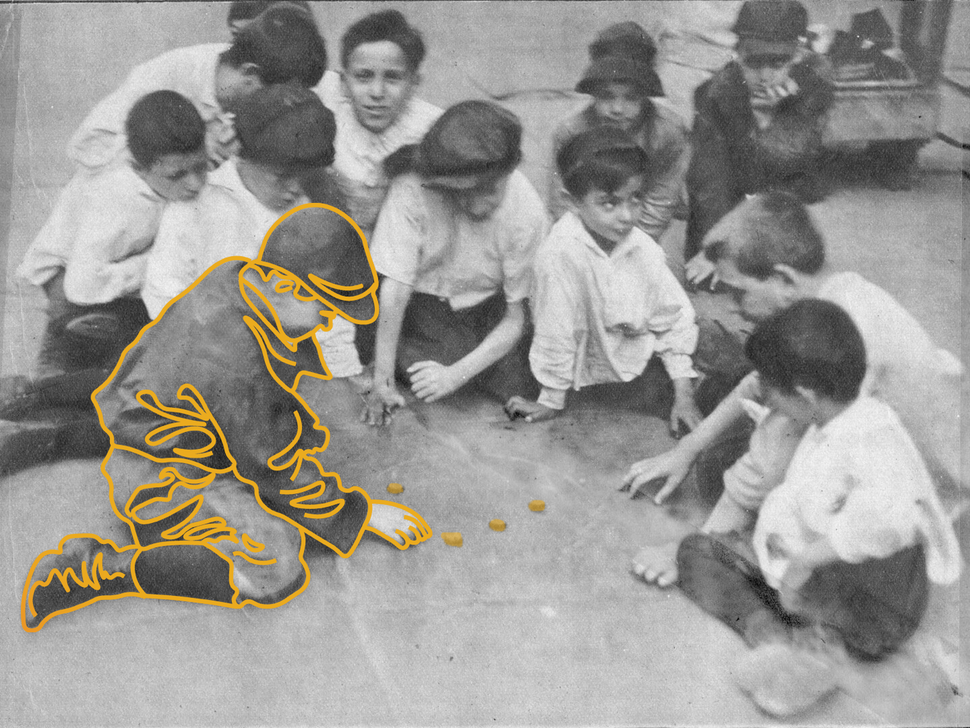 Grounds for play. East side kiddies playing checkers on a hot afternoon (children playing on the streets in the Jewish neighborhood in New York). Image by The Forward art by Kayla Garb

The Forward is one of 57 libraries, museums and city agencies, contributing to a new app called Urban Archive, helping make historical materials engaging and accessible. Children take centerstage in the story of this archival image. Forward coverage reflected the cultural and political attitudes toward childhood and its games as they evolved for Jews and Americans. For more, check out our Urban Archive collection.

The history of organized outdoor play for children in New York goes back over 100 years, reflecting the social and cultural issues throughout. This undated Forward photo — probably taken in the early 20th century before the playground movement became widespread — is captioned “Grounds for play. East side kiddies playing checkers on a hot afternoon (children playing on the streets in the Jewish neighborhood in New York).” The 12 children, who all appear to be under 10 years old, are playing an unknown game with checkers game pieces placed inside a chalk circle.

The modern playground movement officially started in the late 19th century as child labor began to lose favor. The movement aimed to provide public, safe, fun play environments particularly for poor and immigrant children. Before the movement picked up steam, children played anywhere there was space, including public sidewalks and streets. During this period, street games truly had their heyday. Kids used manhole covers and fire hydrants as bases in stickball, walls and steps leading to apartment doors as courts for handball and stoopball.

A survey in New York City back in 1904 found that the 10 most popular street games were playing with fire, craps, marbles, hopscotch, leapfrog, jump rope, baseball, cat (hitting and catching a stick), picture-card flipping and tops.

Of course, these games continued after the advent of playgrounds, but in playgrounds, children were free to make the space theirs and could do so in safety.

The theory behind the push for these designated spaces for children was that play was a healthy, positive and even educational pastime for kids. In 1910, early playground advocate, Lee Hamner took it a step further, saying “The playground of today is the republic of tomorrow.” He went on: “If you want 20 years hence a nation of strong, efficient men and women, a nation in which there shall be justice and square dealing, work it out today with the boys and girls on the playground.”

The earliest playgrounds were located in tenements, schools and parks that already existed. Built in 1898, the Hudsonbank Gymnasium in Hell’s kitchen was New York’s first outdoor public playground. It was built to encourage physical activity among the city’s tenement youth. The movement helped make city parks more usable, with people taking advantage of the grass for sports and walking; previously, the parks kept visitors off the grass.

At the formation of the Playground Association of America in 1906, President Theodore Roosevelt said, “City Streets are unsatisfactory playgrounds for children, because of the danger, because most good games are against the law, because they are too hot in the summer, and because in crowded sections of the city they are too apt to be schools of crime.”

In 1905, the Washington Post sang playgrounds’ praises, saying that they reclaimed children from evil influence, broke up gang fights and paved a road to “good American citizenship,” working off their physical energy “properly and innocently” away from the misery and squalor of garbage cans and alleys.

It’s clear from their writing that early advocates understood play to be not just a way to pass time but that it was a means of socialization and even an important part of becoming American.

Of course Jewish immigrants played in their old countries and play was a part of Jewish tradition. According to historical documents, Jewish boys in 19th-century Eastern Europe played with dreidels. And traditional Jewish children’s songs such as Mordkhe Gebirtig’s “Hulyet, kinderlekh” (Revel, Little Ones) showed that Jewish culture valued play for their children before they entered the structured life of adulthood:

Revel, revel, little ones,
Now, while you are still young,
For from the springtime to the winter
Is but an eye-blink long.
(Translated in Vishniac, 1999)

But after the move to America, intergenerational, cross-cultural debates raged in Jewish homes over what and how children should play. In 1903, The Forward’s founding editor, Abraham Cahan himself waded into the argument with a prescient editorial about baseball.

“Let’s not raise our children to be foreigners in their own country,” he said, urging Jewish parents to allow their sons to play this quintessentially American game.

He continued “Let your boys play baseball and even become outstanding players as long as it doesn’t interfere with their studies and doesn’t put them in bad company.”

By 1922 the Forward was publishing various “entertainment” options for children. “There’s a children’s ballet at the Rand School,” the article read, alongside news of a children’s magazine being published there bi-annually. “Children’s performances and ballet offer your children and yourself a chance for enjoyment.”

As a progressive socialist Jewish newspaper, the Forward saw it as part of its duty to recognize childhood as an international affair with its own political momentum and repercussions. With the end of the Holocaust and the issue of child refugees, they wrote about programs for them.

In a 1948 issue, they spoke of the importance of joy for these children in particular. “True childhood happiness for the first time is being experienced by the sad children recently arriving from Displaced Persons camps in Europe. They’ll take part in a new program offered to new Americans by the United Service and well-meaning volunteers.”

In 1914, the city started Play Streets, a program that continues today. Communities closed their streets to cars and opened them up to pedestrians for play. The first play street was formed when a police commissioner closed a stretch of Eldridge Street between Rivington and Delancey on the heavily Eastern-European Jewish Lower East Side. The city put out pianos and the Eldridge Street Settlement held a folk dance festival.

Recent days of pandemic see a similar concern for the well being of the city’s youngest residents. Mayor Bill de Blasio announced that play streets would return in the summer of 2020 so kids could play during the COVID-19 pandemic.

Where the children played: Jewish Immigrant kids of New York and their games