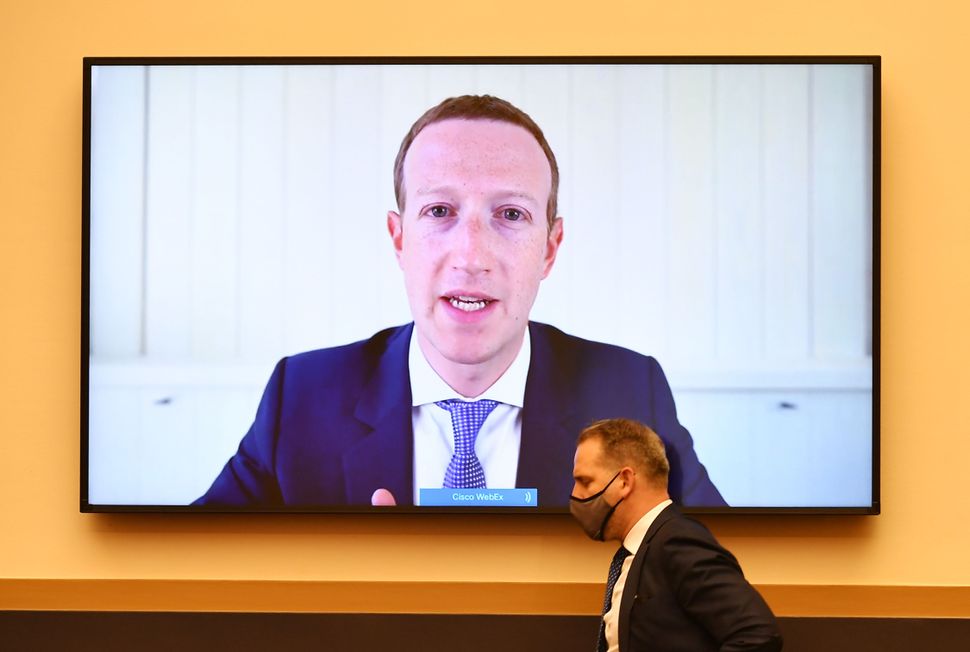 What finally pushed Facebook to announce it would take down posts that make reference to Jewish control of the world, or that include “caricatures of black people in the form of blackface” — two forms of hate that are well over a century old?

Was it the letter, sent August 5, from the attorneys general of 20 states to Mark Zuckerberg, telling the company to do more to prevent hate content and abuse on its platform?

Was it the open letter, published August 7, from more than 120 Jewish organizations urging Facebook to adopt an internationally known definition of anti-Semitism, and to take down posts that meet the definition?

Was it the ad boycott begun this summer, led by the Anti-Defamation League and the NAACP, that saw major multinational companies sign on in support and even led to a brief dip in Facebook’s stock price?

The idea of banning content that promotes stereotypes of Jewish global control came up a year ago, in a meeting with several Jewish groups convened by Facebook, and was pushed primarily by the World Jewish Congress.

“We applaud Facebook for its leadership and hope this move will be a guiding light for other social media companies to follow,” Ronald Lauder, president of the Congress, said in a statement to Jewish Insider about Facebook’s update.

It took a year to come up with what Facebook calls an “operational policy” on Jewish global control because of the policy deliberations, wordsmithing and data and image analysis involved, said Jordana Cutler, Facebook’s head of policy in Israel and a liaison to Jewish diaspora groups: determining which images and statements will be impacted and identifying offending memes to look out for. The process was also slowed by the pandemic, as people on the team shaping this policy focused time on Covid-19 misinformation.

The site now officially bans content that references “Jewish people running the world or controlling major institutions such as media networks, the economy or the government.”

The specific content bans Facebook announced Tuesday build on a few stereotypes it had already identified: posts that compare Jews to rats, or depict Black people with farm equipment, or Mexican people as worms.

The new guidelines also ban images of Black Pete, a folk Christmas character popular the Netherlands that is usually portrayed in blackface.

Facebook’s policy update has drawn praise from some groups and grudging recognition from others. Those organizations who have pushed Facebook to more forcefully crackdown on Holocaust denial or delete any content that meets the International Holocaust Remembrance Alliance’s definition of anti-Semitism say the the change is too little, too late.

“This is a welcome yet overdue step from Facebook,” Jonathan Greenblatt, the CEO of the ADL, said in an emailed statement. “It’s distressing that it took this long for the platform to crack down on these particular forms of hate, when it’s quite obvious they should not have been allowed to proliferate in the first place.”

Facebook has been under close scrutiny this year for its role as a disseminator and perpetuator of hate speech.

A study released Tuesday by the ADL found that Facebook actively suggests its users to join anti-Semitic and white supremacist groups.

An internal investigation from Facebook, whose results were obtained by NBC, showed that there are thousands of groups and pages, with millions of followers, that support the QAnon conspiracy theory. Facebook has been an instrumental platform in the growth of the community around that conspiracy theory, which experts say includes many people with anti-Semitic views.

That growth is having real-world impact: On Tuesday, a candidate for Congress in Georgia who has made her belief in the QAnon conspiracy theory central to her campaign, and has called the Jewish billionaire philanthropist George Soros a Nazi, won her district’s Republican primary.

Some organizations that have directly lobbied Facebook to be tougher on hate speech welcomed the changes.

In a statement, Daniel Elbaum, the AJC’s Chief Advocacy Officer, called Facebook’s new policy “a step in the right direction and reflective of our ongoing conversations with Facebook officials in the United States, Europe, and Israel.”

But other organizations criticized Facebook for not going further.

Mort Klein, head of the Zionist Organization of America, said it was a “tragic mistake” for Facebook to not adopt that the definition of anti-Semitism promulgated by the International Holocaust Remembrance Alliance, which includes classic anti-Semitic tropes like Jewish control of the world, but also comparisons of Israelis to Nazis and holding Jews collectively responsible for Israeli policies or actions.

In May, Peter Stern, Facebook’s director of Content Policy Stakeholder Engagement, said in a conversation with a representative of the AJC they have “mapped” some elements of the International Holocaust Remembrance Alliance’s definition of anti-Semitism onto their own policies, but not the parts that relate to Israel, since the site does not want to penalize people for criticizing Israel.

“By not making that step, they’re increasing my fear that people in power are allowing anti-Semitism to go without a strong backlash,” said Klein. He added that letters he has sent to Facebook about the definition have been answered with “pro forma” responses.

Greenblatt, of the ADL, criticized Facebook for not taking a stronger stand on Holocaust denial, and called it “disturbing” that the company classifies such posts as “misinformation,” and not a form of hate speech against a protected group.

Facebook’s stand on Holocaust denial has been a banner issue since 2018, when Mark Zuckerberg drew widespread criticism for suggesting that there is a difference between Holocaust denial that is inaccurate and that which is offensive.

“I’m Jewish, and there’s a set of people who deny that the Holocaust happened,” he said in an interview with Recode’s Kara Swisher. “I find that deeply offensive. But at the end of the day, I don’t believe that our platform should take that down because I think there are things that different people get wrong. I don’t think that they’re intentionally getting it wrong.”

“We know many people strongly disagree with our position – and we respect that,” Cutler said. “We have a team that is dedicated to developing and reviewing our policies and we welcome collaboration with industry, experts and other groups to ensure we’re getting it right.”