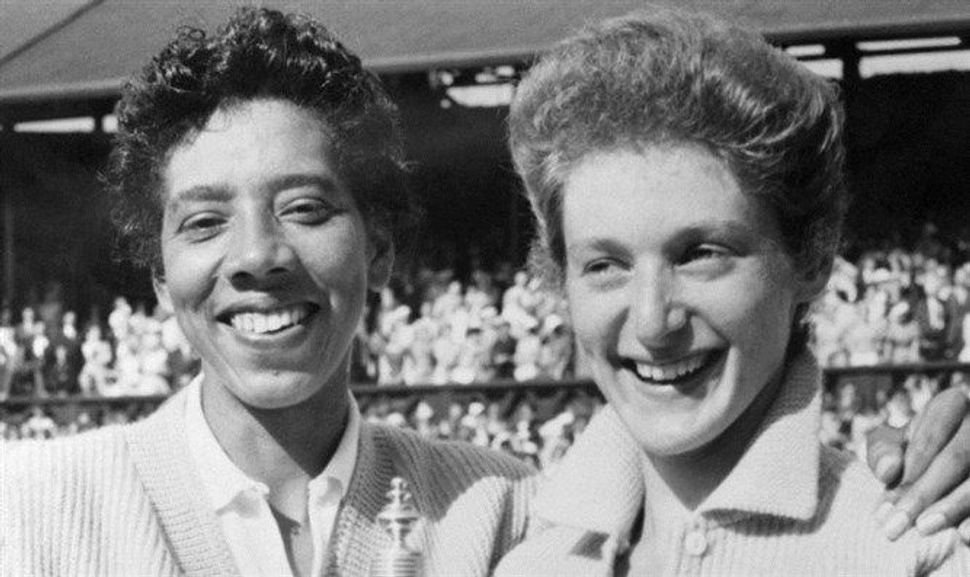 Angela Buxton, an English Jewish Wimbledon champion who died this week at age 85, left behind a legacy as a very good professional tennis player, but an exceptional human being.

At a time when tennis was deeply segregated, she befriended Althea Gibson, a Black American tennis phenom, and stuck by her side as Gibson cracked what was then the whitest and snobbiest of sports. Their friendship — mutual, supportive and long-lasting — changed sports history.

I never spoke with Buxton, but the story of her friendship with Gibson, detailed in a powerful 2004 book, “The Match,” by Bruce Schoenfeld, has long captivated me. She’s the interview I always figured I’d get around to doing, but I figured wrong.

Althea Gibson and Angela Buxton in 1956

Angela Buxton was an upper middle-class Jew from Liverpool with a ruthless competitive streak who whomped the competition at the 1953 Maccabiah games. Althea Gibson was the daughter of South Carolina sharecroppers who moved with her family to Harlem, only to be placed in foster care due to her father’s abuse. She started life as an amateur boxer and would become one of the greatest female professional tennis players—and golfers— of all time.

Buxton became Gibson’s friend and shield, protecting her even, Schoenfeld wrote, when doing so, “put her at a competitive disadvantage.”

The two first faced off as opponents in the semi-finals at the 1956 French Championships. The all white crowd of 8,000 jeered as Gibson walked on to the court. Buxton, who was just 19, and Gibson, who was 22, battled to a set apiece.

Then, in the midst of the decisive third set, Gibson’s right bra strap broke. The crowd erupted in hoots and whistles. Without a moment’s hesitation, Buxton raced across the court and threw her arms around Gibson, shielding her breasts from view. Buxton walked Gibson off the court without releasing her embrace.

“At that moment,” Schoenfeld writes, “there was not a single player in tennis other than Althea whose plight would have stirred Buxton into action.”

“I felt for Althea,” Buxton told Schoenfeld years later. “I wanted her to do well nearly as badly as I wanted to do well myself.”

After Gibson changed bras, the two walked back on to the court together, and into an uproar.

Because Gibson had received outside help and walked off a court during play, the crowd and umpires were calling for her ouster (Buxton had walked off the court as well, but that didn’t seem to matter). Gibson’s violations meant Buxton could coast into the French Championship finals.

But Buxton refused to claim a violation. The officials pressured her, but she wouldn’t budge.

“Althea’s disqualification was exactly what she didn’t want,” writes Schoenfeld.

Gibson went on to beat Buxton—barely—and then defeated her opponent in the finals to become the first Black player of any gender to win a Grand Slam championship.

Buxton and Gibson teamed up as winning doubles partners three times, becoming French and Wimbledon doubles champions in 1956. And they became close friends off the court as well. 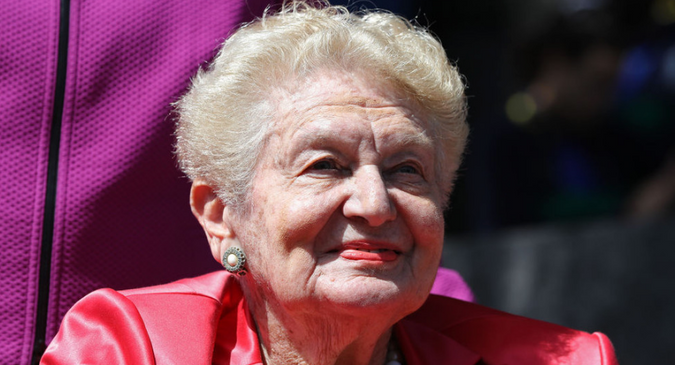 They were both outsiders, true. Buxton, who was initially banned from London’s prestigious tennis clubs because she was Jewish, could relate to Gibson’s struggles. But Buxton needed Gibson as much as the reverse — they were each others’ saviors.

“Althea lived life in a way that Angela never would have dared,” Schoenfeld writes.

“Althea was the only person who would talk about sex with me,” Buxton said. “She had done things I hadn’t.”

Buxton took on the younger sister role as the two ventured out to nightclubs, movies, and parties, like, Schoenfeld writes, “a couple of movie characters, stumbling in and out of fun and harmless trouble.”

“For the only time in their tennis careers, Angela and Althea found someone who made them feel as if they belonged, if only to their exclusive club of two.”

As they aged, their paths diverged. Gibson reinvented herself as a professional golfer, then suffered though sickness and poverty. Buxton, who had to give up tennis due to injury at 22, lived an upper middle-class life in England, including a stint in Israel during the Six Day War.

Gibson lived long enough to see the Williams sisters dominate tennis. Buxton, who lived part-time in Florida, arranged for a courtside phone call between a teenage Venus Williams and the woman who blazed her trail decades earlier.

When illness bankrupted Gibson, she turned to Buxton, who raised $1 million to support the tennis legend. They remained in touch until Gibson died in 2003 at age 76.

Now Gibson’s doubles partner is gone as well. Maybe it was tennis that forged their bond, or being women in a man’s world, or a common love of adventure.

But I always thought what tied Angela and Althea together was a sense of shared destiny, not just on the court but off as well. They were two very different people who wanted success for the other as much as they wanted it for themselves. If that’s not heroic in our time, or any time, what is?