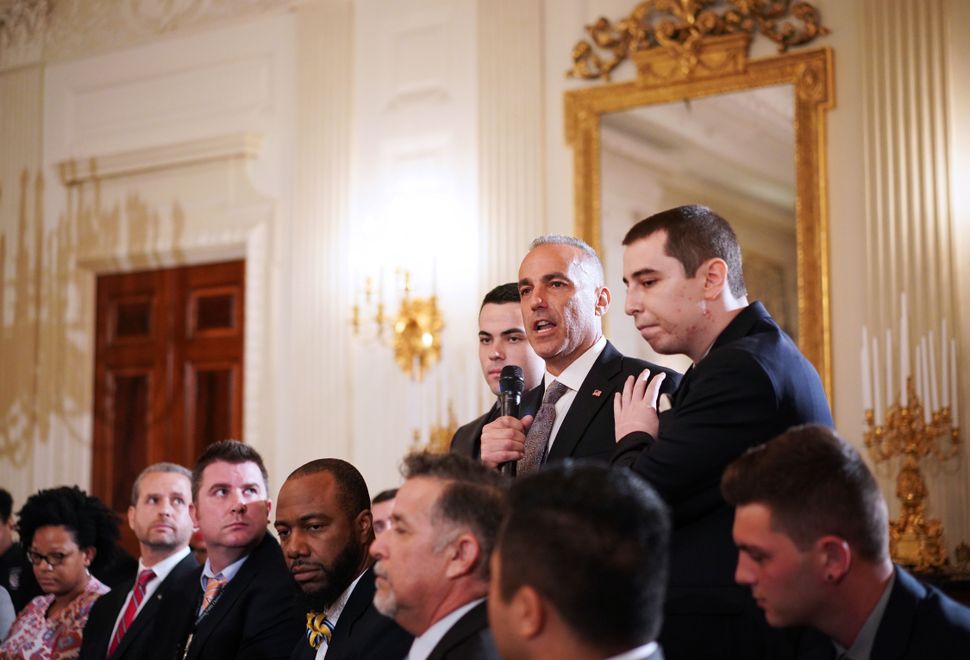 Andrew Pollack, flanked by his sons, speaks during listening session on gun violence with US President Donald Trump. Image by Getty Images

Two dads, themselves born in the same year.

Both Jewish. Both New York-area transplants to Florida, who didn’t think much about politics, until their daughters were shot dead by a gunman in 2018 at Marjory Stoneman Douglas High School in Parkland.

Now Andrew Pollack and Fred Guttenberg are lauded as authorities on gun violence and how to mitigate it, and they are both putting their imprimatur on a presidential candidate this nominating season — but not the same one.

On the first night of the Republican National Convention, Pollack implored the country to vote for President Trump.

“I truly believe the safety of our kids depends on electing him president,” Pollack said in his heavy Queens accent. “He’s a good man, and a great listener, and he cuts through the BS.”

Pollack’s daughter, Meadow, was one of 17 people killed by gunman Nicholas Cruz. So was Jaime Guttenberg. Her father spoke at last week’s Democratic National Convention, which nominated Joe Biden.

“When my daughter was murdered in Parkland, Joe Biden called to share in our family’s grief,” he said. “I quickly learned about his decency and his civility, but I also learned about his toughness and how he’s beaten the NRA.”

The same day shaped these two men. What they learned from it was very different.

“It’s easy to blame the gun,” Pollack has said. He could not be reached for comment.

“17 people died because of the gun,” said Guttenberg, on Monday morning in a conference call hosted by the Florida Democratic Party as the RNC got underway. Guttenberg was not available for comment.

Pollack’s daughter Meadow was 18 at the time she died. She had been planning to attend Lynn University in nearby Boca Raton. She loved the outdoors and her grandmother.

“Nothing makes me happier than my grandma and her smile,” the teen wrote in a 2015 social media post featuring a photo of her father’s mother, Evelyn Silverberg Pollack, according to the Miami Herald.

Meadow’s smile, the rabbi said at her funeral, was “like sunshine.”

Also at her funeral, her father’s rage erupted: “”You killed my kid,” he said, addressing Cruz in absentia. “‘My kid is dead’ goes through my head all day and all night. I keep hearing it over and over,” said Pollack, now 54, according to the Sun-Sentinel. He lamented what he saw as his failure to protect her.

Since then, Pollack has worked to try to keep other parents from experiencing the horror visited on his family — but he hasn’t become a gun control activist like many victims, including Guttenberg.

Before the shooting, he told JTA, he’d been basically apolitical — a businessman who cared about Israel, and liked Trump’s criticism of the Iran nuclear deal.

Afterwards, he researched and analyzed the shooting and came to a very different conclusion: that gun control campaigns were a distraction.

The real problem, he said, both during the convention and during a Sunday interview on Fox & Friends, was a foolish educational program that keeps violent students in school for far too long.

.@JoeBiden doesn’t care about your children.

He wants criminals walking the same halls as them.

He wants to take cops out of schools to leave them defenseless.@realDonaldTrump is the only thing standing in the way of stopping school shootings.

Watch me on Fox & Friends ? pic.twitter.com/hKsSnXN4BN

Such programs had to be stopped, Pollack said, and Trump tried to help stop them, by excising them from federal guidance. But Biden will bring them back. ` The solution, he said, is better security in schools, including police officers and their guns.

Guttenberg, father of Jaime, says gun control is not a distraction, but the solution. His daughter was 14 when she died. She loved dance, according to a website created by teens that profiles children who were killed by gun violence.

“I dance because it makes me feel possibilities are endless and limits don’t exist,” she wrote, according to the site. “Every time I leap, I feel as though I’ve touched the stars.” Guttenberg’s goal was to become a pediatric physical therapist. She was diligent — practicing dance up to 13 hours a week — and studious: she got straight As on her report cards.

Almost a year after she died, hundreds gathered at a local community center in her honor. They danced.

Guttenberg, also 54, is focused on supporting gun control as a way to honor Jaime’s memory. In 2018, he told the Guardian that his priorities were adding background checks, waiting periods before gun sales, raising the minimum age to buy guns and banning bump stocks.

And as vociferously as Pollack supports Trump, so does Guttenberg support Biden.

“Last week, our next president Joe Biden was speaking about darkness and the light, and we are going to see examples of that when the week gets underway. My children went to school on Feb. 14, 2018,” Guttenberg said on the Monday-morning conference call. “I sent two children to school to learn and be safe. One of them I now visit in a cemetery.”

As a guest at the State of the Union address earlier this year, Guttenberg erupted in anger at the president’s neglect to mention gun violence victims. He was handcuffed and escorted out.

Andrew Pollack and I, two dads who lost our kids in Parkland. We are different in the direction we pursue, but my hope is that we are both successful. What if we end up with Gun Safety reforms and safer schools. That would be worth celebrating.https://t.co/Jnham6fyux