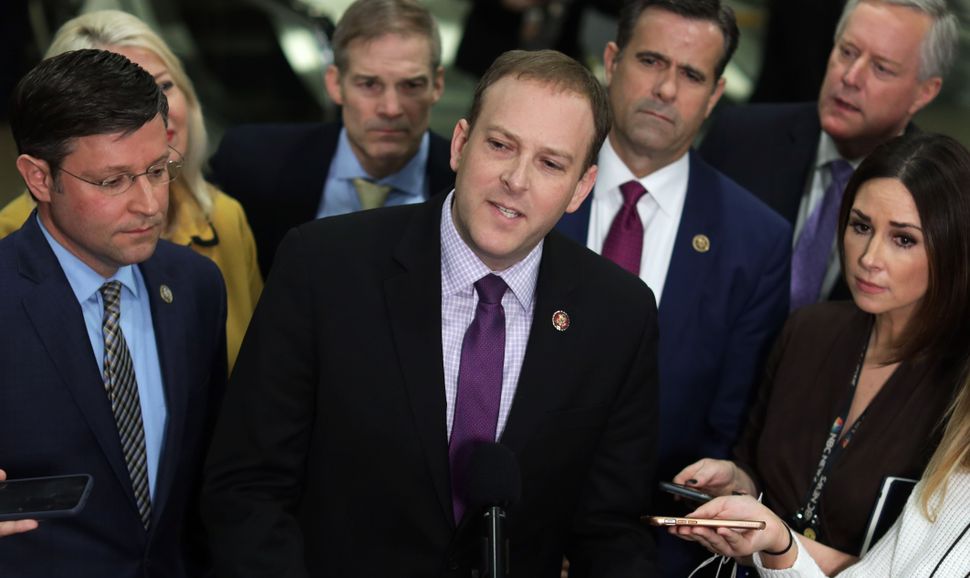 Zeldin, speaking alongside Congressional Republican leaders on January 27, during the Senate impeachment trial. Image by Getty

Rep. Lee Zeldin is a Republican congressman from Long Island, N.Y., who has positioned himself as a staunch political supporter of President Donald Trump and the standard bearer for Republican support of Israel.

Zeldin is speaking in a primetime slot on Wednesday evening during the Republican National Convention.

He is currently one of two Jewish Republicans in the House of Representatives, is co-chair of the House Republican Israel Caucus, and one of several Jewish veterans serving in Congress. He served in the Army’s military intelligence unit from 2003 to 2007, and deployed to Iraq in the summer of 2006. Before joining the House he was a member of New York’s State Senate for two terms.

Zeldin joined the House in 2015, and emerged as a hawkish voice on Israel policy. He joined Trump’s fight to repeal then-President Barack Obama’s nuclear deal with Iran. (Two-thirds of Jewish lawmakers backed the deal in 2015.)

Zeldin publicly supported Trump since May 2016, whom he endorsed after the then-candidate effectively clinched the Republican nomination. He has since supported Trump’s decision to kill DACA; defended Trump after his “both sides” comments on the violence in Charlottesville in 2017 and emerged as one of the most vocal critics in Congress of the impeachment probe.

Zeldin has, like many of his Republican colleagues, seized on talking points used by Trump about his rivals, such as suggesting that Joe Biden’s son was paid money by a corrupt Ukrainian company to influence Biden. According to fact-checkers and experts, Trump has repeatedly twisted the facts about Hunter Biden’s work in Ukraine.

The relationship goes both ways: After a hotly contested race in 2018, Zeldin beat his Democratic opponent by about four points [after getting an endorsement from Trump.(https://forward.com/fast-forward/411005/lee-zeldin-wins-trump-backing-in-close-long-island-congressional-race/) During the race, Zeldin accused his opponent, also Jewish, of defacing his own campaign sign with a swastika.

Zeldin’s support for Trump, and of Trump’s allies, is born of political calculation and personal temperament, according to observers and political analysts. Though the district twice voted for Obama, Trump won it by 10 points in 2016. Zeldin’s fate will be tied to how well he and the Republican party can motivate their base in the area to replicate 2016.

And as a former soldier, Zeldin values loyalty, much as Trump does.

“He’s a veteran. He has that code of honor: You don’t desert somebody,” Mike Dawidziak, a longtime pollster and political strategist who has worked on campaigns in the district for forty years, said in 2019.

Yet Zeldin has criticized the president at least once: When Trump said that Jewish Democrats were displaying “disloyalty” to Israel, Zeldin told JTA he did not like the term.

“It’s a word that I wouldn’t use, with a long history of being used by others who have a hatred towards Jews and Israel,” he said.