How these couples solved the pandemic Jewish wedding dilemma: to wed or wait? 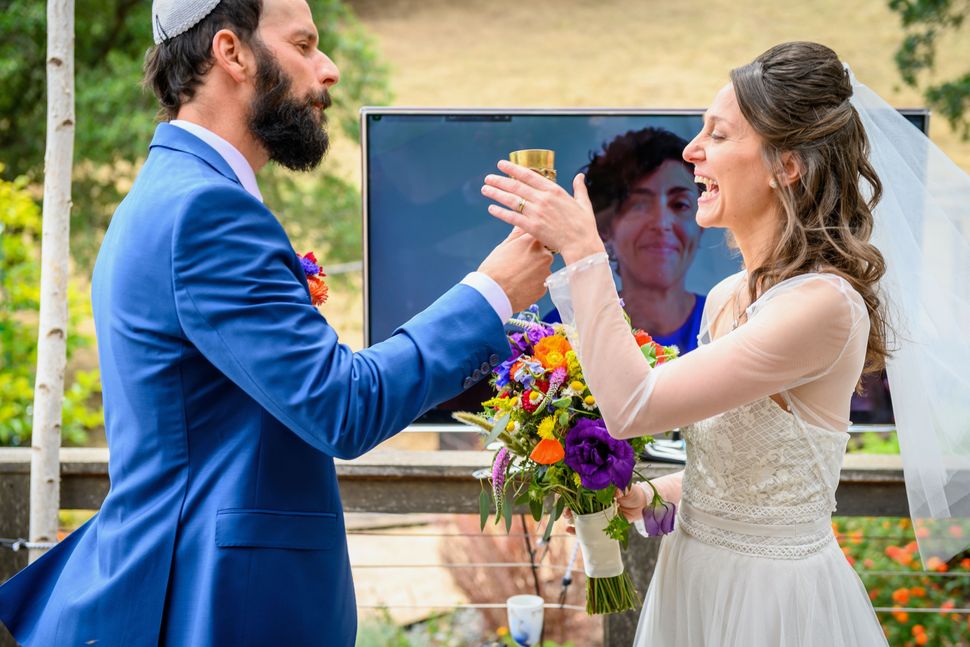 Rabbi Adina Allen officiated the wedding of Miriam Nehama Ani and Brandon Waloff from her home. Image by Éli Zaturanski

Ariel Platt and Lilli Flink, who met at Columbia University and now live in Philadelphia, both cried as they sent out an email this spring telling some 300-plus friends and family they were postponing their Labor Day wedding until 2021.

It was not a decision they came to easily.

In addition to the wedding, there was a Shabbat dinner too, with time to relax and take part in recreational activities on Saturday. Since both were longtime Camp Ramah-niks (though in different regions of the country), they chose the Union of Reform Judaism’s Camp OSRUI (Olin Sang Ruby Union Institute) in Wisconsin to host their weekend celebration.

“We were on the same page that we want to dance like crazy, and have that explosion of energy with our loved ones all celebrating with us,” said Platt, a nonprofit consultant. “We couldn’t picture doing it without our grandmothers, God willing, our parents and those closest to us.”

Furthermore, he said, “It was black and white for us that we wouldn’t put our guests in harm’s way.”

As the novel coronavirus continues, thousands of couples who were supposed to marry this year have already or are still facing the same decision: Do they postpone, hoping things will be back to normal in a year’s time? Or do they proceed as planned, even though it means their weddings look nothing like those they had dreamed of?

Reform Rabbis Jen Gubitz and Karen Glazer Perolman, who both married recently in ceremonies very different from those they had planned, led a workshop to deal with this very question in May. 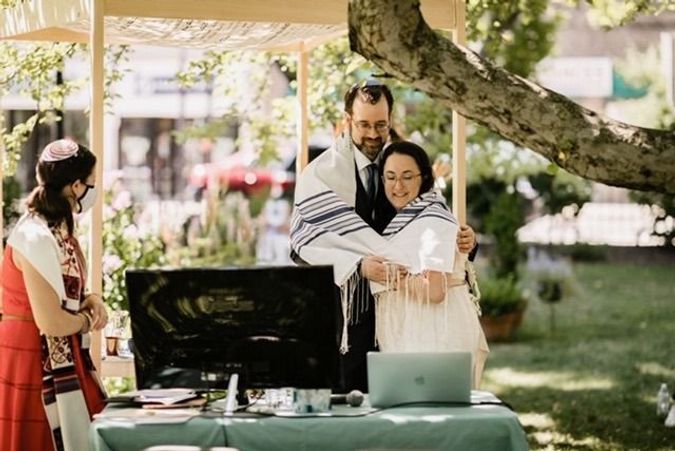 Rabbi Jen Gubitz and Matan BenYishay receive the priestly blessing from their parents via Zoom. Image by Dan Aguirre

About 50 couples tuned into a Zoom workshop called “With This Mask, I Thee Wed: Spiritual Tools for Postponing Your Wedding,” co-sponsored by Temple Israel of Boston and Congregation B’nai Jeshurun of Short Hills, N.J., where Gubitz and Perolman work.

The workshop grew out of conversations the two began to have in March or April, each knowing the other had been planning to get married soon, too, and of course realizing they were far from alone in their conundrum.

Speaking of her now-husband, Gubitz said “We hadn’t even discussed what we were doing yet, but he overheard our conversations and said ‘You’re dealing with this in other people’s lives, can we discuss this ourselves too, please?’”

Gubitz and her husband Matan BenYishay, who works with the homeless, had planned a wedding for May 24. Instead, they married on July 26 with none of their parents present and about 12 friends and some siblings in a socially-distanced ceremony.

On their original wedding date, they did many of the ceremonial elements for their wedding guests on Zoom, but didn’t actually marry since they still couldn’t obtain a license.

One thing Gubitz and Perolman offered in the workshop was that if couples were postponing, they should still mark their original date with some kind of ritual. 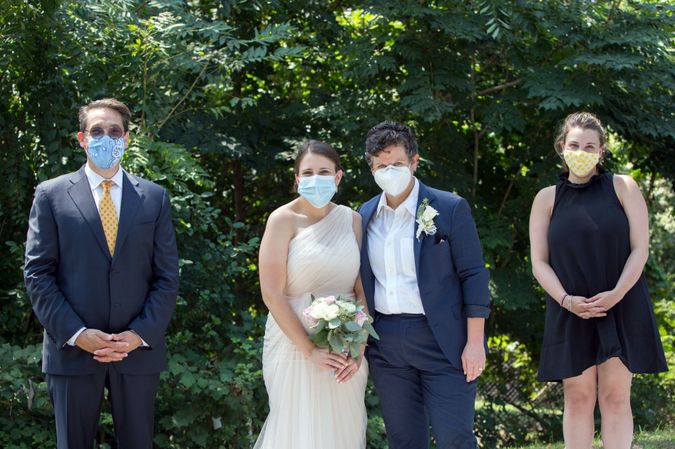 “You chose that day for a reason,” said Gubitz.

In Perolman’s case, her wedding with now-wife Liz Glazer, a comedian, was upended not only by the coronavirus. They were supposed to wed Aug. 9, and had sent their 310 guests an email informing them that they were still hashing out the plans, when Glazer’s father died unexpectedly in May.

Glazer came East to sit shiva and the day after shloshim, the traditional 30-day mourning period, the couple married in a private civil ceremony, telling no one.

“The most important thing was that we were healthy and together,” said Perolman, noting that they did it sooner both for health insurance reasons, and for visiting rights in the hospital, should one of them fall ill.

On their original date, they had a Jewish ceremony officiated by Perolman’s colleagues Rabbi Matthew Gewirtz and Cantor Lucy Fishbein, with only their parents present. The next day, they held what they called a “L’chaim” with 400 people watching on Zoom, where their siblings toasted them, they had their first dance, and all their guests had a massive Zoom dance party.

Both Gubitz and Perolman had spent significant time thinking about the “wedding industrial complex,” and how, as Perolman said, so many people, especially women, have such high expectations for this one day.

“This really gave us an opportunity to see how we deal with things we didn’t expect,” she said. Speaking of the pandemic, though, Perolman offered that throughout the span of Jewish history there have always been difficult times, and yet people always found ways to ritualize celebration.

“It wasn’t easy for us to get married with three living parents when there was supposed to be four, but pushing yourself forward into joy is what allows us to have an integrated life,” she said. “The pandemic isn’t something to be buried in the annals of history, rather this is what life was and we found a way to celebrate through it.”

Gubitz pointed out that the chuppah, as a not-steady structure, itself represents the fragility of life. Couples who chose to wait it out could use that time to invest in their relationship, like by going to couples counseling to improve their communication skills.

Both women have also officiated at weddings since the pandemic began, both virtually and in person. Both said they did slightly modified versions of what they do normally, with Gubitz saying that she specifically looked into the camera and told those watching at home, “You’re not just watching TV or Netflix now, you are present with us and we are so sad you can’t be here.”

She felt it was important to name the obvious but not dwell on it.

Furthermore, she now believes every couple getting married in the future should stream their wedding for their guests who can’t make it in person.

Perolman agreed that it was important to acknowledge the sadness, adding, “for a lot of couples, figuring out how to have their wedding in this time has been a relationship achievement. I’ve used this as the well you’re going to draw on, when there are tough times to come.”

Gubitz cited a Talmudic story that describes a funeral procession being rerouted for a wedding procession. Joy shouldn’t be postponed, she said, even if it looks different.

That was the decision that Miriam Nehama Ani and Brandon Waloff of Oakland, came to, but only after both sets of parents gave them their blessing to have their wedding on the opposite coast from their families, with about 10 people present. Even their officiant, Rabbi Adina Allen was remote, officiating from her home in Berkeley, while the couple were at a relative’s backyard some 40 miles away. 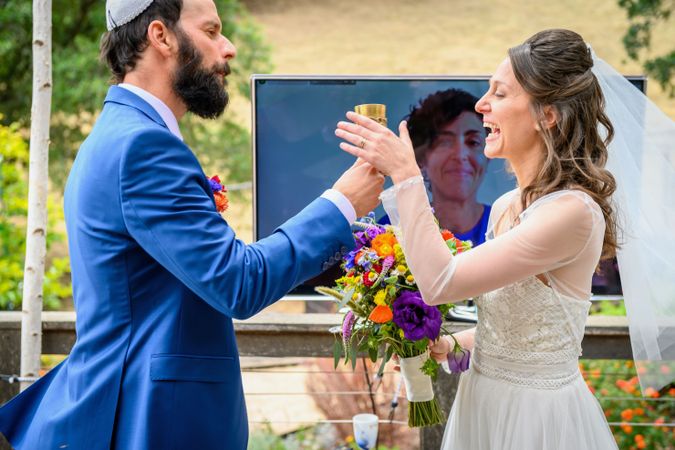 Rabbi Adina Allen officiated the wedding of Miriam Nehama Ani and Brandon Waloff from her home. Image by Éli Zaturanski

In normal times, Allen has the couple face outward during the ceremony to take in those who are witnessing them. In this case, it took the couple five screens to scroll through images coming from 167 computers and phones.

“I had a fear it would feel like a farce,” Ani said, “and that we’d feel like we were pretending at something. But it was magical. I felt we were both radiating joy, and it was truly profound to feel that loved and celebrated. Even on Zoom, it didn’t take away from it.”

How these couples solved the pandemic Jewish wedding dilemma: to wed or wait?