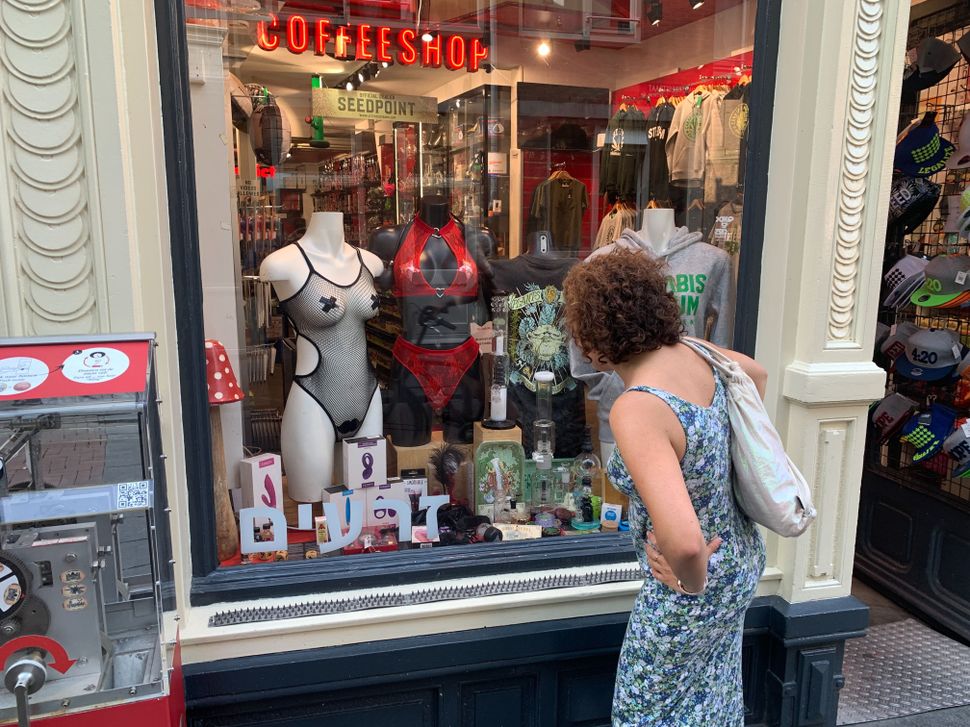 Will the pandemic lockdown inspire Amsterdam to purge the sex and drugs from its historic core and focus more on its Jewish cultural heritage? Some natives hope so — but not necessarily the Jewish community.

Like most of its European neighbors, Holland closed its borders during the early stages of the coronavirus pandemic along with its schools, restaurants, museums, and its notorious tourist magnets: weed shops and brothels.

As soon the country re-opened in mid-June, thousands of tourists from surrounding countries poured into the compact city center. Already in July, hotel occupancy spiked up from 10% of capacity to 50%. But for some locals, the post-lockdown period is not attracting the tourists they had hoped for. 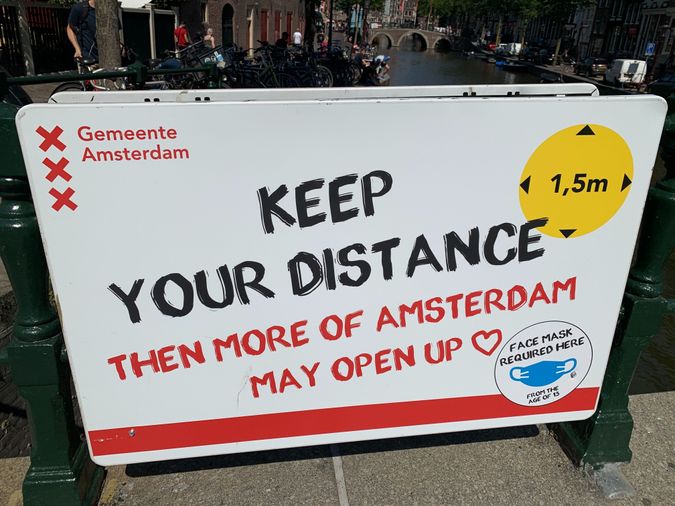 “Keep Your Distance” sign in Amsterdam Image by Orit Arfa

“The lockdown was great because there were no more tourists…there was zero tourism,” said Bernadette de Wit, a blogger and journalist who lives in the Red Light District, historically known as De Wallen. She witnessed Amsterdam tourism surge to a whopping 19 million visitors per year in 2019. “So for the first time after 10 years, we could enjoy our neighborhood again,” she said.

Locals described meeting their neighbors for the first time, and leaving their canal-lined homes without running into masses of often dazed or drunk foreigners.

Sitting at a cafe along a canal, the smell of weed creeping to the table from pot smokers nearby, de Witt pointed out that tourism is back, almost to pre-pandemic levels. 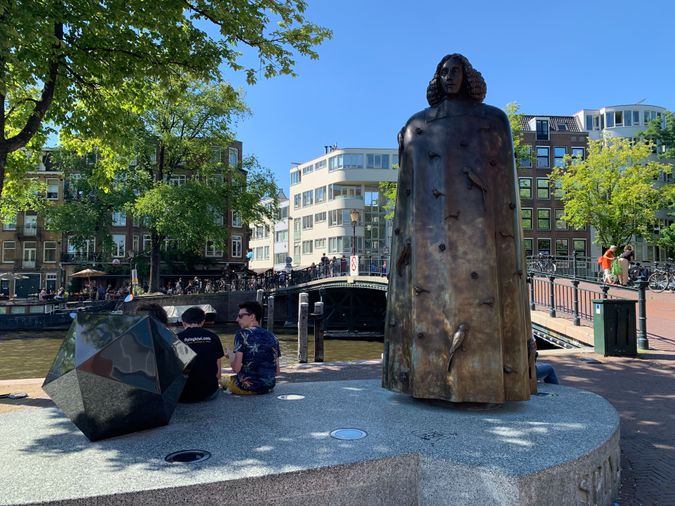 Amsterdampartners, a non-profit in the public-private sector that offers city guidance to visitors and the media, discourages journalists from promoting the Red Light District, since foreigners frequenting the sex and drug establishments, particularly young British tourists, draw complaints about noise, litter, and misbehavior.

“We know from experience that, unfortunately, this quarter is often used as a mere backdrop for their ‘fun party weekend,’ and the people often erroneously believe that in Amsterdam ‘anything is allowed,’” said Marieken Penders, the organization’s international press officer. She proudly directed this reporter to the Jewish Cultural Quarter, which has seen a ticket sales downturn of 70% in recent months.

During Amsterdam’s Golden Age from the late 16th to 17th century, when city leaders founded the world’s first multinational known as the Dutch East India Company, former Marranos from Portugal found a home along the canals of the historic Jewish quarter. They practiced their religion freely, giving Amsterdam a reputation as Europe’s most tolerant, liberal city.

Its iconic symbol is the majestic and active Portuguese Synagogue, a centerpiece of the Jewish Cultural Quarter along with the Jewish Historical Museum and a national Holocaust museum currently being renovated.

But according to Esther Voet, editor of the weekly Jewish newspaper, Nieuw Israëlietisch Weekblad, the city, in seeking to discourage tourism, is keeping visitors away from Jewish sites as well.

“We are dealing right now with a very left-wing town council, and they are, anyway — whether there is a corona lockdown or not — trying to diminish the tourists here in Amsterdam,” she said in a telephone interview. New housing regulations and increased parking fees make the city center less inhabitable for low-budget tourists and residents.

Voet lives about a mile away from the Red Light District near the Anne Frank House, which attests to the tragedy that befell the pre-WW2 population. Close to 80,000 Jews lived in Amsterdam before the Nazis deported and murdered some 80%. Voet would often see Israeli and kippah-clad tourists waiting in line for the House up until the lockdown. It’s now fully booked for weeks to come, but that’s because all museums must abide by coronavirus-based quotas.

“My neighborhood is pretty popular with Israelis, and now I seldom hear the language,” Voet said.

Although, judging by some signage, not all Jews come for the cultural heritage. Coffee shops and strip clubs advertise in Hebrew. “Seeds here” and “Live sex onstage” can be spotted in the Biblical language. 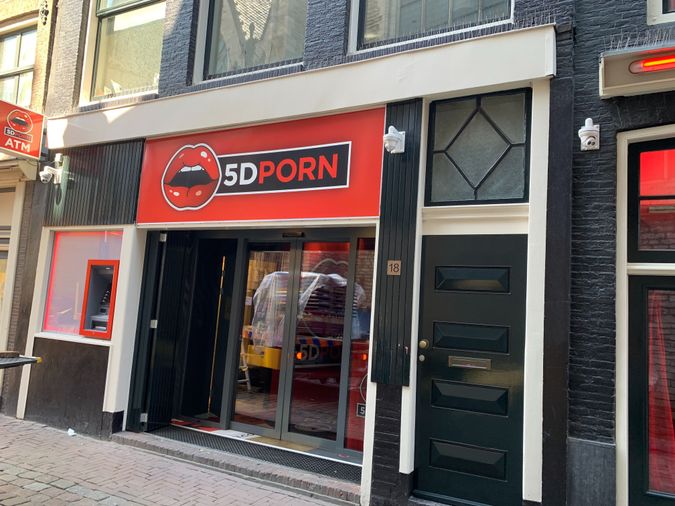 Amsterdam prostitution dates back to the 14th century, just like its oldest standing church, the Old Church, the patron church of sailors — who also patronized the prostitutes.

The church, ironcally or appropriately, is located directly across from the Prostitution Information Center. But de Wit believes today’s sex workers are a far cry from the harbor city’s historic prostitutes who worked in discretion in closed brothels. Today’s sex workers consist mostly of women from poor Eastern European and Latin American countries who parade their lingerie in windows not shielded even from children. About 40% of the European prostitutes fled during the lockdown, but most are returning.

Numbering about 25,000, the Amsterdam Jewish community is largely disconnected from the Red Light District debate, said Voet. Most have moved southwards, away from the center, and the dilapidated tenements of the Renaissance-period Jewish quarter have been demolished to make way for Amsterdam’s City Hall. But for private individuals, as opposed to state-funded museums, like the Jewish Cultural Quarter, the lack of tourism is troubling.

“The Jewish community wants tourists, especially Jewish tourists,” Voet said. “For example, all the businesses—the food business and Jewish restaurants—really hate the fact that we don’t have tourists right now.”

In the tradition of the city’s tolerance, she believes the Red Light District should remain given its traditional place in Amsterdam and the tourists it brings, johns and Jews alike. What annoys her most about the current crop of tourists is that some flout social distancing guidelines.

“If people are going to live there because it’s a very beautiful area and start complaining about the prostitutes, then live somewhere else,” Voet said.

De Wit, on the other hand, had hoped the pandemic would reset Amsterdam’s tourism landscape, but City Hall, she said, is stalling. In the meantime, she’ll do her part.

“If I walk through my neighborhood and see an elderly Italian couple with a tour book in their hand and they ask about the Jewish Historical Museum or the Hermitage, I’ll happily take them there. I’m so service oriented,” she said. “But if tourists form the wrong type of tourism, from overtourism, ask me about the coffee shops—’I want to smoke a joint’—or they ask for the window prostitution, then I send them the wrong direction.”