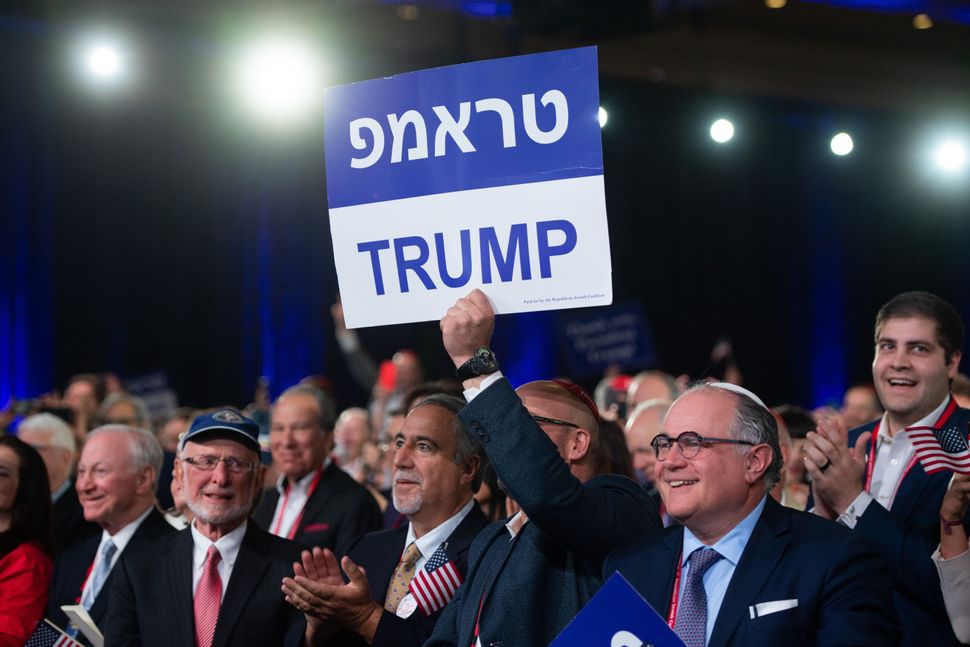 President Donald Trump’s critics — led by the Anti-Defamation League — say he failed to condemn white supremacy during the Sept. 29 debate, and then gave a shout out to a white supremacist group, the Proud Boys.

Many of his Jewish supporters just don’t see it that way.

“White supremacists?” said Ruth Reinish, 88, of Boca Raton, Fla. “He could have answered that question, but he skirted the answer, and that was ok.”

Some, like Reinish, found his response insufficient, but also insignificant. Others maintain that there were good reasons for it, or that Trump did indeed offer the condemnation solicited by debate moderator Chris Wallace. Either way, they’re almost all sticking with the president in 2020. “I’m voting straight Republican,” Reinish said.

Jews for the most part vote Democrat: In the last two presidential elections, Barack Obama and Hillary Clinton captured about 70% of the Jewish vote.

For Republican-voting Jews, including Orthodox Jews who favor Trump, Israel tends to be a major issue in national elections. And Trump’s administration has given Jews that place Israel high on their list of voting priorities several things to be happy about, from moving the U.S. embassy to Jerusalem to helping orchestrate rapprochements with Bahrain and the United Arab Emirates.

Chris Wallace: “Are you willing, tonight, to condemn white supremacists and militia groups and to say that they need to stand down…” Trump: “Proud Boys, stand back and stand by! But I’ll tell you what, somebody’s got to do something about antifa and the left.” pic.twitter.com/4vrPocKzcu

Among those supporters are some who say Trump handled the white supremacy question just fine.

Menken said that Trump got in his own way by being too eager to talk about antifa — a loosely organized network of leftists that advocate physical resistance to far right extremist groups — and that it was only a slip of the tongue that led Trump to say “stand by” to the Proud Boys instead of “stand down,” the phrase that Wallace used. Menken suggested that if Wallace had pressed the issue, Trump would have condemned white supremacist groups again.

But Menken said that it’s beside the point, since Trump has already condemned neo-Nazis and white supremacists. During the exchange with journalists in August 2017, in the wake of the Charlottesville riots, when Trump said that there were “very fine people” on both sides the fighting, he also referred to neo-Nazis and white nationalists as “rough, bad people,” and said they “should be condemned totally.”

“This idea that a guy who condemned white supremacists a dozen times needs to do so again, it has a dog and pony aspect to it,” Menken said.

Matt Brooks, executive director of the Republican Jewish Coalition, also pointed to actions Trump has recently taken against far right extremism. Last week, Trump said he would designate the Ku Klux Klan (as well as antifa) as a domestic terrorist group during his second term, something he also promised to do in 2019.

“That is not the action of someone who doesn’t understand the threats we’re facing with white nationalists,” Brooks said, while acknowledging that Trump could have answered Wallace’s question better by just pointing to his “strong record.”

IMPORTANT!!! ANYONE TWEETING OUT TODAY WHO QUESTIONS WHERE THE PRESIDENT STANDS, HERE IS YOUR ANSWER. https://t.co/Bmj2u6jiyZ

Yet as reporters and the Anti-Defamation League have noted, the far right, especially the Proud Boys themselves, understood Trump’s words as a pledge of camaraderie. They celebrated the remark in chat rooms and on social media, taking the phrase “Stand back and stand by” literally.

The ADL calls the Proud Boys “violent, nationalistic, Islamophobic, transphobic and misogynistic,” and several prominent members in the group, including its founder, Gavin McInnes, have made anti-Jewish and Holocaust-denying comments.

The Proud Boys are ecstatic tonight about getting mentioned in the debate tonight. “Trump basically said to go fuck them up! this makes me so happy,” writes one prominent Proud Boy. pic.twitter.com/hYA7yQVAOn

Brooks said that the Proud Boys’ reaction has nothing to do with Trump’s record of denouncing far right groups in other moments.

“People take and hear things the way they want to hear it,” Brooks said. “If they think this president is soft on white nationalists, they’re mistaken.”

Some conservative Jews were less happy with Trump’s performance. They said the debate was a missed opportunity for the president to project leadership, and that he let Joe Biden come across as the more serious and compassionate candidate — but their support of Trump is still strong.

Among conservative Jews in Florida, where a tight race has made the Jewish community a strong focus of Democratic campaigning, Trump was received as the winner, if a battered one.

“Being presidential matters, and I’m a big Trump fan, but the fact is that he was not presidential” during the debate, said Sidney Dinerstein, the former chairman of the Palm Beach County Republican Committee. “He would have been better served had he spoken quietly about his accomplishments — and had he not kept interrupting. Biden would have said enough dumb things for people to realize he is not capable of being president.”

“He is bombastic and I think he took control over the program,” said Joan Chasin, a resident Boca Raton, Fla. who runs a cleaning and janitorial supplies company. “People say he should have given Biden a little more time so he could screw himself up, but I thought it was pretty good.”

They said that their support for Trump was strongly tied to Trump’s policies supporting the Israeli government, including the recent rapprochements between Israel and Bahrain and the United Arab Emirates, which his administration helped work out.

“Trump and the Republicans have a great story to tell, from the economy, to Israel, to the coming Nobel Peace Prize – it’s a great story,” said Dinerstein. (Some have suggested Trump should receive a Nobel Peace Prize for his administration’s efforts to orchestrate peace agreements with the U.A.E. and Bahrain.) “But it has to be told in a better, more measured way than a couple of people yelling at each other for an hour-and-a-half.”

Yet at least one Jewish Republican found that the debate completely changed their mind about Trump.

Isaac Yomtovian, a developer in Akron, Ohio, who has served on the Central Committee of the Republican Party of Cuyahoga County, said that he was so disgusted by Trump’s failure to condemn white supremacists, as well as his calls to his supporters to insert themselves into the vote counting process, that he decided to vote for Biden instead.

Yomtovian said his opinion changed in real time, as Trump shifted his answer to Wallace’s question about white supremacist groups.

“‘Stand down,’ that’s good. But then he said ‘stand by,’” Yomtovian said. “The guy is inviting white supremacists to get off their ass and come to the streets and start a civil war.”

Yomtovian said he will likely vote Republican in every other down-ballot race — and that his friends and family in his Persian Jewish community across the country will likely continue to support Trump, because their number one issue is Israel, even if they consider him a boor or a bully.

But Yomtovian said he no longer can make that compromise.

“I can’t accept that anymore,” he said.