‘They’re out to get us’: Social media campaigns reflect tensions between Orthodox and local authorities 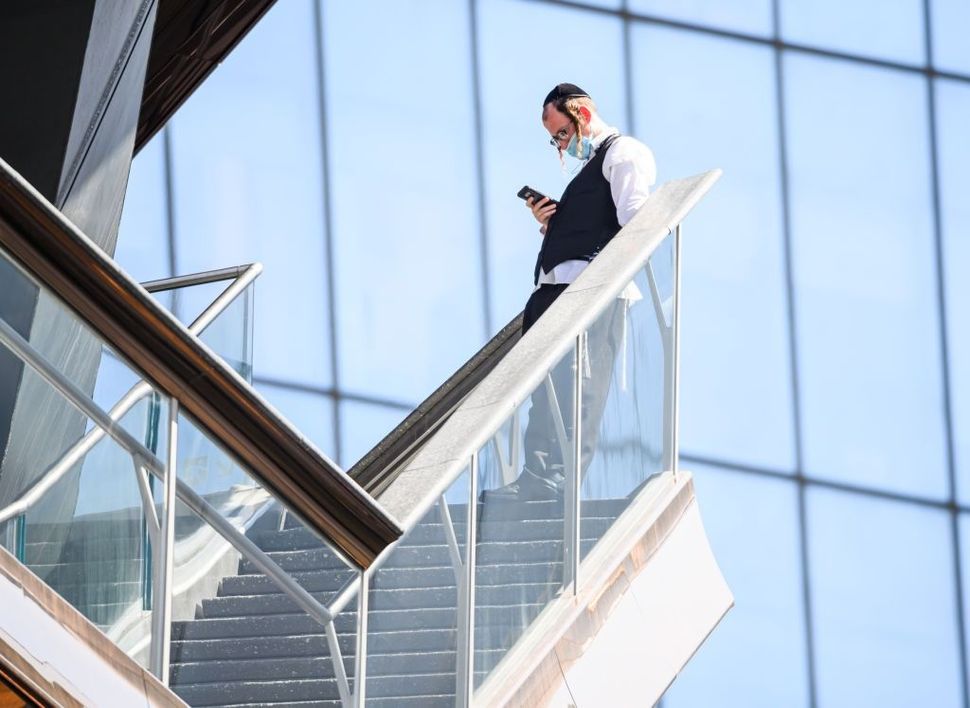 A visitor at Hudson Yards Image by Getty Images

Heshy Tischler, a Borough Park-based activist and radio host, posted a picture of himself on Instagram wearing a mask with a picture of a yellow Jude star pasted over it.

“I am wearing my mask with the Jewish star that our leaders and city officials really want us to wear,” he said.

The post is provocative and outrageous — traits Tischler is well-known for — but it reflects growing resentment in many Orthodox communities toward New York state and New York City health authorities. Some Orthodox Jews are accusing officials of unfairly targeting their neighborhoods amid an uptick in COVID-19 cases.

Alongside rampant misinformation, memes have circulated on Orthodox social media and WhatsApp groups drawing the same comparison Tischler did — a parallel first suggested by a GOP official in Minnesota.

“If we comply they will let us keep our shuls open.”

“It’s just a little inconvenience to put it on.”

“If we show them that we’re giving in they will stop bothering us.”

Which one of these are these statements referring to? pic.twitter.com/5Tc141eZce

These tensions with authorities may have peaked back in April, when Mayor Bill De Blasio lashed out at Hasidic Jews for not socially distancing at an outdoor funeral, while shortly afterward supporting crowded Black Lives Matters protests. “My message to the Jewish community, and all communities, is this simple: the time for warnings has passed,” he tweeted at the time. “I have instructed the NYPD to proceed immediately to summons or even arrest those who gather in large groups.” In turn, internal messaging in the community has become increasingly suspicious of authorities, from guards being set up outside wedding halls to ward off city inspectors, to notices calling to downplay virus numbers in order to prevent school shut-downs.

In a statement on Tuesday, New York City’s Department of Health reported nine zip codes which are experiencing an “alarming rate” of positive cases — seven of the nine are largely Orthodox neighborhoods.

Despite the data, community members claim they are being unfairly targeted by both government authorities and media, and have made this alleged bias a focus of their activism. This week, videos surfaced of TV news crews in Borough Park and Monsey, sparking outrage from locals that journalists were seeking to catch non-compliance.

What you won’t see on the evening #FakeNews: majority of my constituents wearing masks.

What you will see: TV cameras waiting for an Orthodox Jew not wearing a mask so they can reinforce their biased narrative.

“Our community is being singled out and terrorized, while our ‘lobbying’ organizations main focus is maintaining cozy relationship [sic] with Albany,” wrote one commenter y_blum97, on Tischler’s picture on Instagram. “Heshy is standing up for the true marginalized [sic]…if De blasio ordered the removal of yarmulkes most Jews would follow with the misguided excuse ‘we can’t make a chillul hashem,’” referring to the Hebrew term for the ‘desecration of God’s name.’

“The Jews are being targeted,” wrote one commenter named Aviva. “De Blasio is a poisonous anti-Semite.”

To be sure, many don’t agree with Tischler’s rhetoric. Many community members commented in outrage over his use of Holocaust imagery. “How can you post something so horrible,” one person wrote. ”Leave the Holocaust out of this where people were starved and murdered. Wear a mask for heaven’s sake.” (Tischler’s response: “left pig Biden voting idiot please don’t contact me anymore you hater.”)

But Tischler’s allies from prior efforts did not go along with his latest stunt.

While still pointing fingers at local government for failing to communicate with their own constituents, the Haredi officials who had taken part in the June playground stunt have now turned to begging community members to take precautions, in an op-ed in the newspaper Hamodia.

“The positivity rates in our community are higher than in most of New York City,” wrote State Senator Simcha Felder, Assemblyman Simcha Eichenstein, Assemblyman Daniel Rosenthal, Councilman Chaim Deutsch and Councilman Kalman Yeger. “This is an undebatable, scientific fact.”

Yet the resentment that Tischler’s outrageous post captured is real — it is widespread, and is being echoed (albeit with far more nuance) from the community’s leadership.

In a letter on September 27 from Rabbi David Zwiebel, executive vice president of Agudath Israel, to the NYC Health Commissioner, the organization blasted the Department of Health for “singling out Jewish schools and areas” and for failing to build trust and collaborate with community leadership in order to ensure better compliance.

Zwiebel promised that Agudah would do its “best to encourage cooperation and best practices within the community.” (That promise came just days after Agudah leaders met leading Haredi rabbis in offices in Lakewood, N.J., with no masks or social distancing. The photographs of the September 23 meetings were shared on Facebook and later deleted.)

“The contact tracers we have worked with have often been unprofessional and, to be blunt, ignorant of our community,” Zwiebel wrote. “They are in dire need of cultural sensitivity training if there is any hope of them being effective.”

Many local community leaders also allege unfair treatment. Some point to distinctions between the city and the state’s handling of yeshiva day schools with positive cases. In the city’s Far Rockaway neighborhood, the Torah Academy for Girls was shut down by the city’s Department of Health after several positive cases emerged in different classrooms. Meanwhile,in neighboring Nassau County, yeshiva day schools were permitted to remain open, and only quarantined those children who came into direct contact with positive cases.

“Closing down Far Rockaway yeshivos that are a model of responsibility sow distrust & make it very tough for school leaders to work with you,” activist Chaskel Bennett tweeted at Mayor De Blasio. “If cooperation & collaboration are seen as a one way street, then the very people you need to buy in, won’t. Trust is everything.”

Others are balking at medical experts, too. In the Five Towns, some community members have launched a campaign against Dr. Aaron Glatt, an Orthodox physician who puts out regular COVID-19 warnings and updates.

“If New York and New York City aren’t Czarist Russia, they sure are starting to feel like Communist Russia!” an unsigned open letter from Five Towns residents said. “Our civil liberties are being stripped from us.”

“It’s unfortunate that sometimes there’s a mistrust of both authorities and public health officials, that parallels secular society,” said Rabbi Dr. Glatt in response. “There’s been some history that’s not very positive between the Department of Health and the Jewish community. It leads to a sense of mistrust, of doubt, and of ‘they’re out to get us.’”

‘They’re out to get us’: Social media campaigns reflect tensions between Orthodox and local authorities