With Cuomo on warpath, Orthodox Jews worry that COVID-19 shutdown will backfire 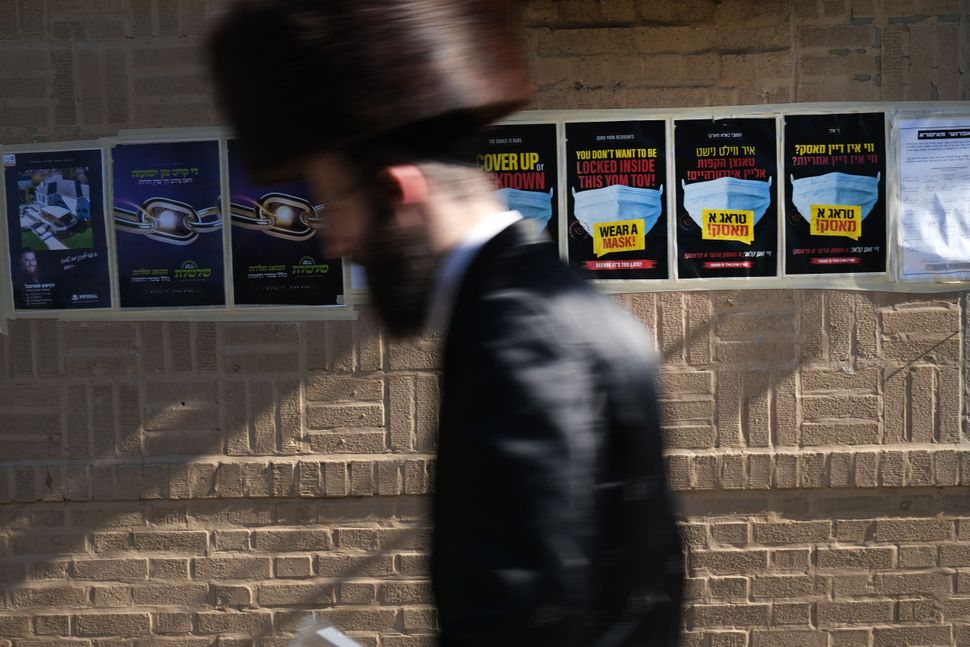 Orthodox leaders say they are being unfairly targeted by de Blasio’s and Cuomo’s bold approaches — and confrontational rhetoric — in the leaders’ quests rein in the virus’ spread in Orthodox communities before it can spread to the rest of the region.

“I think there’s going to be civil disobedience,” said Yitzchok Frankfurter, the publisher of Ami Magazine, the widely read Orthodox monthly. “These people have a lot of children and they’re living from paycheck to paycheck. How does the mayor intend to compensate them?”

On Monday, Cuomo issued a stark warning to Orthodox leaders, saying that unless they agreed to abide by state rules meant to stop the spread of the virus — including capping all prayer services and religious gatherings at 50 percent capacity, and strictly enforcing six-foot distancing and mask wearing in schools and synagogues — he would shut down their religious institutions. He said he plans to meet with leaders from communities in the city and in upstate New York on Tuesday.

Cuomo did not approve of the entire shutdown plan proposed by de Blasio on Sunday, which covered nine ZIP codes in Brooklyn and Queens with high rates of positive coronavirus tests, including several areas with large Orthodox communities. De Blasio announced the shutdown proposal amid deepening concern over the rates of infection in those areas, which are in some ZIP codes as high as six percent; the state’s overall rate is about one percent.

Yet de Blasio announced that he would still close nonessential businesses Wednesday, generating considerable concern among local business owners who in many cases had only recently begun reopening their businesses.

The school shutdown will affect 100 public and 200 private schools across the city. The nine zip codes in his shutdown plan include 7% of the city’s population, but represent 20% of the recent positive coronavirus tests.

While the shutdown plan affects ZIP codes with racially and culturally diverse neighborhoods, including Borough Park, Flatbush, Sheepshead Bay, Kew Gardens and Far Rockaway, Cuomo and de Blasio have identified the Orthodox community as the source of the spike in cases.

“These have been going on for weeks,” Cuomo said, referring to crowded Orthodox prayer services. “You don’t see masks, and you see clear violation of social distancing.”

The community has been quick to highlight failures and slip-ups on the government’s part. Orthodox leaders expressed frustration with what they describe as hypocritical policies or spotty evidence underpinning the virus spread prevention strategies.

Don’t have the heart to tell the Mayor that many parents in these zip-codes actually send their kids to schools OUT of these zip-codes. https://t.co/YIIjwLQ8Kw

Last month, Agudath Israel, the Orthodox umbrella and lobbying organization, excoriated the city for having contact tracers who were “unprofessional” and “ignorant of our community,” and only a small handful of whom spoke Yiddish, the only language of thousands of Hasidic Jews in Brooklyn.

On Monday, Hasidic figures on Twitter were quick to jump on an error in Cuomo’s presentation: A picture that he said showed an unlawfully large gathering of Hasidic Jews from recent weeks turned out to be a picture of a major rabbi’s funeral in 2006. (The picture was changed, without informing reporters, during the press conference.) 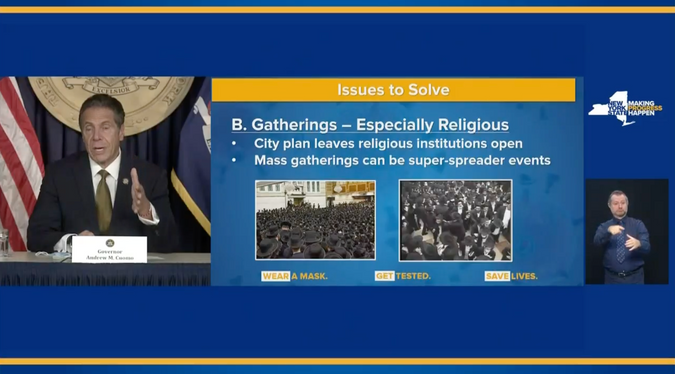 Cuomo used photographs of Hasidic religious gatherings to point out lax adherence to state rules — and lax enforcement of those rules — within the Orthodox community. Image by YouTube/screenshot

Amber Adler, an Orthodox Jewish candidate for city council from the Midwood area of South Brooklyn, said that Cuomo’s comments and the slide with the mislabeled picture fed into an image of Orthodox Jews as being complacent and unconcerned with the virus.

Adler said that Orthodox Jews in her area, which is facing school and business closures, have been constantly messaging one another on WhatsApp to stay on top of positive tests in their social circle. They keep track of classes at yeshivas that have had to quarantine after a student was exposed to someone with the virus.

“There’s never been a point where people haven’t been being proactive,” she said.

While Cuomo has long been close to the Orthodox community, de Blasio’s relationship is shakier now after years of support. The rupture started in April, when many in the community felt that he unfairly targeted them after shutting down a crowded funeral procession in Williamsburg which local police officers helped plan.

Frankfurter suggested that de Blasio is focusing on the Hasidic community to take scrutiny off of himself.

“Should I call it scapegoating the Jews?” Frankfurter said. “I don’t want to go that far. But it’s something you can take into consideration.”

Frankfurter added that he believes everyone in the Hasidic community must comply with city and state rules meant to slow the spread of the virus. “Lives are at stake, and people should listen,” he said.

“Collaboration, awareness, communication carry the day,” said Yossi Gestetner, the co-founder of the Orthodox Jewish Public Affairs Council, a group that uses public records and demographic information to counter negative narratives about the Orthodox community. “Being antagonistic, poking the eye, all it does is it shuts people out.”

Yeruchim Silber, the director of New York government relations for Agudath Israel, said that the community is frustrated that the government’s answer is blanket closures, instead of attempting to shutdown specific schools, synagogues or businesses that are driving infections.

“Some of the schools that were told that they did everything right, but they’re being closed because of the community surrounding,” Silber said. “It sounds somewhat arbitrary.”

For some in the community, the testing rates themselves are suspect: They wonder if the rates of positive cases are high because the people going for tests are predominantly people with symptoms.

Yaacov Behrman, an activist in the Chabad community in Crown Heights, suggested that Hasidic Jews will respond to the lockdowns not by changing their behavior, but by not getting tested, in order to avoid driving up positive test statistics.

B) There will be an added shame factor to those that test positive C) We will essentially be punishing good behavior. People will be punished as a result of testing. We need to reward good behavior and not punish. (2)

Gestetner said he was skeptical that the spikes were as significant as the statistics suggest, because there is no state metric for rate of positives based on random testing to compare it to, only the state’s average of positive rates for volunteer tests.

Orthodox Jews who spoke to the Forward acknowledge that the rise in cases is concerning. Some within the community have highlighted large weddings held toward the end of the summer, as well as large High Holiday services, as helping seed the current spikes.

The community is also getting mixed messages from some quarters: Shulem Lemmer, a singer who is the first Hasidic musician to sign a major record deal, announced last week that he was partnering with New York City’s health department to “bring awareness of anything Covid-19 related to the Orthodox Jewish community and beyond.” Yet on Sunday he posted videos to his Instagram page of him dancing with an elderly rabbi in a room of at least 20 men and boys, none of whom were wearing masks. (Lemmer did not respond to a request for comment.)

Some in the community are still convinced that Orthodox Jews achieved “herd immunity” from the coronavirus, an idea that health experts say is erroneous.

“There’s no question that there was some complacency,” said Silber. Now, however, “There’s a widespread consensus that we’ve got to do more to get the numbers down.”

Whether there will be broader shutdowns in the Orthodox world — including in the Hasidic hubs in Orange and Rockland County, which have considerably higher positive coronavirus test rates than anywhere else in the state — depends on how Orthodox leaders respond to Cuomo in their meeting Tuesday.

Silber said that he expects the Orthodox leaders to be ready to listen, even with Cuomo on the warpath.

“The conversations that he has — they’re always respectful, and there’s always a healthy give and take,” he said.

With Cuomo on warpath, Orthodox Jews worry that COVID-19 shutdown will backfire