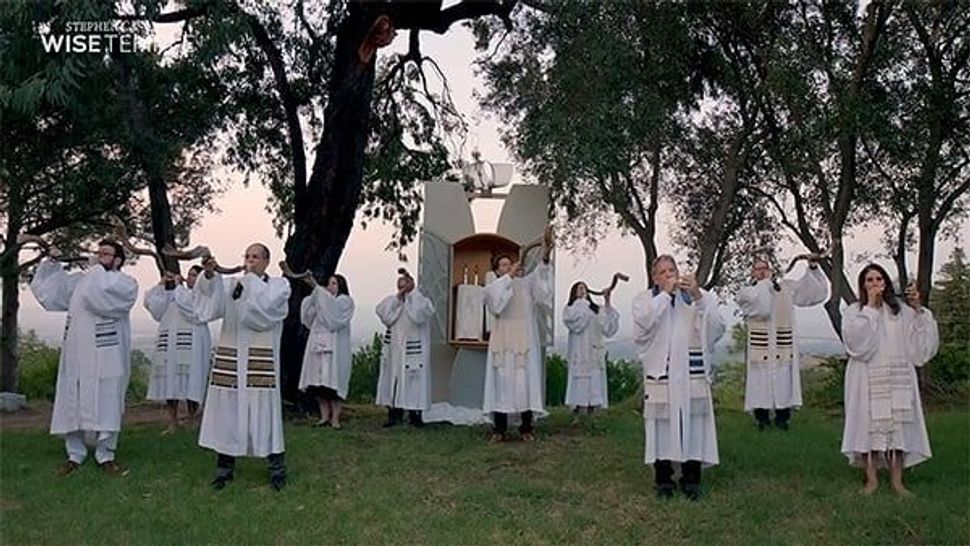 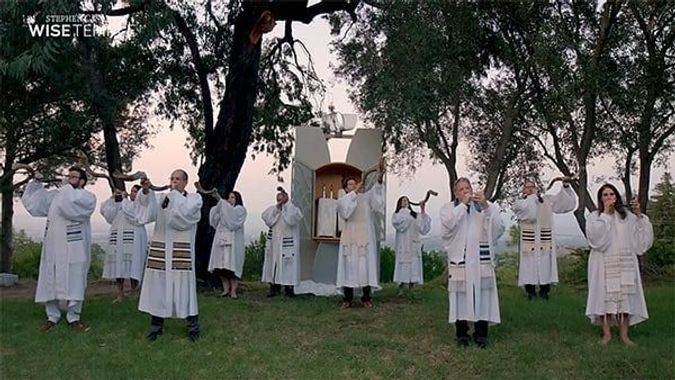 I am not a rabbi — but am I proud of my colleagues who are. Along with cantors, soloists, educators, executive directors, board donors and laypeople in hundreds of congregations and spiritual communities, they pulled off one of the most extraordinary historic pivots in synagogue life.

“This is epic,” Rabbi Steven Leder of Wilshire Boulevard Temple in Los Angeles told me. “We, all of us, were handed a ball we didn’t expect, and we in the synagogue community delivered, we stepped up to this moment.”

That is an understatement. For organizations steeped in tradition, it has never been easy for synagogues to embrace change. At the Synagogue 2000/3000 synagogue transformation conferences I organized from 1995-2015, I often joked that the aphorism inscribed above the Holy Ark on many synagogue pulpits – “Da lifnei mi atah omeid” (“Know before Whom you stand”) – should instead be – “But, we’ve always done it that way!”

Yet, the COVID-19 pandemic forced seismic changes upon synagogues in March that were unthinkable a month earlier.

Congregations that were barely live streaming worship services suddenly had no choice. Resistance to shortening services, particularly in the Conservative Movement, mostly melted away when it became clear that people would not be able to sit in front of a screen for hours on end. All programming was moved online in a nanosecond. Teachers, many of whom had no training in distance learning, were forced to learn unfamiliar skills and strategies. When it became clear the virus was not magically disappearing, synagogue leaders began planning for the biggest events of the year, the High Holidays.

I eagerly awaited what they developed and when Rosh Hashana arrived, I found myself dipping into services at dozens of synagogues throughout North America. Just the thought that virtually every one of the more than 2,000 congregations in the Conservative, Reform, Reconstructing Judaism, Jewish Emergent Network, ALEPH/Jewish Renewal, and independent minyanim offered some form of online worship was mind-boggling.

I knew what was possible; years ago when I was very sick on Yom Kippur, I tuned in to Rabbi Naomi Levy’s pioneering live stream from Nashuva in Los Angeles which attracted tens of thousands of participants and loved it. But now, everyone had no choice but to hit the internet. The variety, quality, and creativity on display was spectacular. By all accounts, the sheer number of people who participated in these experiences, either live streaming or through archival views on the most popular distribution platforms – Facebook Live, YouTube, and congregational websites – was far beyond what would have been expected if services were held in person. Now that the holidays are over, I asked a number of synagogue leaders to reflect on the lessons learned.

“We learned that creating intimacy and connection is not just about size or proximity,” Rabbi Angela Warnick Buchdahl of Central Synagogue in New York City said. “In some ways our community felt smaller as we had members reading Torah and sharing stories from their living rooms, and in other ways, we were reminded of our global Jewish family as we were able to have prayers and songs read from friends in Australia and Jerusalem.”

The variety of “production values” on display ranged from a couple of static cameras to the productions of Park Avenue Synagogue in New York and Temple Israel in West Bloomfield, Michigan, which were Hollywood-caliber television complete with multiple cameras, lighting, and professional direction.

Some services were totally live and other synagogues pre-recorded everything, rather than risk any technical glitches during live streams. Many decided on a hybrid combination of recorded pieces and live worship. Empty sanctuaries were turned into television studios; others featured clergy and Torah readers streaming in from living rooms or backyards. A few synagogues, like Congregation B’nai Tzedek in Potomac, Maryland invited small groups of congregants to sit socially distant in the sanctuary, led by masked clergy shielded by a Plexiglass-enclosed pulpit. 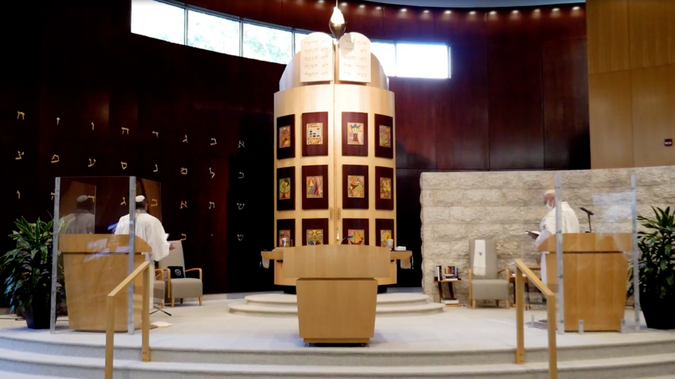 The creativity on display was inspiring and came from lay volunteers in small congregations to large synagogues with major clergy teams:

At Central Synagogue in New York City while the haunting melody of Kol Nidre emanated from a cello, a modern dance began the Yom Kippur afternoon service. 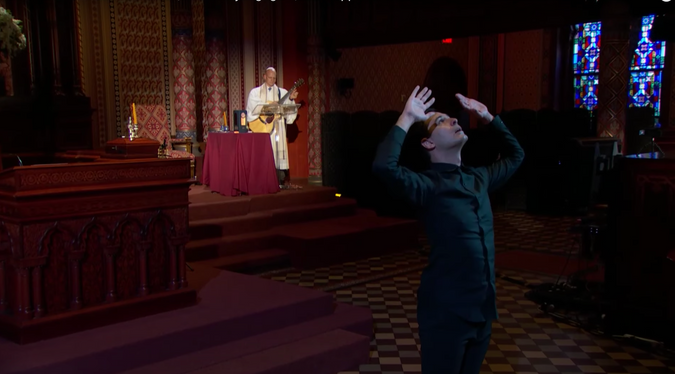 Rabbi Dan Zemel of Temple Micah in Washington, D.C., blew the shofar in front of the Lincoln Memorial, the Martin Luther King, Jr. Memorial, and at Arlington Cemetery. Services at Temple Sholom in Vancouver began with a video montage of Rabbi Dan Moskovitz bringing a Torah scroll to member’s homes.

Valley Beth Shalom in Encino, California created a “virtual lobby” before services with greetings from congregants and adorable preschoolers explaining the meaning of the holidays.

Sinai Temple in Los Angeles featured the Broadway and film actors Ben, Henry and Jonah Platt’s rendition of “Ahavat Olam” over a video montage of scenes from Israel.

Dozens of congregations offered “drive-by shofar blowing” in parking lots, while in Los Angeles a “Shofar Wave” sponsored by the IKAR congregation and the Jewish Federation of Greater Los Angeles with shofar blowers from more than 50 synagogues blasted notes through neighborhoods “from the city to the sea.” There were surprises: Yizkor memorial prayers at Stephen S. Wise Temple in Los Angeles recited while photos of those who died during the past year appeared on screen. A Neilah/Havdalah concluding service on Zoom that spotlighted families celebrating the ritual in their backyards. A guided meditation by Rabbi Elie Spitz at Congregation B’nai Israel in Tustin, California. A “gift basket” of ritual objects delivered from Central Synagogue to member’s homes for use during the services. At IKAR, Rabbi Sharon Brous and Melissa Balaban, IKAR’s chief executive officer, invited three comedians to warm up the crowd with a hilarious few minutes of banter: on Yom Kippur morning, one asked, “C’mon, be honest. How many people, by a show of hands, ate your toothpaste this morning?”

I was curious about how viewers would follow along. Some synagogues distributed prayer books, while a few featured a moving chyron of Hebrew, English and transliteration of the prayers on the screen – no book necessary. Liturgy and sermons were shortened to fit what most considered the outside limit of two-hour attention spans on screens. Rabbis accustomed to talking to large crowds were suddenly speaking directly into a single camera, an entirely new skill set not currently in the curriculum of the seminaries. Will one of these rabbis become the Jewish Joel Osteen or Joyce Meyer?

The synagogues faced a tough decision: do we offer the services for free or just for our members? Those congregations that offered full and free access to all their online offerings shattered the limitations of geographic location, some attracting viewers from around the world. Others, such as Wilshire Blvd. Temple in Los Angeles, after a long debate, created password-protected platforms for members only. “Membership has to mean something,” one synagogue president told me about the decision to limit the live stream to members. “But, the very next day, anyone could view our services posted on YouTube and our website for free.”

Funding these efforts was a significant challenge. There was no line in most synagogue budgets for “television production.” Even well-resourced congregations turned to generous donors to underwrite the costs that reportedly ran into tens of thousands of dollars for some elaborately produced services. As usual, during this prime time in the synagogue calendar, there were fundraising appeals. Yet, despite the success in attracting and engaging participants, rabbis and lay leaders told me that the pandemic has taken a toll on both membership numbers and the financial capabilities and contributions of many individuals and families, reminiscent of the impact on congregations during the 2008-2009 recession.

“People were stunned by the intimacy of the experience and by their ability to actually pray with a screen mediating their spiritual encounter,” said Rabbi Brous. “Most notably, people with mobility challenges told us how grateful they were to be able to access services from their homes and not have to fight for a seat.”

“On the whole, I would say it was an exhausting, draining, difficult, tricky and mostly triumphant substitution, but like all substitutions, not the real thing,” said Rabbi David Wolpe of Sinai Temple in Los Angeles:” I think we came through remarkably well, and I am very proud.”

Rabbi Moskovitz in Canada shared a bit of a secret. “I’m hearing again and again, in whispers, in I-hate-to-admit-it’ voices that many, many of our members enjoyed the service more from home than they did packed cheek to jowl in shul,” he said. “They could see and hear the rabbi’s sermon so clearly, they were not distracted by conversation, or people getting up from their seats.” Some will want shul delivered to their homes like a DoorDash meal, all packaged and ready to eat. For them, this may be a wonderful thing. For the future of the synagogue, I worry. But then again, we always worry.”

Was this a one-off? Will synagogues “go back” to their previous ways once the pandemic has subsided, or will they move forward to a new normal?

“There’s no going back,” Rabbi Ed Feinstein of Valley Beth Shalom in Los Angeles, California, said. “We’ve already contracted with the production company for next year. Even with a vaccine, there will be people hesitant to gather in large groups. I hope we can return to the relationship-building in-person services, but we will continue to offer live streaming. The response of our members has been overwhelmingly positive.”

That was the consensus from all of my interviews. I came away proud of how synagogues have stepped up to meet the moment, and I hope those who were touched by the services will be moved to step up and support the congregations. The pandemic has forever shifted the way synagogues reach their congregants and beyond their sanctuaries to a worldwide audience. And there is no going back — only forward.