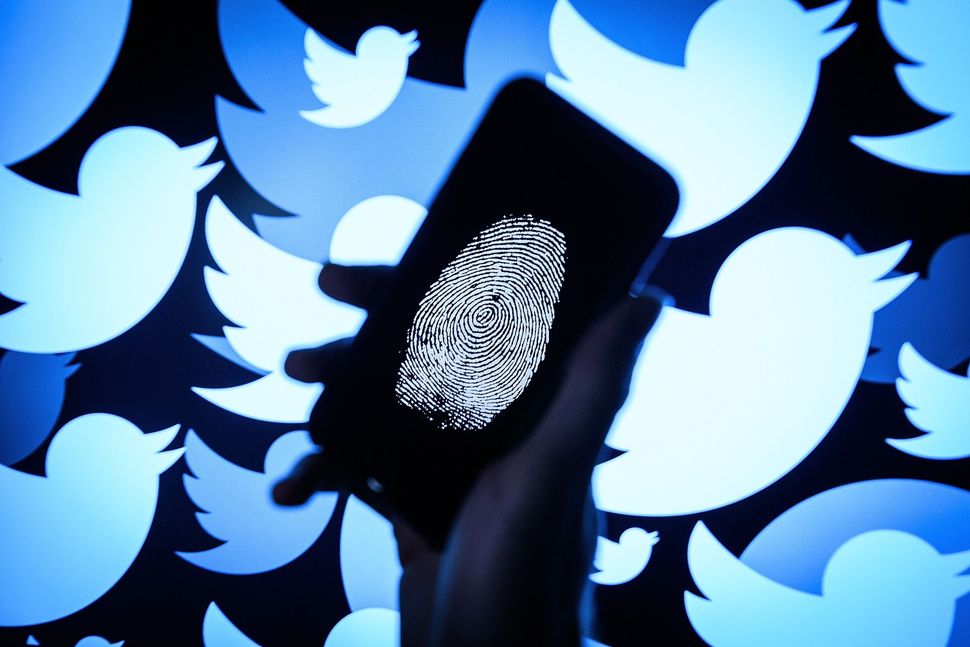 In this photo illustration, a thumbprint is displayed on a mobile phone as the logo for the Twitter social media network is projected onto a screen on August 09, 2017 in London, England. Image by Leon Neal/Getty Images

A group of neo-Nazis and domestic terrorists called The Base whose members vandalized a Wisconsin synagogue in 2019 are recruiting on social media platforms, on messaging apps and even in video games, according to new podcast episodes out Thursday from the Southern Poverty Law Center.

“It’s all done quite openly,” said the co-host of the podcast “Sounds Like Hate,” Geraldine Moriba. “We do have secret recordings from their vetting rooms but their recruiting is done openly on every social media platform.”

The podcast explores The Base’s methods of recruitment, but also their vetting process, which has been revealed through recordings leaked to the Southern Poverty Law Center by a whistleblower.

The leadership of the group, including 47-year-old founder Rinaldo Nazzaro, looks for military and combat experience. Leaders brag about their land ownership, saying members can use it to train. They go to “great lengths,” to figure out who is white, said Moriba, by interrogating the background of prospective members and asking if they have ever done a DNA test.

They worry that some people are “white-appearing but might be Jewish,” she said.

Founded in 2018, The Base is made up of small terror cells around the United States. They hope for a societal collapse that would leave room for a white ethnostate.

The group made headlines in January of 2020 after the FBI charged three members with firearms and alien-related charges. The criminal complaint against them mentions discussions of acts of violence against Black Americans and Jews.

Analysts used artificial intelligence to find patterns in the recordings.

For example, there were 37 mentions of Nazarro’s land, used as proof that he was putting his “name and land on the line” for the cause, said Moriba. Nearly half the recordings mentioned targeting by the system, the police, the government or the media. And a third of the conversations contain the phrase “not doing anything illegal.”

One prospective member, known as the Ecologist, talks about how he wants to liberate white people “through economic sabotage such as bombings” and arson.