Why is this Orthodox group playing nice with Cuomo, even after he shut down their wedding? 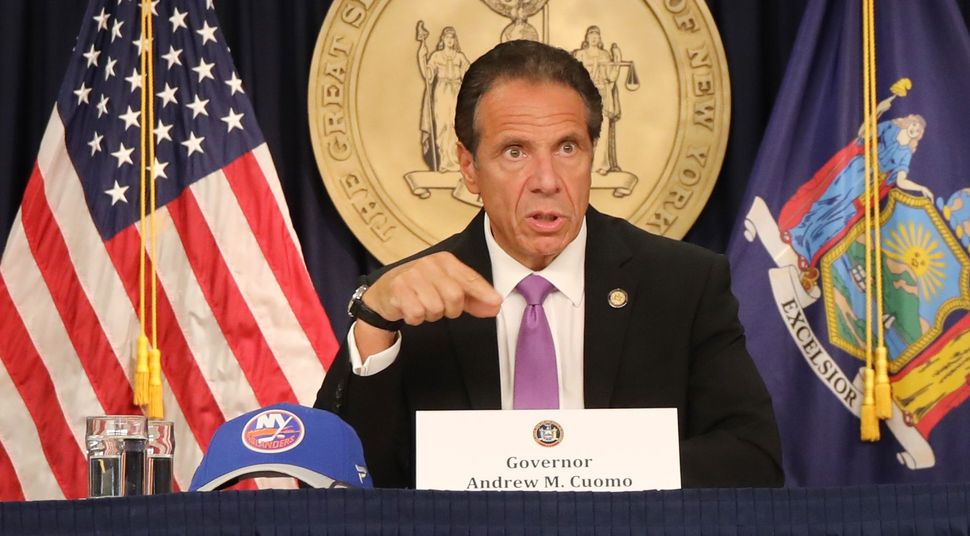 Around that time, Cuomo was getting a much friendlier reception from a different set of Orthodox leaders — those from the Satmar Hasidic community, who primarily live in Williamsburg — despite the fact that he’d recently shut down a major wedding for their community.

Instead of an earful, Cuomo got praise for both him and his father, former New York Gov. Mario Cuomo. He even got a chance to vent about being on the receiving end of Borough Park’s frustrations, according to excerpts from the call obtained by the Forward.

“It’s just hard to hear some of these things, on the personal level,” Cuomo said. “We get the numbers down, we open everything up 100%. That’s what I want. That’s what’s best for members of your community. We all want the same thing.”

“We want to work with the government,” said Rabbi David Niederman, the head of a major Williamsburg social services provider that is aligned with the Satmar community.

The diverging responses to Cuomo from Orthodox Jews at a fraught moment for the community illustrate the two groups’ approaches to politics: For the Williamsburg Satmars, the largest Hasidic group in the world, calm backroom conversations are preferable to public bloodsport. The Orthodox groups of Borough Park tend to play the game loudly and publicly.

In a statement in response to questions about the conversation, Jacob Adler, Cuomo’s liaison to the Jewish community, said that last week “there was a desire from all sides” to discuss coronavirus in New York State and move forward.

In Borough Park, Cuomo is public enemy number one. The neighborhood, home to a diverse group of Orthodox Jews, the vast majority of whom are Hasidic, is inside one of the state’s designated red zones — areas with high rates of positive tests for coronavirus where schools and businesses are shuttered, and religious gatherings of any kind limited to 10 people, no matter the venue.

Borough Park’s Jews have received the rules as heavy-handed, and some in the neighborhood rallied against them in street protests about two weeks ago. Many say Cuomo targeted their community without preparing them for the severity of the restrictions: The governor announced the 10-person worship limit hours after telling Orthodox leaders that they would be able to have 50% capacity in synagogues, they said.

Williamsburg is not in a red zone, or even an orange or yellow zone — there are no restrictions on Jewish life. But when journalists brought up the impending wedding to Cuomo on Friday, he said he would address it.

Weddings, like other lifecycle events, are major gatherings in Hasidic Judaism, a subset of Orthodox Jews who are primarily organized by adherence to a set of customs tied to a dynasty of rabbinic leaders, such as Satmar.

On Saturday, Howard Zucker, head of the state’s Department of Health, issued a formal order to close the wedding, for the grandson of one of the two dueling Satmar rebbes, or leaders, of Satmar Jews. The order, called a Section 16 order, is usually a rare enforcement step that has been used dozens of times during the pandemic, and carries a daily fine of up to $10,000.

The groom in the wedding scheduled for Monday evening is the grandson of Rabbi Zalman Teitelbaum, the spiritual leader of half the world’s Satmar community. The father of the groom is Teitelbaum’s eldest son, and the leader of the Jerusalem Satmar community. Previous Teitelbaum grandchild weddings have drawn thousands of followers for toasting ceremonies and lots of dancing, and under normal circumstances this wedding would have been no different.

For Monday, the Teitelbaum family had planned a more muted celebration than usual, the Satmar activist said: private events alongside a reception line for well-wishers, which likely would have still seen thousands of Satmar Hasidim, including those from Monsey, N.Y., an area with a high rate of coronavirus infection, come to Williamsburg.

Yet despite the health department order, Satmar leaders, as well as other Orthodox leaders on the call on Sunday, were quick to seek a peace summit with Cuomo.

Satmar is inclined, because of their unique beliefs, to work with secular government, said an activist from the community who spoke on condition of anonymity because he was not authorized to speak publicly. It’s the same reason why the community is anti-Zionist, the activist said: They think Jews should live under gentile rule until the messiah comes.

“That’s a key difference in how you see Satmar reacts and how others react, because that’s part of our core religion,” the activist said.

Cuomo knows this, and he’s used that pragmatism to his own political advantage: In 2018, he managed to wring a compromise necessary to passing the state budget from State Sen. Simcha Felder, an Orthodox representative of the Borough Park area, by appealing directly to the second Satmar rebbe.

Cuomo called Rabbi Aron Teitelbaum, leader of the Satmar community in Kiryas Joel, N.Y. to stop Felder’s disruption of budget talks over Felder’s proposal to eliminate state oversight of yeshivas. After the phone call, Felder backed down, and both sides claimed victory.

On the Sunday call, Cuomo held firm to the existing restrictions in the New York City area, which primarily affect neighborhoods with large Orthodox communities. He said he was open to a sit-down with Orthodox leaders from across the region to try and rekindle the relationship.

Cuomo, in speaking to Niederman, mentioned on the call that they’ve known each other for 20 years.

“We go back to my father’s time, with the ‘Shabbos goy,’” Cuomo said, a reference to the elder Cuomo’s stint, as a child, as the non-Jew who turns on a local synagogue’s lights on Saturday mornings.

“We have nothing but the deepest respect for you,” said Rabbi Yaakov Bender, the head of a yeshiva in Far Rockaway, which is in a coronavirus red zone. “Don’t let the emotions get to you, either.”

Participants told Jewish Insider that the call was productive, and could lead to a “reset” in Cuomo-Orthodox relations — despite the fact that Satmar leaders felt blindsided by Cuomo’s order to shut down the wedding, since it was issued on Shabbat.

Yet notably absent from the meeting were Borough Park leaders or representatives from Agudath Israel of America, the Orthodox lobbying and legal advocacy group, which is currently suing Cuomo over the coronavirus restrictions.

Avi Shafran, a spokesman for Agudath Israel, said that representatives of the organization would have participated if they had received an invitation.

“We still hold out hope that the governor will be willing to engage us in true conversation and an effort to de-escalate tensions in the community,” Shafran said in an email.

Some with knowledge of the call attributed the absence of Borough Park leaders to a “boycott” of Cuomo, while others called their absence a political move.

The Satmar activist said that his community was, like others, upset with Cuomo for singling out Orthodox Jews in his briefings on the coronavirus restrictions in recent weeks.

“We know that Cuomo is not an enemy of the community. The pressures of the times caused him to say stuff that’s really hurtful,” the activist said. “But we hope that we can start turning the page.”

Seth Barron, an associate editor of City Journal, said that while Cuomo’s shutdown of the Satmar wedding was to be expected in the pandemic, the governor does have to make up for what Barron described as feeding antisemitism by singling out Orthodox Jews.

“In the context of everything that he’s said in the last few weeks, and the somewhat ugly undue attention — there’s been a degree of scapegoating — he does owe it to the community to make it right,” Barron said.

Cuomo has said that he plans to unveil changes to the areas facing coronavirus restrictions on Wednesday.

“No one is gonna retain hard feelings once things fall into place,” Friedlander said. “They could boycott it, and tomorrow they’re best friends. This is the name of the game.”

Why is this Orthodox group playing nice with Cuomo, even after he shut down their wedding?