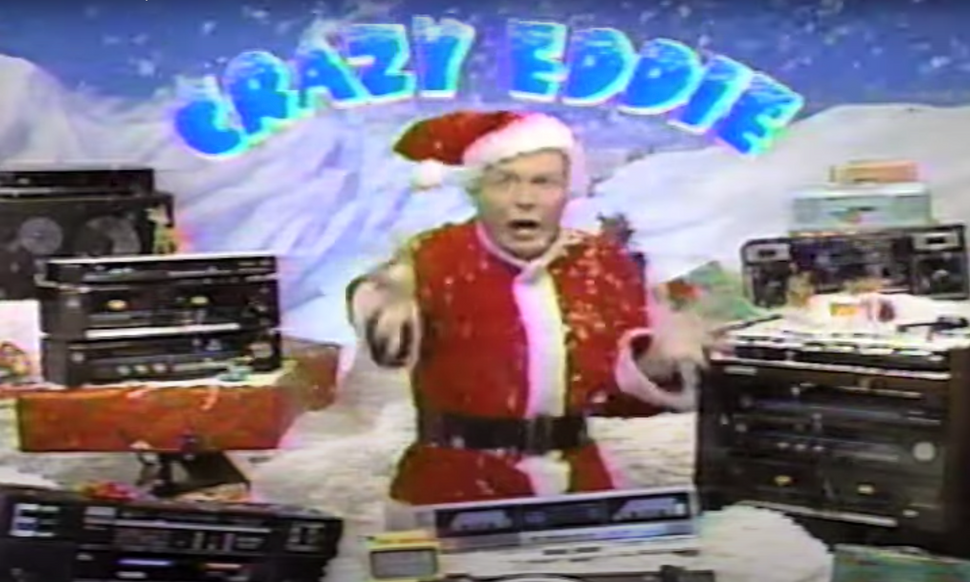 To stand out in a saturated political media market, the Republican Jewish Coalition drew on the “Crazy Eddie” audio equipment ads from the 1980s as inspiration for a TV advertisement running in South Florida this month. Image by Still via Youtube

In one advertisement, comic book speech bubbles pop on screen as a slick salesman delivers a sarcastic pitch for Joe Biden and the Democrats over upbeat music.

“This election only! A special offer,” he says. “Elect Joe Biden — get all his far-left friends too.”

The spot, sponsored by the Republican Jewish Coalition and running in South Florida, warns that the “radical left” will influence Biden when it comes to defunding police, raising taxes, and, yes, “pressuring Israel.”

As the presidential contest between Biden and Donald Trump nears its conclusion, Jewish groups have had to find distinct ways to reach their voters in the state. With the content of ads painting Biden as beholden to the far-left and Trump as an enabler of white supremacy already familiar to many voters, ad creators knew they had to try new tactics to attract eyeballs.

“It’s just wall-to-wall political spots right now,” RJC Executive Director Matt Brooks said. “We had to find something that would stand out, rather than the usual deep baritone voiceover thing.”

The Sunshine State easily leads the nation in political advertisements. By early October, $250 million in TV airtime had already been booked and more is pouring in, including Jewish philanthropist Michael Bloomberg’s recent $100 million pledge.

Florida has more than 650,000 Jewish residents, and while only 1% remains undecided according to a recent poll, they represent a crucial voting bloc in a state where the 2000 presidential election was decided by 537 votes and Trump won in 2016 with less than 50 percent of the vote.

“Any small segment in Florida, if they move one way or the other — because it’s always such a close state — is going to turn the election,” said University of North Florida political science professor Michael Binder.

The RJC is spending $3.5 million to run its advertisements on South Florida television, while Bloomberg has donated $250,000 to help the Jewish Democratic Council of America run its ads on social media. Bend the Arc said it was spending “six figures” on its swing state campaign, which includes the digital videos along with phone and text banking.

“The three most important states for us are Florida, Florida and Florida,” quipped Brooks.

Brooks said his organization’s ad is meant to parody the raucous “Crazy Eddie” ads from the 1980s in which a fast-talking salesman touts low, low, low prices on audio equipment while wildly gesticulating.

“It’s got people talking, which we want,” said Brooks.

Binder said the Crazy Eddie spoof was a smart approach and likely to resonate with older Jews who relocated to Florida from the tri-state area.

“Matt Gaetz defended — wait a second,” one of the actors says early in the ad. The camera zooms out as he turns to a producer.

“Gaetz invited a known Holocaust denier to the State of the Union?” the man asks. “What the f—-?”

Dove Kent, Bend the Arc’s senior strategy officer, said the ad is meant to draw in voters who have become numb to examples of racism and antisemitism over the last four years.

“The best way that we could let the information about Matt Gaetz really sink in was to show how [incredible] it is,” Kent said. “So in the ad everyday characters reacted the way people should react to this information if we weren’t all so desensitized to it.”

Tying Republicans in the state to white supremacy is a smart strategy, Binder said.

Kerri Steinberg, a professor at Otis College of Art and Design and author of “Jewish Madmen: Advertising and the Design of the American Jewish Experience,” said Jewish ad-makers have a long history of finding ways to stand out in crowded markets.

Steinberg said Bend the Arc’s Gaetz ad was a good example of this: by having the actors break character and go “off-script,” it may succeed in getting the audience’s attention.

“It reminded me of some of the tactics that were used in the creative revolution of advertising in the 60s, which was to disarm you somehow,” she said.

In addition to Bend the Arc’s advertisement pushing that narrative, the JDCA is also running its own eye-catching ad in Florida, a video that juxtaposes Trump’s speeches with grim images of 1930s Germany.

Gaetz’s office did not respond to a request for comment Thursday.

The Republican Party of Florida has fought back against such attacks with its own ads, sending a glossy mailer to voters this week stating that Trump and the party had “gone to extraordinary lengths to fight anti-Semitism” and accusing a trio of Muslim Democratic politicians, Ilhan Omar, Rashida Tlaib and Keith Ellison, of antisemitism.

Steinberg also noted that the flurry of opposing advertisements targeting Florida Jews was a reminder of the wide range of messages that will resonate with Jewish voters.

“It’s obviously not a monolithic market,” Steinberg said. “These ads speak to the diversity and complexity of Jewish life in America.”