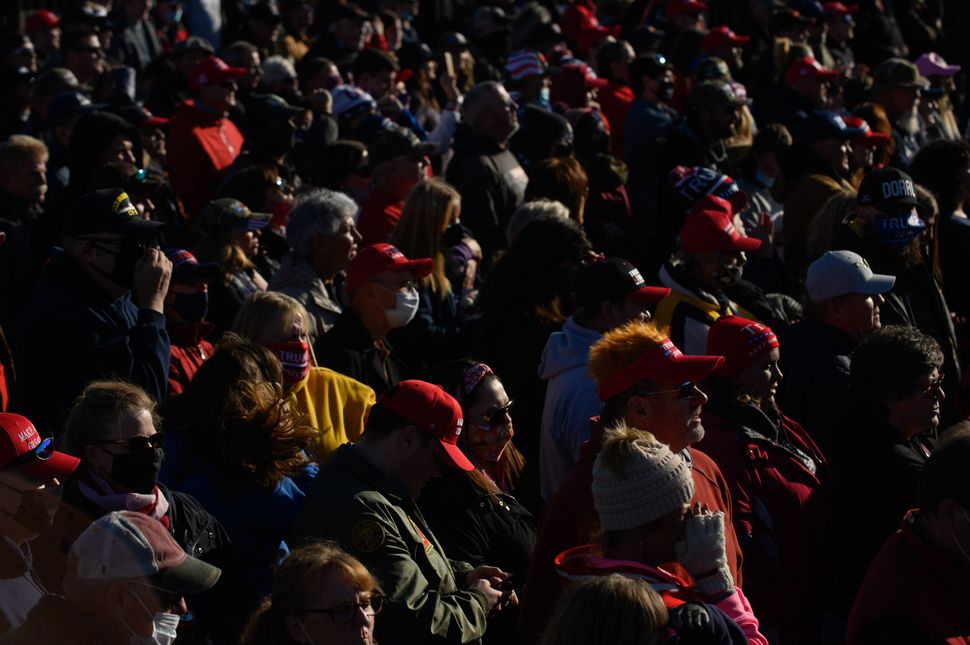 For the last six weeks, Phillip Richmond’s schedule has been as follows: An early morning workout at the gym, breakfast while catching up on the news, then three hours of phone banking for the Republican Jewish Coalition to support the re-election of President Donald Trump.

“After about three hours your voice gets tired,” Richmond explained. “But you just gotta do it.”

Richmond, 73, has been volunteering with the Republican Jewish Coalition (RJC) three to four days a week since April. But he’s since ramped up his efforts. He now makes calls to battleground-state voters every day of the week from his home office in Sarasota, Florida.

Richmond’s primary goal is to educate and inform people about the issues and facts he believes the mainstream media doesn’t give the President credit for, and particularly for Jewish issues he cares about. Since the beginning of the election cycle, Richmond has made over 5,000 calls.

“It’s too important,” Richmond said. “[Trump’s] reelection is critical for the future of our country, Jewish community, and for Israel.”

Richmond grew up in a Conservative Jewish household in Boston. He attended synagogue regularly, spent every Friday night of his childhood having Shabbat dinner, and lived across the street from his rabbi. Richmond also had an interest in politics at a very young age. At eight years old, he read two or three newspapers a day and looked forward to weekends when his father would get a copy of The New York Times.

Richmond studied political science in college and made a career as a retail executive; But his enduring passion for politics drew him to all kinds of volunteer projects for Republican campaigns over the last 15 years. From building yard signs, to assembling mailing materials, to shuttling prominent campaign representatives around various cities, Richmond has made political campaigning a central part of his life.

So when Trump announced his campaign for reelection in 2019, Richmond knew he wanted in.

“Trump has been Israel’s best friend,” Richmond said. “ Every single president since Clinton has promised to move the embassy to Jerusalem. Who did it? Donald Trump. Who negotiated peace treaties with Israel’s Arab neighbors? Donald Trump. People don’t want to give him credit for everything he’s done.”

Richmond uses these points and others while he’s phone banking for RJC. He follows a script that focuses on both Jewish and non-Jewish issues, but says he treats every conversation on an individual basis. In many instances, he says, “being Jewish” will come up in conversation.

Sometimes Richmond finds he has a lot in common with the swing-state voters he talks to and feels like he makes a genuine connection with people; Other times, he said he’s met with hostility.

“One of my favorite conversations I’ve had was with a rabbi who lived right outside Atlanta. We were the same age and he was supportive of President Trump.” said Richmond. “But I also had one woman tell me that because im Jewish, I should be ashamed of myself for supporting President Trump. I told her I was not ashamed of myself, and that that’s why we live in a free country where we have the freedom to express our opinions.”

Richmond explained that most undecided voters are willing to engage in conversation, while Democrats planning to vote for Biden usually hang up. On some occasions, Richmond said he’s been cursed at by Biden voters.

“The most important thing is being respectful of other people’s wishes, being tolerant, and hearing them out,” Richmond said. “Everyone’s got a right to their own opinion. They have a right not to talk to me. I don’t try to insult people and I don’t try to push people. ”

Having phone banked in various election cycles since 2006, Richmond says today’s political polarization and intolerance of other points of view is unlike anything he’s experienced. But, it’s also what motivates him to keep going. He intends to continue to make calls, volunteering overtime if he has to, until election day on Nov. 3.

Although Richmond rarely attends synagogue now, he says his connection with his heritage is a significant part of why he does what he does.

“I still have a strong feeling of who I am and how I was brought up. This is an important election not just for the Jewish community, but to keep this country going further out of balance.”