Jewish Trump donors still back him, just not out loud 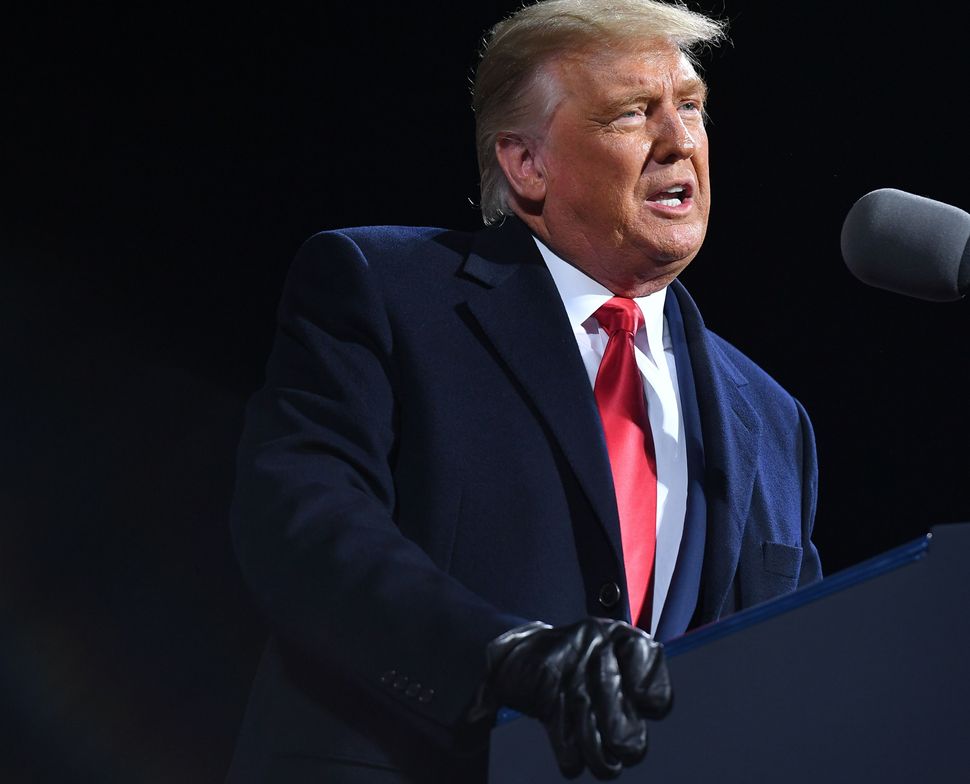 Three days before the Nov. 3 election, a prominent Trump supporter turned down my request for an interview.

“This issue is too hot and too divisive for me to speak about on the record,” he wrote in an email.

Describing himself as a “recovering Democrat,” this well-connected, well-respected Los Angeles Jew declined to do an interview about his support for President Donald J. Trump because he’s tired of being maligned by members of his community. “I am aware that there are people who dislike me or assume I am a misogynist, a racist and a homophobe — which I am not — because I identify as a Republican.”

He’s not alone in his discomfort. Republicans are in the minority among American Jewish voters, the majority of whom have historically voted for Democrats. This year, though, Republicans are backing an especially divisive and unpopular incumbent, whose policies and personal style — particularly during a global pandemic — are seen as abhorrent to half the electorate.

It has Jewish Republicans acting a little cagey.

“To come out as a Trump supporter — it’s almost what it’s like to come out and say you’re gay,” said Lawrence I. Stern, a Los Angeles attorney. “There is just this absolute Trump derangement syndrome.”

Of nearly 20 high-profile Jewish Republicans contacted for an interview, only a handful agreed to speak on the record. In one case, a prominent investor’s PR-company intervened, explaining that a public show of Trump support was “not a good look” for his client.

As national tensions on both sides of the aisle rise ahead of Tuesday’s election — a contest many assume will be contentious and protracted — Jewish Trump supporters remain steady in their allegiance but guarded in their optimism and public displays.

“I have lost friends because of my support for the president,” Matthew Brooks, executive director of the Republican Jewish Coalition told me.

And with Trump’s rival, former Vice President Joe Biden leading in the polls, Jewish Republicans are girding themselves for either outcome — and continued alienation.

“I have many friends who are Republicans who are afraid to admit it,” one Trump supporter told me. “They’re in the closet.”

Fred Zeidman, chair of the investment bank Gordian Group, and former chair of the board of trustees of the United States Holocaust Memorial Museum, isn’t shy about his support. But he wasn’t always a Trump fan.

Back in 2015, Zeidman met with Trump during the early stages of Trump’s 2016 campaign. But it wasn’t a good meeting: Zeidman told the future President he could not support a candidate who was openly hostile towards immigrants. It didn’t cohere with his role as chief steward of the Holocaust museum, Zeidman told Trump given how vital immigration was for European Jews during and after World War II. It also bothered him that Trump didn’t voice “pure support” for Israel at the time.

President Trump “has unequivocally proven to be the best president Israel could ever have imagined,” Zeidman said during a phone interview from Houston, Texas, where he lives.

“I served in the George W. Bush administration and I knew of his unwavering support of Israel from long before he was president. But even he could not pull off the things that Donald Trump has managed to pull off through his leadership style, as unique and gruff as it might be.”

Zeidman pointed to peace agreements the Trump administration helped forge between Israel, the United Arab Emirates, Bahrain and Sudan. “Then you think about the fact that Israel’s best friends now are the same countries that once wanted to destroy her? All of this is the result of the table laid by Donald Trump.”

Yet Zeidman’s support for the President has come with unexpected social consequences. He said he’s had to limit his involvement with the Reform synagogue he belongs to. “I don’t go to Jewish events anymore because I don’t want to get the crap kicked out of me,” he said.

In conversations with Jewish Republicans, many re-iterated the same reasons for supporting the President. On foreign policy, they applaud his favoritism towards Israel and his antipathy towards Iran; they support his aggressive approach towards China and his detente with North Korea. (“Has there been any serious threat coming out of North Korea in the last two years?” Zeidman asked.)

On the domestic front, most Jewish Republicans are in favor of Trump’s tax policy, his efforts at restoring American manufacturing and his pre-pandemic unemployment numbers.

On the other hand, his COVID-19 containment efforts got mixed reviews.

“Being president of the United States is all about leadership, and the fact that Donald Trump did not wear a mask was a shonda,” Zeidman said, using the Yiddish word for disgrace. “If you’re the leader, you don’t tell people everybody’s gotta wear a mask and then you don’t wear a mask. I think his communication was godawful.”

Another Jewish Republican who holds a prominent position in healthcare and who requested anonymity in order not to alienate patients went even further.

Trump, he said, “is a stubborn man and made himself look like a fool on things like masks and Hydroxychloroquine. And going after Fauci who is popular with 80% of Americans. That is the number one reason he will lose.”

That same Trump supporter added that ‘Operation Warp Speed’ is a good policy and should help. Though, “for now,” he admitted, “the virus is winning.”

When it comes to Trump’s personality, even the President’s fiercest defenders disapprove of his character. “I think he’s a narcissist,” Stern said. “What he has accomplished is excellent, but he’s not the personality or the person I would prefer as president of the United States.”

Another supporter flat out said, “I think Trump is a terrible, awful human being.”

He can also be a bit thin-skinned. When one Jewish Republican criticized Trump, he later found out the President personally wiped his name from the annual White House Hanukkah party list. Still, it didn’t deter him.

That’s because, he said, nothing constitutes a bigger turn-off — or threat — to Jewish Republicans than the ascendant progressive left which they view as antisemitic, anti-Israel, and, well, anti-American.

A few of them warned that if Trump were to eke out a victory on Tuesday it could be read as a repudiation of the chaos and unrest that filled the streets of American cities over the summer. “Everyone was equally appalled by the murder of George Floyd,” one of them told me. “That doesn’t justify burning down buildings, threatening communities or looting.”

Also on their list of grievances against Democrats, Jewish Republicans were incensed by the Mueller probe, the subsequent impeachment and what they consider unfair treatment of Trump’s Supreme Court nominees.

It’s enough fuel to drive both Democrats and Republicans to the polls in record numbers on Tuesday.

And if there’s anything both sides share, it’s fear and anxiety around the outcome of the contest, the integrity of the process, and the uncertainty of its aftermath.

“I’m hoping that whoever wins, the other party understands that this is the vote of the people and that’s what America is about,” Stern said. “I don’t want to hear, ‘He isn’t my president,’ whether it’s Biden or whether it’s Trump. I find that to be disgusting.”

In 2020, if Trump Jews and their critics have anything in common, it’s being on edge.

Jewish Trump donors still back him, just not out loud