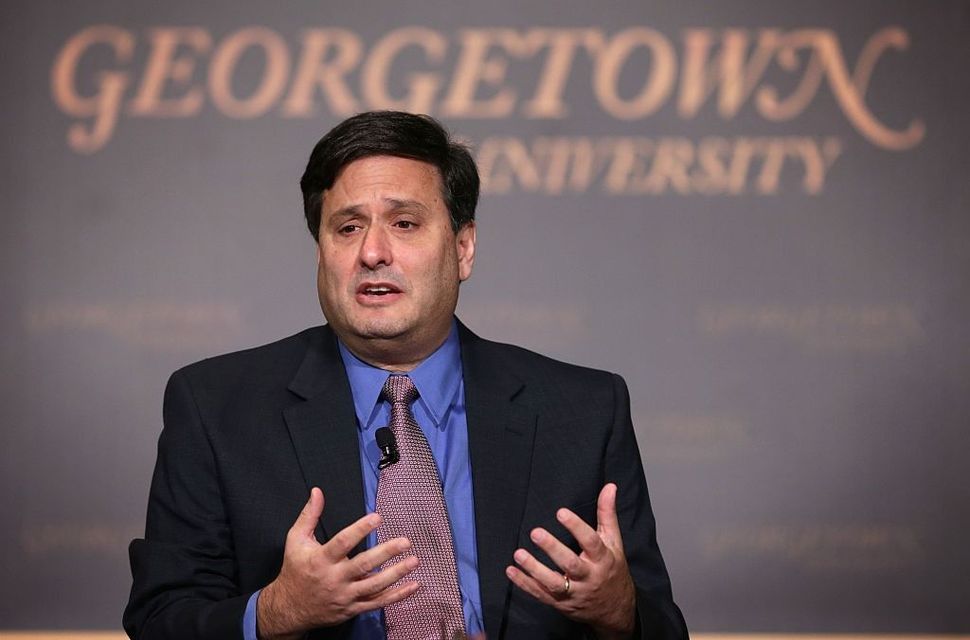 President-elect Joe Biden named Ron Klain, a Jewish attorney and longtime Democratic operative, to be chief of staff in his new administration Wednesday night. Klain served in the same role during Biden’s vice presidency, and also managed the Obama White House’s response to the Ebola outbreak.

“Ron has been invaluable to me over the many years that we have worked together, including as we rescued the American economy from one of the worst downturns in our history in 2009 and later overcame a daunting public health emergency in 2014,” Biden said in a statement to the Washington Post. “His deep, varied experience and capacity to work with people all across the political spectrum is precisely what I need in a White House chief of staff as we confront this moment of crisis and bring our country together again.”

Kevin Spacey portrayed Klain’s role assisting Democrats during the 2000 presidential election Florida recount in the 2008 movie Recount. His appointment means that prominent Jewish political operatives will have served as incoming chief of staff to the last two Democratic administrations. President Barack Obama selected Rahm Emanuel for the role when he took office in 2009.

Klain’s been relatively quiet about his religious identity, but Jewish Insider rounded up some interviews over the years that provide a bit of insight. Klain had a Bar Mitzvah at Congregation Beth-El Zedeck in Indianapolis, a synagogue affiliated with both the Conservative and Reconstructionist movements. He told The New York Times in 2007 that he and his wife Monica Medina, who is not Jewish, agreed to raise their children as Jews but also display a Christmas tree during the holidays.

Klain connected the current pandemic to the Exodus plague during a Zoom call with Congregation Beth-El Zedeck last spring, in a video first reported by Jewish Insider.

“The 10th plague — the slaying of the firstborn — was probably some kind of infectious disease. And so this Exodus is the first example of social distancing. The Jews are instructed on the night of the plague to put blood over their doors, but to stay in their homes,” Klain said. “When people say, ‘Well, we’ve never seen one of these stay-at-home orders,’ there’s a stay-at-home order in the Torah in the face of a plague. And that reminds us that throughout human history we’ve been dealing with these kinds of challenges. Our people have been dealing with these kinds of challenges and we’ve overcome [them].”

Biden’s pick of Klain is an early indication he intends on encouraging a return to mainstream, traditional governance after a raucous and often unconventional Trump administration. Many of the other top Jewish contenders for roles in the Biden administration also played leading roles under Obama, including an architect of the Iran Nuclear Deal and the former U.S. ambassador to Israel.

Here’s a look at a few of the people being discussed right now.

Sen. Bernie Sanders of Vermont, who battled Biden for the presidential nomination, is lobbying for an appointment as Labor Secretary. Sanders represents the left flank of the Democratic Party, far from Biden’s centrism, but he quickly endorsed the former vice president after dropping out of the race this spring, and the two campaigns collaborated on a handful of issues.

Some union leaders, however, remain skeptical about Sanders, and another Jewish politician — Rep. Andy Levin of Michigan — is also in the running, according to CNN.

One union leader, Randi Weingarten, president of the American Federation of Teachers, is being considered for education secretary.

For years, Democratic leaders have been caught between their traditional support of teachers’ unions and the charter-school advocates who were hostile to them. But the “red for ed” wave of teacher strikes over the last four years and a backlash against Trump’s Education Secretary Betsy DeVos has pushed Democrats like Biden to the left on education. Weingarten, who is married to a Rabbi Sharon Kleinbaum, has close ties to the Jewish community. Such an appointment would also be a meaningful nod to organized labor, which rallied around Biden this election.

Biden confidant Tony Blinken, a longtime diplomat whose stepfather survived Nazi concentration camps, is in the running for Secretary of State or National Security Advisor, Reuters has reported. Blinken spent the campaign reassuring organizations like AIPAC and the American Jewish Committee that a Biden administration would continue to support Israel and he praised the Abraham Accords in an interview with Jewish Insider.

Wendy Sherman, another Jewish diplomat, served as the lead American negotiator on the Iran Nuclear Deal and has been named as a possible pick for Secretary of State or ambassador to the United Nations.

Dan Shapiro, Obama’s Ambassador to Israel, may return to Washington in a senior policy position related to the Middle East in the administration.