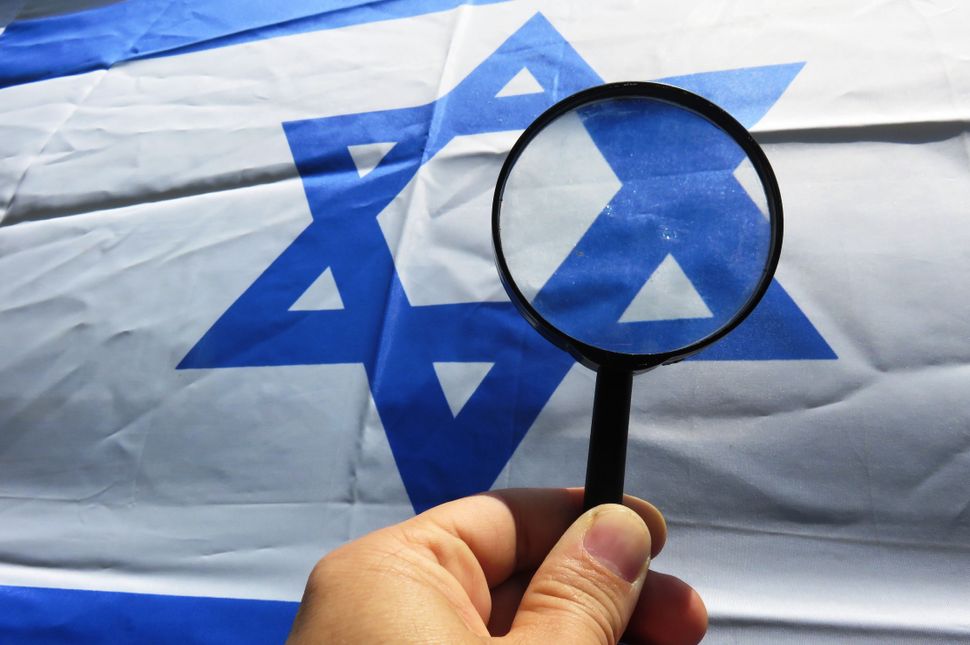 Welcome to FAHRENHEIT 411, a special newsletter on disinformation and conspiracy theories surrounding the 2020 presidential election. It is produced in partnership with the Institute for Strategic Dialogue, a London-based think tank that studies extremism, and written by Molly Boigon, an investigative reporter at the Forward.

If this email was forwarded to you, sign up here to get Forward newsletters in your inbox.

Despite polling showing Israeli Jews’ overwhelming support of President Trump, antisemitic communities on social media blamed Israel for his loss of the 2020 presidential election during the week ending Nov. 12.

ISD reports that the claim stems from pro-Trump activist and podcast host Nick Fuentes, 22, who, in one Nov. 8 tweet, claimed the president would eventually win reelection despite losing “after being betrayed and conspired against by Fox News, the Republican Establishment, the Department of Defense, and the state of Israel.” That post was shared nearly 600 times in antisemitic communities online, according to ISD’s hate tracker.

Fuentes spoke at the Make America Great Again rally in Washington, D.C. on Saturday, saying that the president is battling against “special global interests,” and “satanic globalist elites” who are opposed to “us, the people of Christ” and will eventually win the presidency.

He also said he “can’t wait for the day when Ben Shapiro,” the Jewish conservative broadcaster and Twitter agitator, “confesses that Jesus is Lord.”

In another Nov. 8 tweet that was shared more than 900 times, Fuentes shared a screenshot of Prime Minister Benjamin Netanyahu of Israel’s tweet congratulating former Vice President Joe Biden and Sen. Kamala Harris of California on their victory. Fuentes wrote that it “looks like the Groypers were right about Israel.”

The “Groyper army” is a loose network of white supremacists that emerged in 2017 and overlaps with Fuentes’ fan base. Groypers try to make their ideology more palatable by discussing Christianity and traditional values, while also espousing anti-immigrant, anti-feminist, anti-Israel, antisemitic and racist views. They claim to be keeping the mainstream conservative movement from helping the left destroy white America.

The name “Groyper” describes a variation on Pepe the Frog, which is a cartoon co-opted into a racist and antisemitic internet meme by users posting hateful messages with the frog’s image. Pepe the Frog is now generally seen as a symbol of the alt-right, as is the Groyper, which is essentially Pepe the Frog resting his chin on his hands. 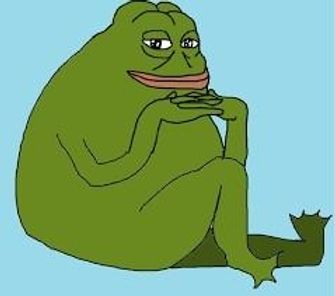 Before this new blame-Israel conspiracy off the election, Fuentes had also compared Jews in concentration camps to cookies in an oven; said that segregation was “better for them” and “better for us;” and referred to the Daily Wire columnist Matt Walsh as a “shabbos goy race traitor” (Shapiro, who is Jewish, runs the Daily Wire).

Jonathan Greenblatt is chief executive officer of the Anti-Defamation League. In 2017, he launched the ADL’s Center on Technology and Society in Silicon Valley to fight the rising tide of antisemitism and hate on social media. This interview has been lightly edited for length and clarity.

Boigon: The social media site Parler has drawn millions of new users from Facebook and Twitter who are fleeing what they see as censorship on mainstream platforms. Why does this matter?

Greenblatt: Parler is interesting because its founder, John Matze, talks about wanting to make it really a public square and a place where people who feel constrained on the major mainstream platforms can find their voice and have open conversations.

But a quick scan of the site finds that it’s really nothing like that at all, and in fact it’s become a cesspool of stereotypes and slander. The question we would have for John or for anyone is, does Parler want to be a public square? Or a frat party, where the loudest and most sensational voices are really the ones that get heard?

While there are a number of credible conservatives on the site — elected officials, public personalities — there’s also a dizzying array of white supremacists, QAnon enthusiasts, boogaloo proponents and so on. It’s troubling because it doesn’t appear that it’s truly a public square for all opinions, it seems like it’s skewed toward intemperate voices.

​​​Boigon: The ADL has written about how Parler mingles mainstream users and extremists. Why is that dangerous?

Greenblatt: The concern is that when you put conspiratorial rhetoric and hateful stereotypes alongside ordinary ideas as if they were all part of the public conversation, you risk legitimizing the worst voices. Without any basis for a user to differentiate fact from fiction, It becomes complicated.

Mainstream media has figured this out. There’s a reason why you don’t have Holocaust deniers on MSNBC or Fox or CNN.

The question is, do platforms have a responsibility to ensure that their users or their readers or their viewers, or whatever shape they might take — that they’re putting in front of them credible, fact-based views so they can make informed decisions about the content they’re consuming?

Boigon: Do you worry that the departure of some users from mainstream platforms to more fringe social networking platforms like Parler is a disincentive for Facebook or Twitter to keep cracking down on disinformation?

Greenblatt: Ultimately, it’s up to Facebook and Twitter. What we’re asking them to do, or any of the other mainstream services, is not to defy the laws of gravity — it’s to enforce their terms of service, which theoretically tackle these things.

I would think they would be pleased to have intemperate and hostile voices somewhere else, but I can’t really speak to their management.

I think it is a good thing, in some ways, if the biggest platforms with the most reach realize they have a responsibility not just to their shareholders, but to all their stakeholders. Not just to the people who sit around the table or in the boardroom, but in fact all of their employees who often come from the communities being attacked and marginalized by the worst voices.

I hope that his trend will encourage them on the path we want to see them move down much more quickly and much more comprehensively.

The next big disinformation fight is coming — over coronavirus vaccines

Disinformation includes “unfounded claims the vaccines aren’t sufficiently tested, that they’ll produce damaging side effects and that they’re being secretly funded by billionaires such as George Soros and Bill Gates.” Read more.

“Discussions within Facebook about the efficacy of fact-check labels reveal the extent with which the world’s largest internet platforms have struggled to handle the unprecedented flood of lies from the outgoing president.” Read more.

“Dorsey testified that Twitter flagged some 300,000 tweets between Oct. 27 and Nov. 11 for content that was disputed and potentially misleading, representing 0.2% of all U.S. election-related tweets sent during the period.” Read more.

The Forward’s coverage of hate, the election and coronavirus

We explored how Jews are praying outside to prevent the spread of coronavirus, wrote about how law enforcement agencies underreport hate crimes and covered the Georgia Senate candidate Jon Ossoff’s choice words for his opponent. 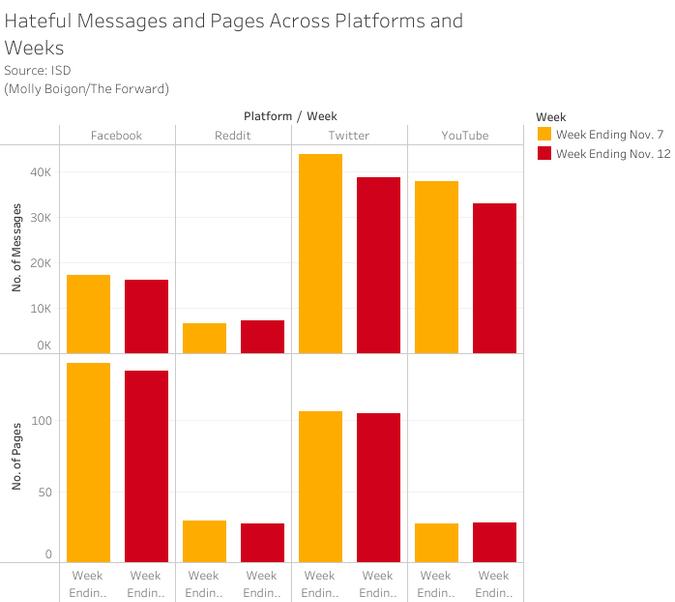 Thanks for reading this edition of FAHRENHEIT 411. Let Molly know what you think: boigon@forward.com.