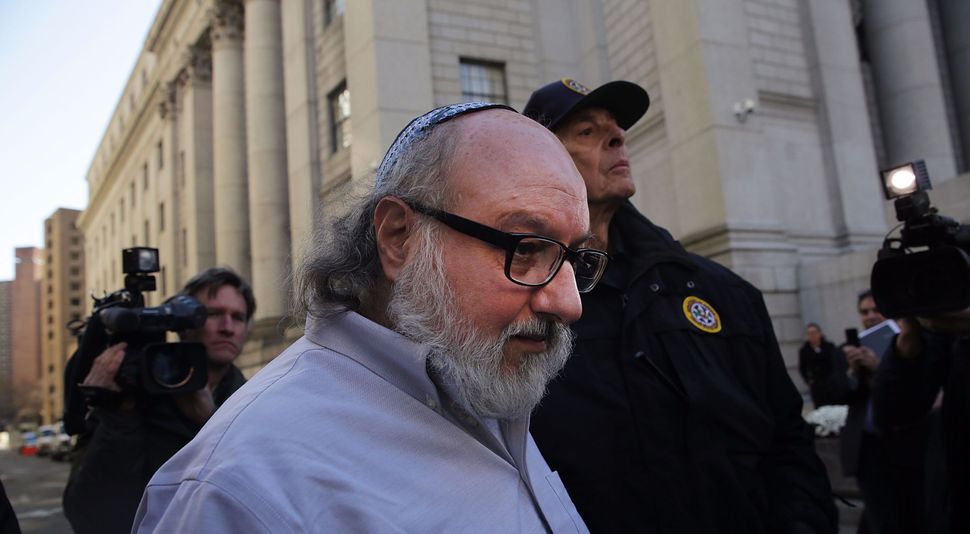 Jonathan Pollard, the convicted spy embraced by some Jews as a patriot for their people and rejected by others as a stain on it, is a free man.

The U.S. Parole Commission notified him today that it had terminated his parole and lifted the restrictions that were keeping him to within certain sections of Manhattan. He no longer must wear a wrist monitor or have the U.S. government monitor his computer use.

He is now free to travel anywhere, including Israel, for temporary or permanent residence. He was granted Israeli citizenship in 1995 and has said it was his dream to live there.

Pollard had tried to cast himself as a sacrifice for Israel who helped the Jewish state by compensating for the American intelligence community’s failings. Yet the question of his imprisonment divided the American-Jewish community for decades.

Pollard, 66, said he was happy to finally be able to assist his wife, Esther, who is battling an aggressive form of breast cancer. He attributed his ability to survive 30 years in prison to the love and support of his wife.

A former civilian analyst for the U.S. Navy, Pollard was convicted of passing U.S. military secrets to Israel and in 1987. His imprisonment strained U.S.-Israeli relations; Israeli leaders, in addition to high-profile American Jews, tried unsuccessfully over the years to secure his release first from prison and then parole.

After serving a 30-year sentence, Pollard left prison in 2015. He was put on probation under conditions that required him to remain in Manhattan and imposed a 7 p.m. to 7 a.m. curfew.

In a statement, his attorneys, Elliot Lauer and Jacques Semmelman, said that over the past several months they have “communicated with the U.S. Department of Justice and the U.S. Parole Commission, emphasizing that Mr. Pollard has had an exemplary record, both as a prisoner and as a parolee, and that there is every reason for confidence that he will be a model citizen after his parole restrictions are lifted.”

That argument was persuasive. The Parole Commission concluded that he would be unlikely to violate the law further, said Nicole Navas Oxman, a spokeswoman for the Justice Department.

In the statement, Pollard thanked Israel’s ambassador to the United States, Ron Dermer, acting in behalf of Israeli Prime Minister Benjamin Netanyahu, for their efforts in his behalf.

“Mr. Pollard is deeply grateful to so many others in the U.S., Israel, and around the world who have helped devotedly … [and to] all people of good will who have kept him in their prayers and hoped for this day.”

Pollard is the only person in U.S. history to receive a life sentence for spying for an ally and the only American citizen convicted of such a crime to be sentenced to more than 10 years in prison, Haaretz reported when Pollard left prison in 2015.

Upon his arrest, most Jewish groups stayed silent, hoping to diffuse charges of “dual loyalty.” Over the years, some American Jews distanced themselves from what they saw as his disloyalty and lack of patriotism for the country of his birth.

The Forward, for example, argued against leniency for him.

“Jonathan Pollard is not a Jewish martyr,” wrote New Republic editor Martin Peretz.“He is a convicted espionage agent who spied on his country for both Israel and Pakistan (!) — a spy, moreover, who got paid for his work. His professional career, then, reeks of infamy and is suffused with depravity.”

Yet his allies turned his sentence — life in prison — and then the conditions of his parole into crusades, especially once it was understood that a particular affidavit considered to have moved the judge in his case, Aubrey Robinson Jr., towards the maximum penalty was classified and never made public.

Since his sentencing, Pollard’s staunchest supporters have been in the Orthodox community. Rabbi Avi Weiss, who had gained prominence for his efforts to push Soviet Russia to allow its Jews to emigrate, visited him during his early years in a maximum-security prison. Farley Weiss, a leader of Young Israel, an Orthodox synagogue group, has been an important ally as well.

Over the years, other leading Jewish organizations, such as Hadassah, B’nai Brith, the Conference of Presidents and the Union for Reform Judaism, also came to push for Pollard’s release.

Malcolm Hoenlein, longtime leader and now vice-chairman of the Conference of Presidents of Major American Jewish Organizations, called news of Pollard’s release on Friday “very welcome and overdue. I hope now he can go and live with his wife in peace and quiet in Israel.”

Pollard’s punishment was also a perennial subject of discussion between Israeli leaders and American presidents, with Israeli Prime Minister Benjamin Netanyahu frequently bringing the issue up with both Barack Obama and Donald Trump.

While in prison, Pollard divorced his first wife, Anne Pollard, and later married Esther Zeitz in a Jewish ceremony at Butner Federal Correctional Institution, a minimum-security prison in North Carolina, where he remained until his release on parole in 2015.

Shortly after his release from prison, Pollard was invited to speak before the heads of major Jewish organizations in New York amid his battle to ease his parole conditions. The meeting had been announced via telephone, and not email, so as not to alert the press.

But the Forward obtained advance notice of the meeting, which led to Pollard scuttling plans for a speech. A representative for Pollard said at the time that his lawyers feared that if he said anything more than basic remarks, his words could be used against him, and potentially send him back to prison.

Jewish organizations — as well as the Jewish House leaders Rep. Jerry Nadler and Rep. Eliot Engel — continued advocating for Pollard about the conditions of his parole, which included wearing an electronic monitoring bracelet and being confined to his home from 7 p.m. to 7 a.m.

Allies such as Weiss had also tried to interest President Donald Trump, beloved by many Jews for moves he’s made related to Israel, in the Pollard’s case.

In 2017, Trump commuted the 27-year sentence of another high-profile Jewish prisoner, Sholom Rubashkin, the former CEO of the largest kosher meat-processing plant.