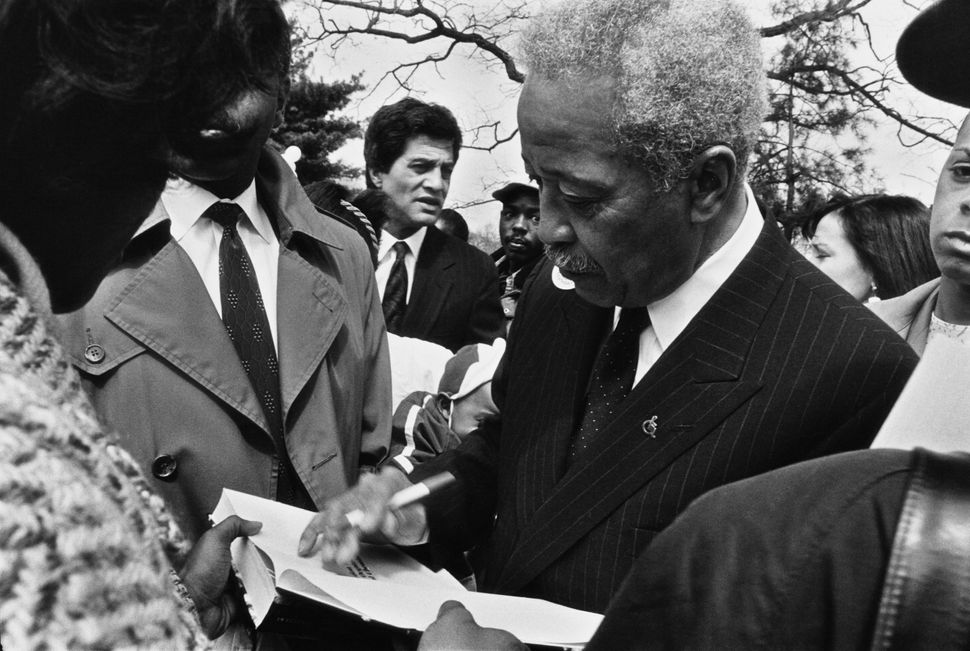 David Dinkins, New York City’s 106th mayor but its first Black one, died at the age of 93 on Monday.

To many, his name is associated with the 1991 Crown Heights riots, in which the Lubavitcher Rebbe’s motorcade resulted in the death of a Black child. Riots, injuries, property damage and the murder of an Australian-Jewish student, Yankl Rosenbaum, followed. Dinkins had run on a platform of racial healing. The riots stained his tenure. Before, during and after his mayoralty, however, Dinkins forged diverse and deep relationships with various Jewish communities in the city.

“I believe there are more important issues in this election than race and religion. Let’s face it. There is no Black way to fight crime, and there is no Jewish way. I offer a New York way,” he used to often say in speeches at both synagogues and churches.

Below, find three testimonials from Jewish leaders whose lives he touched.

A lot will be written about Crown Heights, but it’s much deeper than that. In 1975, two weeks after the “Zionism is racism resolution” was passed at the United Nations, David Dinkins signed a statement from a group called “BASIC” — Black-Americans In Support of Israel Committee.

Mayor Dinkins was attacked by Louis Farrakhan because he publicly spoke out against Farrakhan’s antisemitism. He was involved in the Soviet Jewry movement for many years. During the Scud missile crisis, when the missiles were falling on Israel, he said “Let’s go to Israel and show solidarity.” We pulled together a 24-hour trip to Israel which was like a whirlwind. Nobody was going to Israel then. It was a huge deal.

Even until recent years, he would go to events at the Jewish community — anything he’d been invited to. The Israeli Consulate. The JCRC. Israel bonds. He would be there. He was at my wedding, my two sons brises, their bar mitzvahs. He was at my daughter’s bat mitzvah. He was like a second father. That was the kind of guy he was.

David never failed to recognize officials with whom he worked, staff who did the work behind the scenes and citizen activists who so often go unnoticed. Every speech he ever gave included a litany of these individuals which often drove listeners crazy, but was a deep indication of his respect for others and his determination that they be acknowledged.   I had the pleasure of working together with David when he ran for Mayor, and I ran to succeed him as Borough President. I had the honor of joining a trip to Israel which he led with a wonderfully diverse group of citizen activists and faith leaders. And I was able to work with him on issues critical to the future of Manhattan when I became Borough President.

In one instance, a new biotech science building was being built in Northern Manhattan with some public financial support. It was being built on the site of the Audubon Ballroom which had been the location for much of Malcolm X’s speech-making and the site of his assassination. I wanted to preserve the façade of the building with an appropriate historical marker—a position opposed by the planners, the local officials and preservationists. David supported me, and the façade and marker exist as a result. In another instance we worked together to invest significant dollars in protecting and expanding the borough’s museums and public libraries in the face of serious cuts.

Randi Weingarten, president of the American Federation of Teachers

Former New York City Mayor David Dinkins was a compassionate leader who fought for justice for all New Yorkers, our nation, and indeed people everywhere. While Dinkins faced huge challenges, he did much to make the city fairer and left a formidable social justice legacy for all of us.

Mayor Dinkins was a gentleman politician, wedged between two mayors with outsized personalities. As the city’s first Black mayor, he was acutely aware of what was riding on his leadership. And he was a kind soul, a good man rarely found in politics.

David was part of a group of a barrier-breaking charismatic leaders who came of political age together in Harlem — leaders like former New York State Secretary of State and union negotiator extraordinaire Basil Patterson, Cong. Charlie Rangel, and Manhattan Borough President Percy Sutton. They helped build back Harlem and NYC from the ravages of the 1970s fiscal crisis, and demonstrated it could be done through the lens of justice and equity.   The strength of the Harlem leadership was that it understood power is based on promoting social justice and building coalitions. The civil rights movement was their beacon, but political leadership was an integral part of creating change.

Mayor Dinkins inherited a city in turmoil, with financial and racial divisions that he hoped to ameliorate. Instead of simply succumbing to budget cuts, he successfully kept the library system open, a lifeline to young people throughout New York’s neighborhoods. He cleaned up Times Square, and rebuilt public housing. And he made the US Open shine.

Fairness for everyone was so deeply ingrained in David Dinkins that he made certain to use his mayoral perch to promote equality. As a tweet on Tuesday from the Irish Consulate in New York reminds us: “30 yrs ago Mayor David Dinkins marched — in the face of opposition — with an Irish LGBT Organization, ILGO, in NYC’s St Patrick’s Day Parade. His leadership and solidarity helped build progress towards a more inclusive sense of Irishness and towards Irish participation in NYCPride.”

He also started to reinvest in public schools and brought many new faces and activists into the ranks of city government. Mayor Dinkins hired more police and promoted community policing. Crime went down, but intra-community tensions were not resolved.

A staunch believer in coalition politics, especially the coalition between Jews and Blacks, this tension became the deepest problem of his administration, caused by a tragic and unfortunate incident. In 1991, a young black child, Gavin Cato, was accidentally killed by a car carrying Hasidic Rebbe Menachem Schneerson. The car ran a red light at a Crown Heights intersection. The neighborhood erupted in response and tragically, an innocent yeshiva student, Yankel Rosenbaum, was murdered in retaliation.

While Mayor Dinkins immediately rushed to the scene to comfort both families and try to assuage both the Black and Hasidic communities, the effects cast a long shadow on the city, on the rest of the mayoralty and on Mayor Dinkins’ legacy. I remember — I taught in Crown Heights at the time at Clara Barton High School.

To those young people who marched together for Black lives and who seek out a multi-racial coalition for social justice, to those of us who, as Jews, fight for the strangers among us, to those of us who have dedicated our lives — or will do so — to social change, Mayor Dinkins’ vision of our city as a gorgeous mosaic is one we must take and pass on.

In his concession speech, David Dinkins was eloquent as always, saying to his disappointed supporters, “Never forget that this city is about decency, about dignity, about working people struggling to make a life for their children. My friends, the gorgeous mosaic is alive.”

Now it is up to all of us to make his dream a reality.